With polls indicating a tightening of the presidential race, Vermont Senator Bernie Sanders gave an interview Friday in which he hinted at concerns that Democrat Joe Biden was conducting such a right-wing campaign he was in danger of losing to President Donald Trump.

In the interview on the PBS Television program “Firing Line,” hosted by Margaret Hoover, Sanders made a feckless appeal for his “good friend” Biden to do a better job of packaging his right-wing program in more populist rhetoric about jobs, wages and health care.

Subsequent media reports said Sanders has privately been urging the Biden team to bring onto the campaign trail so-called progressives such as Alexandria Ocasio-Cortez in the hope of convincing workers and especially youth to turn out and vote for the long-time senator and former vice president. 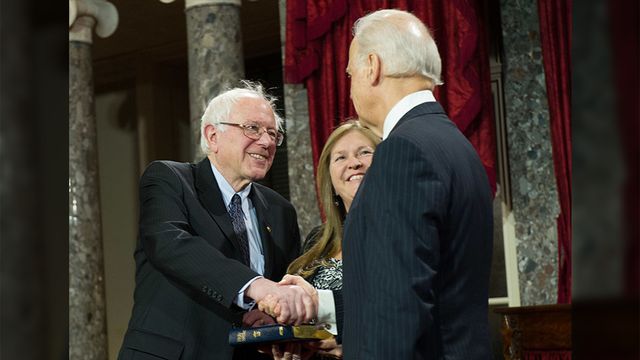 Vice President Biden congratulates Sen. Bernie Sanders during a re-enactment of the swearing-in ceremony for his second term in the U.S. Senate. (Credit: sanders.senate.gov)

“What we have got to do is gin up the enthusiasm by talking about what Biden will do for working families in America and do a better job in exposing to the working class of this country the degree to which Donald Trump has sold them out and in fact is a fraud,” Sanders told Hoover.

He made no substantive suggestions on policy questions, and when Hoover pointed out that the platform adopted at last month’s Democratic Party Convention omitted the key planks in his so-called “political revolution,” Sanders readily acknowledged the fact.

“It’s not a great secret that Joe Biden is far more conservative than I am,” he said. “Joe Biden does not believe in Medicare for all. I do. I believe in the Green New Deal. Joe does not.”

If anything, Sanders seemed eager to establish Biden’s conservative credentials in order to counter Trump’s efforts to cast the Democratic Party and Biden as puppets of “far-left” and “socialist” forces.

In reality, the nomination of the pro-war corporate shill Biden and the right-wing character of his campaign constitute a devastating refutation of the central claim of Sanders and the various pseudo-left organizations that support him: That the Democratic Party can be pushed to the left and transformed into an instrument of progressive change through pressure from below.

Sanders’ acknowledgment of Biden’s refusal to support even his mild reform proposals did not prevent him from affirming his full backing for the Democratic campaign. Since pulling out of the race for the Democratic nomination last April and endorsing Biden soon after—reprising his endorsement of Hillary Clinton in 2016—Sanders has demanded that his supporters line up behind Biden and attacked those who criticize the Democratic ticket.

He merely pleaded with Biden to “do a better job in getting out” his economic agenda.

During the interview, Sanders twice repeated his pledge to work with “conservative Republicans,” “independents” or “anybody who understands what a threat to the society Trump is.”

He explicitly articulated the central argument being used to attempt to channel rising working class opposition behind the Democratic Party, the organ of a faction of the same capitalist ruling elite that is represented by Trump.

Citing the fact that “this president does not believe in democracy, does not believe in the rule of law, does not in fact believe in the Constitution of the United States,” he declared: “So I would hope that while people will have strong disagreements with Biden—I do—for the moment, put that aside. That’s what coalition politics is about. You come together for a common goal. The goal is to defeat Trump.”

What are Sanders’ central concerns?

Biden is so brazenly running a right-wing campaign and spurning any serious appeal to the social needs and grievances of the working class that Trump could win the election. This would be a devastating blow to the Democratic Party from which it would never recover, after the debacle in 2016.

To lose an election in the midst of a pandemic which has already cost 200,000 lives, under conditions where the president has been caught lying to the public in order to play down the danger, protect the stock market and reopen businesses at the expense of workers’ lives, where there are Depression levels of unemployment, and where hunger, homelessness and poverty are soaring, would discredit the Democratic Party for all time.

The greatest fear animating Sanders, and the Democratic Party as a whole, is the collapse of the party as an instrument to contain and divide working class opposition and protect capitalism from socialist revolution.

Sanders gave his interview under conditions where Biden has lurched further to the right since the party conventions in August and the official start of the fall campaign on Labor Day.

Last week Biden told Stars and Stripes that he would keep US troops in Afghanistan, Iraq and Syria indefinitely and would likely increase the military budget; he used an interview on CNN to attack Trump failing to uphold US “national security” and disrespecting the military by calling US troops killed in battle “suckers” and “losers.” And he gave an economic nationalist speech to United Auto Workers union officials in Michigan in which he attacked Trump for failing to keep his “buy American” promises.

This followed his speech in Pittsburgh and subsequent campaign ad in which he denounces “violent” protesters and demands that they be criminally prosecuted.

Neither Biden nor Sanders has said a word about the targeted assassination, directly ordered by Trump, of Portland, Oregon anti-fascist protester Michael Reinoehl, or the fascist murder of two anti-police violence protesters in Kenosha, Wisconsin.

On the contrary, in his PBS interview, Sanders explicitly endorsed Biden’s law-and-order appeal and stated, “Burning down buildings, to my mind, has nothing to do with the fight for racial justice.”

These developments confirm the analysis made by the WSWS from the onset of Sanders’ presidential campaign in 2016. We wrote in February of that year: “Sanders’ aim is not to create a ‘revolution,’ as he asserts in his campaign speeches, but to prevent one.”

For workers to follow Sanders’ advice and subordinate their struggles to the election of Biden would be, as the World Socialist Web Site has explained, a “fatal political error.” As we explained in a September 9 Socialist Equality Party Political Committee statement titled “The Civil War Election”:

Trump did not emerge from nowhere. He expresses in the most unvarnished form the essentially fascistic, anti-democratic impulse of the American ruling class as a whole. … The working class must direct its opposition to the underlying disease of which Trump is an expression. …

Trump’s fascistic rhetoric is an attempt to beat back a growing social movement of the working class against the policies of the corporate and financial oligarchy.

The Democratic Party, however, represents another faction of the same oligarchy. Its appeal is to dominant factions of the military and the intelligence agencies as the arbiters of political power to whom it will turn if Trump refuses to leave office. Its main aim is to suppress any form of social opposition that threatens the interests of the ruling elite. …

If the Democrats were to lose on November 3, or even if they were to win, the response would be no different. They would immediately offer an olive branch to Trump and the Republican Party.

History shows that all such policies of opposing fascism and war by subordinating the working class to “democratic” sections of the capitalist class end in catastrophe. In the 1930s, these policies, imposed by the Stalinist regime in the USSR and its satellite parties around the world, politically paralyzed the working class. They led to the victory of fascism in Spain and France and paved the way for World War II.

The way forward for the working class lies in the expansion of the class struggle and the unification of all sections of workers and youth, both in the US and internationally, against social inequality, dictatorship and war through a conscious struggle to put an end to capitalism and establish socialism. This means a complete break with and implacable opposition to the Democratic Party and all of the political representatives of the capitalist ruling elite and the fight for workers’ power.

This is the perspective fought for by the Socialist Equality Party and our candidates for US president and vice president, Joseph Kishore and Norissa Santa Cruz.

Sanders endorses Biden: The “political revolution” that never was!
[14 April 2020]

From Medicare-for-All to “Masks-for-All”: Bernie Sanders and the incredible shrinking “political revolution”
[5 August 2020]