More than 200 coal loading workers at terminals in Newcastle, 160 kilometres north of Sydney, are continuing to impose rolling strikes and work bans in opposition to demands they accept greater workplace “flexibility” and eroded conditions. Port Waratah Coal Services (PWCS) is attempting to push through a regressive new enterprise bargaining agreement at its Carrington and Kooragang terminals in the coal loading facility that is the largest in the world.

Negotiations for a new industrial agreement have dragged on for more than eight months. The unions are seeking a 5 percent wage increase, while the company has offered only 3.5 percent on the base rate. The central sticking point, however, is the company’s refusal to budge on its demands for greater productivity and “flexibility”, including ending limitations on the exploitation of contract labour, ending the need for management to consult with the unions on changes to work hours and shifts, and the jettisoning of a longstanding disputes settling procedure. 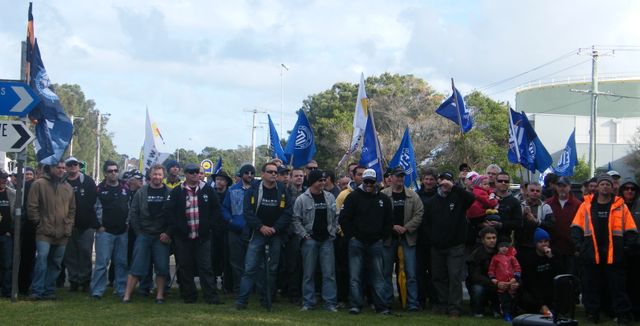 The workforce must now be provided with advanced notice regarding work changes, including the use of contractors. If any of these changes are challenged, the status quo remains while a lengthy dispute resolution process is initiated. This can end up in arbitration. The same conditions apply in cases of disciplinary action taken by management against workers.

The previous setup cemented the unions’ privileged role within the Port Waratah Coal Services terminals. They worked with management to ensure there was no resistance among workers to the company’s restructuring. The unions have boasted that there has not been any serious industrial action at the terminals for around 15 years, despite widespread job cuts and productivity hikes. The workforce was reduced to 245 from 225 three years ago. One worker told the World Socialist Web Site that he estimated that in the last 20 years, the terminal workforce had been cut by nearly two thirds. He explained that manning on his shift had been slashed from 28 to just 11 over that period.

The unions are pleading with the company to maintain their services. An MUA spokesman told the Associated Press: “We’ve enjoyed a mutually beneficial relationship for many years. We just don’t understand why after 30 years of a good relationship they’ve decided to reduce conditions of employment.”

The shift is part of a wider restructuring within the Australian coal industry, triggered by falling demand in Asia. PWCS, whose two terminals exports mostly thermal coal to Japan, China, South Korea and Taiwan, has recently accepted voluntary reductions in contract tonnages from the majority of Hunter Valley coal producers. The PWCS has also put on hold the construction of a new fourth coal terminal in Newcastle that it pursued in peak of the mining boom.

Australian coal companies’ profits are being hit by falling demand and plummeting prices, under conditions of increasingly aggressive competition for the Chinese and Asian export markets, from rival producers in Mozambique, Colombia and Indonesia. The Australian Coal Association has reported that 9,000 jobs have been eliminated in the industry in the last 15 months, with over 600 of these going across the Hunter region. The Coal Association also commissioned research released this month that estimated that more than half of all coal exported through Newcastle is being sold at a loss. 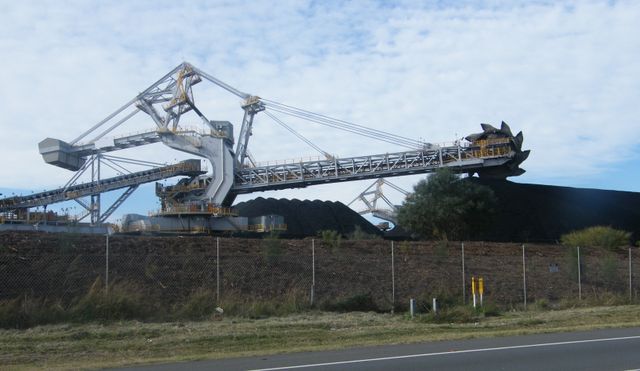 Like many of the major mining companies, PWCS now regards the previous consultation mechanisms with the trade unions as an unacceptable overhead cost, impeding the instantaneous workplace changes it deems necessary to respond to the far-reaching shifts now underway in the global economy.

Last year, BHP Billiton chairman Jac Nasser claimed that operating costs in the Australia mining industry “were among the highest in the world”, and he insisted the company’s “operational decision making” was being threatened by the “constant threat of veto” by the unions. Similar sentiments have been expressed by executives at Rio Tinto and Xstrata, which own a combined 67 percent stake in PWCS. The Hunter Valley coal producers are looking to not only slash costs in the mines, but across the transport and port services that they claim adds $US10 per tonne to coal production costs.

The Labor government of Prime Minister Julia Gillard, in collaboration with the trade unions, is spearheading the pro-business restructuring drive. It previously intervened in the Qantas dispute, outlawing any industrial action by the workforce after the airline was provocatively grounded in November 2011, in support of Qantas management’s so-called “right to manage.” Like the mining companies now, the airline refused to permit the unions any veto power over the use of contract labour and introduction of “flexible” shift changes. In the mining industry, the Gillard government has repeatedly warned the unions that wages must be lowered in order to maintain profits and investment.

The union bureaucracy is making every effort to comply. At PWCS, the five unions involved in the dispute have isolated the workers and limited the industrial action taken, in order to minimise the impact on the company’s operations. The unions have not called for industrial action by mine workers in the Hunter Valley to back the PWCS workers, and have specifically ruled out instructing TWU drivers to stop delivering coal to the terminals when it is loaded by managerial staff and scab labour during strikes.

In order to defend their interests, PWCS workers need to take the dispute out of the hands of the unions and construct new organisations of struggle, a rank and file committee, to turn out to other workers who are facing similar attacks, in the first instance other mining workers, and mobilise a broad industrial and political campaign against the mining companies and their Labor backers. This requires a new political perspective, based on a fight for a workers government and a socialist program.