La Sirga and In the Fog: When will the “fog of war” settle?

This is the fif th in a series of articles on the recent San Francisco International Film Festival, April 25-May 9. Part one was posted May 16, Part two on May 22, Part three on May 24 and Part four on May 27.

La Sirga (The Towrope), from Colombia, was awarded Honorable Mention in the “New Directors” category at the 2013 San Francisco International Film Festival. On a limited budget and with a handful of relatively unknown actors, director-writer William Vega gives viewers a remarkable glimpse of life in a rural lakeside village in the Andes named La Concha. 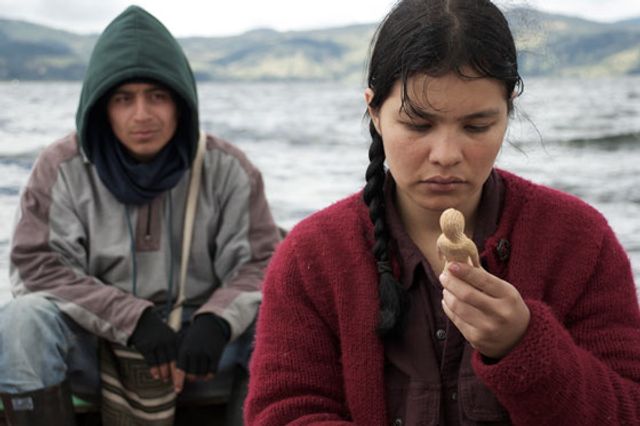 The film opens on an expanse of field and lake battered by wind and fog. We see a scarecrow shivering on a stake and something or someone moving under a piece of turf through water. Into this cold, wide open setting, a young woman, Alicia (Joghis Seudin Arias), trudges sturdily, seemingly unfazed, until she collapses in the mire only to be rescued by a young man in a water taxi, Mirichis (David Fernando Guacas).

With her body lying in the hull of his rickety, waterlogged boat, Mirichis guides her to a rough hewn home on stilts where her Uncle Oscar (Julio Cesar Robles) is struggling, along with others in the impoverished community, to rebuild a rundown inn named “La Sirga,” develop a fish hatchery and sell flowers, all with the aim of achieving some economic stability. We learn, from Oscar, that Alicia’s family home has been burned down in some type of coordinated attack. Oscar asks, “What color were their arm bands?”

Without a big budget, Vega’s film provides a refreshing, crisp, clear view of life in La Concha. It achieves this largely through vivid cinematography and deliberately slow movement, which seems to match the human pace in this remote village.

It is odd, however, that within perhaps the first 20 minutes of La Sirga, the viewer gets most of the extremely truncated story. The remainder of the film is largely a portrait of how Alicia gradually blends into the village and its collective struggle to overcome poverty, isolation and the looming, mysterious threat from without.

Alicia’s immersion in La Concha’s life allows us a glimpse of the villagers among whom a suppressed, but easily accessible harmony exists, despite the centrifugal forces of economic dislocation and war. This is the motor engine of the film, but while it captures one’s attention, there is a vacuum in the narrative that imbues the whole effort with the feeling of little more than an extended prologue.

It is amazing, given La Sirga ’s oddly circumscribed (even stunted) story, that its characters become interesting at all. The desire to learn more about them is simultaneously the film’s great strength and its core weakness. We get a little taste of the magic that Vega and the precocious young actors can create, but this is all cut short by the filmmaker’s refusal to actually tell a detailed and rich drama.

This weakness in La Sirga may be attributable in part to the flirtations of a novice director; eager to get one’s attention, but still too unsure of himself—or just too far out of his depth—to really work through the necessary interaction with the filmgoer.

The difficulties are more likely the result, however, of Vega’s own confusion about the subject matter. Although details are militantly kept from the viewer, one presumes that “the war” animating the background is the Colombian government’s longstanding effort to wipe out the FARC [Revolutionary Armed Forces of Colombia] guerillas in conjunction with paramilitary forces and US imperialism, most recently, via “The War on Drugs.”

La Sirga is a serious effort, which strives to capture, and frequently does capture, the concrete experience of ordinary people caught in the middle of a war-torn environment. However, the work is incomplete because the filmmaker meticulously omits the world outside La Concha. One is left with only a turbid sense of the larger social forces at work, the big historical players who threaten to crush all these individuals. These forces and players are reduced to nothing more than unmentionable and indescribable ghosts.

To an extent, this is understandable, given the general murkiness of the drug war, but the omission is still a failure that makes La Sirga seem more like a rough draft or a quick sketch.

Moreover, in this vacuum, a disturbing ahistorical, apolitical tendency develops that leaves the characters and story somewhat bloodless and unreal. The characters tend to float around aimlessly, vaguely connected in one way or another to “the war.” The society in which they live is reduced to little more than “the color of one’s armband,” with no rhyme or reason to any of it.

Nonetheless, with more thought and experience—or perhaps by basing himself on the work of a more accomplished writer—a mature Vega may yet make a genuine contribution to cinema.

In the Fog, an adaptation of a short story by Vasili Bykov and directed by Sergei Loznitsa, suffers from many of the same problems as La Sirga. However, due to the subject matter—the Second World War—the film’s erasure of so much of what distinguished the Nazi and Soviet forces in their struggle in eastern Europe seems less like an accident and more a reflection of the filmmaker’s or writer’s own despairing misreading of history.

The fate of the main character Sushenya (Vladimir Svirskiy)—a stoic, somewhat Christ-like figure wrongly persecuted by both the German army and the partisans—seems designed to leave one with the false, and all too facile, impression that the war was merely a hazy, indecipherable disaster.

Set in 1942 in a Belarusian village, the film opens quite strongly. With the screen black, we hear the distorted crunch of boots marching through the snow blending seamlessly with a dog or maybe a wolf growling. The boots are then revealed to be those of prisoners marching. We see the backs of several weary heads marching into a filthy camp.

They arrive and the scene shifts to a translator, working for the Germans, explaining to an anguished crowd the exemplary execution about to occur: “Ignore the partisans or this will happen to you.” Amidst the lamentation, the men are hanged off-screen, which the viewer experiences through powerful, auditory means. The scene ends with a shot of farm animals rooting around a dirty barn.

The next scene gives us two men, one especially determined and somewhat irritated, slogging through the snowy forest toward a rustic cottage where a family is resting peacefully for the evening. Sushenya, a loving, but quiet father, and his cherubic young son sit together. The father carves a wooden toy while an attractive, doting mother hovers in the background. We soon learn that the two men are local partisans who have come to take Sushenya from his family and execute him.

The promising opening slowly degenerates into a rudderless and bleak story that highlights above all else the goodness and honesty of Sushenya as an individual—at once the most selfless and most persecuted figure. Through a very long and winding series of flashbacks we learn that the men hanged in the opening scene were saboteurs—railway workers who engaged in train wrecking to disrupt Nazi supply lines.

Of the four workers arrested by the Nazis, only one, Sushenya, was spared. For this reason, the partisans decide to execute him as a collaborator without further inquiry, despite his claims of innocence and close connections to the village.

In a flashback, the rail workers discuss the sabotage, and one complains that there has been no real change for them under the Nazis. He laughingly equates both sides and his comrades make no rebuke. The attitudes expressed by the workers in their brief dialogue are out of step with their daring act of sabotage and even more inconsistent with the militancy of the partisan executioners.

A number of disjointed elements like this arise throughout the film, steadily weakening the story. By the time we reach the absurd ending, which seems meant only to hammer home once more how very good and how persecuted Sushenya has been, we are left with nothing but inexplicable tragedy.

Loznitsa does well recreating the look and feel of the time and place, the acting is good and at points the story is effective in its depiction of the brutality and confusion of war as experienced by a few individuals. Ultimately, one wonders what is new or interesting about seeing the war from this claustrophobic, foggy perspective. In what way do the unjust sufferings of Sushenya add anything to the huge number of movies on the subject?