Hundreds of people have been displaced from their homes in Brisbane, the Queensland state capital, after a fire swept through top floor units in one of eight multi-storey apartment blocks at the Cathedral Place complex in Fortitude Valley last Sunday night.

The 1.5-hectare complex was built by Devine Limited in 1999 and promoted as a “city oasis with resort-style living.” It has over 514 units, housing approximately 1,600 people—mainly foreign students and young workers.

The fire erupted in a fifth-floor apartment in H block at about 4.40 p.m. It spread rapidly through upper-level units in the building and also caused damage in the neighbouring G block. Thick plumes of black smoke engulfed the area, forcing residents to evacuate the entire complex. Up to 50 firefighters were mobilised, coming from as far away as Pullenvale, 15 kilometres west of the city, to fight the blaze. 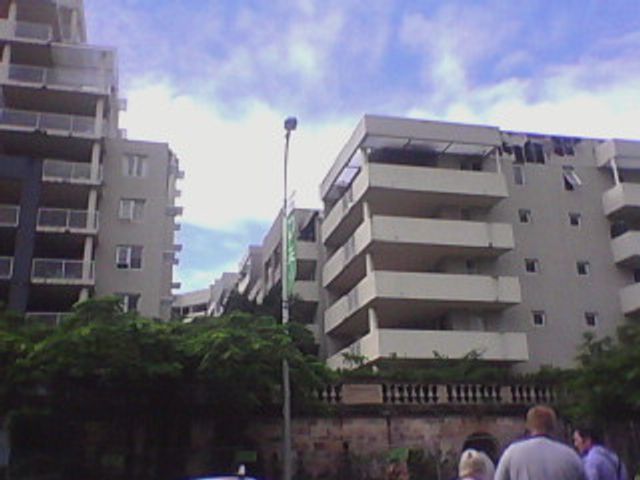 While there were no fatalities, three H block residents had to be rescued from their upper floor apartment by firefighters using a hydraulic ladder platform. Another woman, who lived in the fifth floor unit where the fire began, was carried unconscious from the building. She remained in hospital a day later, being treated for smoke inhalation.

G and H block residents can only now enter their units under supervision to collect personal documents, medications and other basic needs.

H block—home to an estimated 200 people—has been deemed uninhabitable by fire authorities, with eight apartments incinerated, sections of the roof missing and several floors collapsed. The remainder of the building is water damaged. Hundreds of residents have been forced to find alternative accommodation, possibly for several months.

G block is undergoing fire compliance inspections and residents have been told they might be able to reoccupy in the next week or so. None of the residents has received any significant support from government authorities.

An initial Queensland Fire and Rescue Service (QFRS) and Queensland Police Service investigation on Monday determined that the fire started accidentally from a candle on a bedside table. Queensland Assistant Fire Commissioner Ian Mitchell told the Brisbane Times that the blaze spread into the open ceiling cavity of the apartment building via a light fitting or ceiling vent. “Once the fire got into the ceiling,” he said, “it was able to travel across the ceiling spaces.”

Mitchell said that unlike other buildings, the complex’s developers were not required by law to install fire walls between the apartments in the roof cavities. None of the Cathedral Place units, moreover, was equipped with fire sprinkler systems. Australian construction codes do not require sprinklers in buildings less than 25 metres high.

In other words, the extensive damage—and near loss of life—at the apartment complex was a result of inadequate construction and fire prevention standards. This is the direct responsibility of successive local, state and federal governments, including the Labor Party administrations that controlled the Brisbane City Council and state government for decades.

There are also questions about the adequacy of fire alarms. One resident, Tushar Jalan, 23, told the Brisbane Times that false fire alerts were a regular part of life in the complex. He became so accustomed to them that “when he heard the fire alarm at 4.40 p.m. on Sunday he casually put on his clothes, grabbed his wallet and phone and then walked out of his unit without any sense of urgency.”

An E block resident said his alarm did not activate until at least 15 minutes after the fire broke out. Others said they heard no alarms and remained in their apartments, oblivious to the rapidly spreading blaze.

D block resident Jasa Rakus, 35, told the Courier Mail he only discovered there was a fire when he began smelling smoke. He said he had reported a non-functioning alarm to building security two weeks earlier.

Firefighters told the media that the blaze highlighted the dangerously under-equipped state of the city’s firefighting resources. An unnamed firefighter told the Courier Mail on Monday that fire crews were “lucky” because the blaze was in daylight and “on the corner of a relatively low building.”

“Had it been midnight, or in the middle of the complex,” the fireman said, “it would have been devastation.” The hydraulic ladder platform used to rescue three residents, he continued, was only capable of rescuing three people at a time. Central Brisbane had a “massive” need for a “turntable ladder” to enable the rescue of dozens of people but “the powers-that-be think we don’t need that.”

In line with the federal Labor government’s austerity measures and public sector budget cuts by the Queensland Liberal National Party government, QFRS management has reduced inner city fire crews to just eight men and two trucks during the final week of each month. If the Cathedral Place fire had erupted at the end of May, fire crew manning levels would have been inadequate to deal with the blaze. Budget cutting has also led to the temporary closure of fire stations if firemen report in sick.

While residents and firefighters are raising concerns about fire safety standards, alarms, and the lack of fire-fighting resources, the city council and state and federal governments have maintained a deafening silence over the Cathedral Place blaze.

It was the same with the Euro Terraces apartment fire in the Sydney working class suburb of Bankstown that led to the death of Connie Zhang and the serious injury of fellow Chinese student Yinou Jiang on September 6 last year. Every level of government washed its hands of any responsibility for the tragedy or the plight of the residents.

A Socialist Equality Party investigation into that fire and the circumstances surrounding it revealed that far-reaching economic, social and political factors contributed to that disaster. These included inadequate building fire safety standards, the increasing de-regulation and privatisation of construction and safety certification processes, and the running down of fire and other emergency services by state and federal governments. The SEP investigation also revealed the close relations between governments, banks and financial institutions, property developers and building companies, as well as the housing affordability crisis facing students, young workers and millions of ordinary people.

All these underlying causes point to the subordination of one of the most basic social rights—to the right to affordable, safe and decent housing—to the profit interests of banks and big business. What has been revealed about the Cathedral Place fire so far indicates that the same factors have led to another serious fire, one that could have been a major catastrophe.