The docudrama A Murderous Decision [Eine mörderische Entscheidung], recently screened by the German television companies ARTE and ARD, uses a mixture of fiction and documentary footage to consider what happened in the Afghan town of Kunduz four years ago.

The central figure in the film is the Bundeswehr’s [German army] Col. Georg Klein, the former commander of the German camp at Kunduz who on September 4, 2009 ordered the worst massacre by German troops since the Second World War. He gave the order for the bombardment of two tankers that had been captured by the Taliban, resulting, according to NATO sources, in the deaths of 140 people, mainly civilians, women and children from nearby villages. 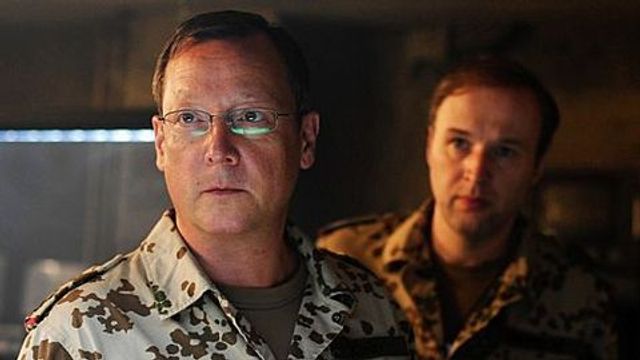 This event marked a major shift in German policy and provoked a crisis in the government shortly before the 2009 federal election. Franz Josef Jung, the defence minister at the time, had to resign after the election, and the new defence minister, Karl-Theodor zu Guttenberg, sacked the army’s general inspector Wolfgang Schneiderhan and state secretary Peter Wichert. Investigations by the German army and NATO took place, as well as legal proceedings. In addition, a parliamentary investigative committee was established.

Although the facts that gradually came to light clearly showed that the air attack in Kunduz was a war crime, all the investigations into Col. Klein and his colleague, Master Sergeant Maik Wilhelm, were abandoned. The parliamentary committee declared them to be free of any guilt, the federal prosecutor justified the killing of civilians as compatible with international law and the current defence minister Thomas de Maizière promoted Klein to the rank of brigadier general early this year.

The Kunduz massacre thus served as a green light for future military interventions by the German army. It represented a baptism by fire for Germany as it returned to the world stage as an aggressive military power.

In this context, Raymond Ley’s A Murderous Decision is doubly explosive. He presents the horrific events of the night of the bombardment and shows the brutality of a war that until then had been legitimised as a “humanitarian reconstruction mission”. At the same time, the television film’s airing comes during the debate over an attack on Syria, an attack that could provoke a much wider conflict and is once again being presented as a measure to protect the local population.

The strength of Ley’s work is the authenticity with which this flagrant war crime in Kunduz is portrayed. Based on documentary footage, agency reports, witness statements and interviews with relatives of the victims, protocols from the investigative committee and sections of dramatic film, the film brings the terrible events to life. It begins and ends with appalling pictures of burning people and charred bodies that went round the world, and of a badly burnt girl in a hospital who was interviewed by the team.

While the film opposes attempts to downplay the bloody consequences of the Kunduz attack, it remains at a generally superficial level and avoids making sharp and clear statements at many points. Even where the well-presented facts in the film raise important questions, these are often not probed. One gets the sense that the producer, director, actors and several influential participants may have had different conceptions, which were smoothed out through compromise.

From the “reconstruction mission” to “targeted killing”

The first part of the film shows the German soldiers in their camp in northern Afghanistan. It appears at first as though the army’s claim to be leading a peace mission is genuine and that they want to dig wells, educate schoolchildren, build hospitals and create a democratic framework, etc.: the justifications used by the government and opposition parties to lengthen the intervention. The unit that Klein commands is called the provincial reconstruction team (PRT). Under NATO operations, use of “lethal force” is restricted to situations of clear self-defence.

The group of young German soldiers quickly experiences something different. They are shown going on patrol where they are caught in up in combat situations. In the course of an ambush one soldier, Sergei Motz, is fatally wounded. Col. Klein, in his fictional guise, is a sensitive individual. He listens to classical music, believes in Christ, and is visibly shaken by Motz’s death. Later film clips featuring the real Klein showing absolutely no remorse over the consequences of his actions contradict his portrayal in the film.

Considerable time is given to interviews with Motz’s parents, who come from Kazakhstan and blame themselves for allowing their son to go to Afghanistan. They also believed the political propaganda. The father, who fought in Afghanistan with the Soviet army, summed it up at his son’s coffin, “Why, why?” and “For which ‘new Germany’?”

Klein’s attitude changes after Motz’s death. He explains that Berlin has considered the new situation and issued a new directive. Klein continues, “If the situation requires it, then you shoot. And not just at the legs”. In the next scene this order is implemented. A young soldier deliberately kills an Afghan car driver to the disgust of a colleague.

The film’s presentation makes it appear as though the new procedures were appropriate and justified measures to protect the soldiers. In fact, as Schneiderhan reveals in a blunt interview, German politicians were complaining that the army had set up a “holiday camp” in northern Afghanistan and were looking for military successes.

The directive meant a fundamental strategic change for the German army’s intervention in Afghanistan. The new regulations, the so-called soldiers’ pocket book, which the defence ministry finalised in the summer of 2009, explicitly allowed the use of violence against individuals who “display hostile behaviour”. With that the targeted killing of opponents or supposed opponents was sanctioned, without arrest or judicial proceedings—a policy that had been outlawed in Germany following its experience with the Nazi dictatorship.

The lies about Kunduz

In its most powerful scene the film once again portrays the series of events from the night of September 3-4, 2009. In the command centre of secret Task Force 47, made up mostly of special forces’ officers, Colonel Klein decides to bomb the sandbank in Kunduz where the tankers had been captured by the Taliban several hours earlier, and where inhabitants of nearby villages had gathered to collect petrol. After the return of a reconnaissance plane, which counted about 70 people in the area, Klein called in American F15 bombers.

The exchange of words with the American pilots, who verbally relay the radio command, sheds light on the determination of Klein to implement the bombardment. The US proposed further reconnaissance overflights, or a “show of force” where the planes fly low over the area to warn the civilians: these proposals were summarily brushed aside by Klein with the agreement of Wilhelm (played with the appropriate arrogance of the officer caste by Franz Dinda) and a fictional intelligence officer (also well portrayed by Axel Milberg). Instead they knowingly provide the pilots with false information: the German army’s camp is endangered, there is “enemy contact” and “friendly forces” are not in the area—although the fate of one of the drivers of the tankers was unknown. The German pair insisted that those gathered around the tanker were exclusively Taliban “terrorists”.

In response to the question whether the tanker or the people should be targeted, Klein responded “the people”. Instead of one 500-pound bomb as recommended by the pilots, he ordered two to be dropped.

In this scene, the film conveys a clear picture: the German army commander consciously ordered a war crime on the basis of lies, without the existence of any immediate danger to his own soldiers.

However, this message is immediately weakened, and Klein is presented as a “tragic figure”. He bows before a cross and begs for forgiveness—in contrast to the real Klein who showed no remorse during the parliamentary investigation.

The film switches between a historical-political account and superficial character studies, presenting Klein as someone who, under pressure, succumbed to a moral dilemma and made the wrong decision.

The film minimises the significance of the bloody air strike in Kunduz, although Ley himself noted that “Klein (was) the first one who led what was clearly war for us there”. He regarded Klein’s promotion to brigadier general as a “scandal”. Kunduz had “opened Pandora’s box” and shown “the path the German army intends to take”.

The film was obviously produced under great pressure. It was boycotted by the German army and politicians. Klein refused to give an interview, and the army refused authorisation for soldiers who were willing to do so to give interviews, or for the use of film from its archives.

In addition, the current debate in cultural, media and academic circles over the need for Germany to accustom itself once again to killing and openly addressing the issue of war exerted ideological pressure. This undoubtedly influenced the NDR and ARTE, the television companies who hired Ley.

Professor Andreas Schreitmüller, the head of the film department at ARTE, who was responsible for editing the film, together with Christian Granderath, head of film at NDR, explained in a comment that in foreign military interventions “it was not possible to play by the rule book”, and the reality is “especially for a military commander much more complex” than it appears in the normal reports. “The moral dilemma cannot be resolved. And that is what this film shows us in a nightmarish way”.

Granderath expressed satisfaction that Ley’s film came out “without denouncing the participants, without any demonization, and without cheap political slogans”.

Frank Beckmann, the head of television programming at NDR, argued similarly: “Raymond Ley dealt with an existential decision: Should I take the risk of injuring or even killing innocent civilians in order to protect my own soldiers? This film does not condemn. It leaves the viewer with a question: ‘What would I have done in that situation?’”

This was the tone of nearly all the subsequent reviews and television discussions about the programme. Often led by former pacifists and “lefts”, the discussions provide the background music for the preparation of new military operations and the return of full-scale militarism in Germany.