The small provincial city of Burgos in northern Spain has witnessed mass protests and unrest in the working class neighbourhood of Gamonal.

The unrest was sparked when construction work began aimed at converting the main street in Gamonal into an upmarket boulevard. The neighbourhood has been opposed to the project due to its high cost of 8.5 million euros, the elimination of car lanes, the reduction of free-parking space and the construction of underground parking, which will cost 19,800 euros per each parking space for a 40-year lease.

A petition to stop the project was organised in November last year which gathered thousands of signatures. When the mayor ignored the petition and refused to meet with organisers, a 3,000-strong demonstration took place. 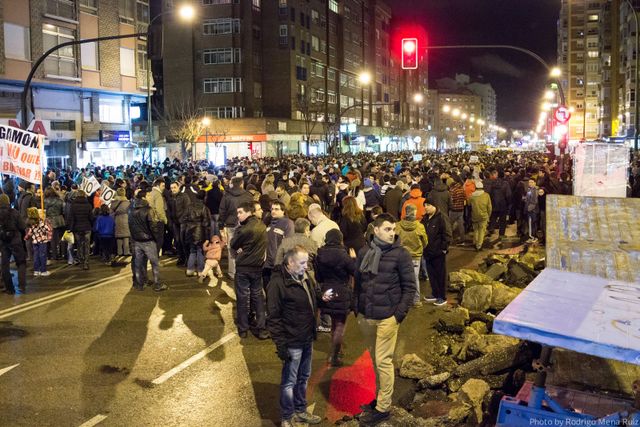 On January 10, another protest was held. The next day, attempts to prevent machine operators moving in, accompanied by chants of “Gamonal does not want a boulevard!”, were violently dispersed with rubber bullets by the police who arrested 17 demonstrators, including one minor, and left two injured.

More protests, barricades and police violence took place in the following days. On Sunday evening, around 1,000 people gathered in front of the local newspaper Diario de Burgos, yelling, “They've sold out; they're not really reporting on what's going on here!”

The mayor called in 200 anti-riot police who repeatedly charged the demonstrators. Even the Special Operations Group (Grupo Especial de Operaciones, GEO), whose main function is to “counter and respond to terrorism”, was sent to clamp down on the protest from the neighbouring city of Valladolid. Madrid Mayor Ana Botella condemned what she described as atentados, the Spanish word used for terrorist attacks.

Until now, over 46 people have been arrested, accused of “public disorder and damages,” most aged between 18 and 24. Five have been charged and released on bail set at 3,000 euros, and seven more are being threatened with prison sentences. 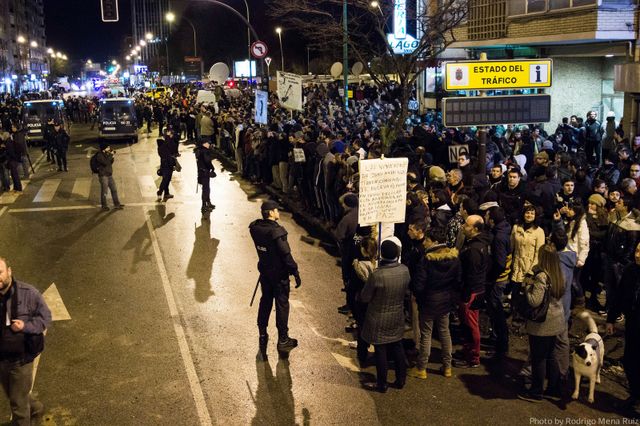 State Secretary for Security Francisco Martínez Vázquez said in an interview on SER radio station that the violence in Gamonal was the work of “violent groups that travel” to different parts of Spain. “Once again,” he continued, “we see how violent groups infiltrate neighbourhood movements, generating enormous social damage.”

This is a lie. Apart from two of those arrested, the other 44 are inhabitants of Burgos. The ruling class’s political representatives and its media hope that by blaming the unrest on outside agitators, as they have done in other mass protests and strikes in the past years, they can hide the explosive social conditions that have been generated by the world capitalist crisis and their social counter-revolution.

On January 15, over 5,000 people demonstrated in Burgos calling for the release of all those arrested and an end to the Boulevard Project. Simultaneously in 48 other Spanish cities and towns, smaller protests were held, including Madrid, Ciudad Real, Logroño, Oviedo, Seville, Valladolid and Gijón.

In Madrid around 1,000 people gathered in central Puerta del Sol square chanting, “We are all Gamonal!” and “Freedom for prisoners in jail for fighting!”

The demonstrations were organized through the social networks like Facebook and Twitter. When some protestors went to the ruling Popular Party’s (PP) Madrid headquarters the police charged, attacking them and arresting 14, including three minors.

While the media has portrayed the disturbances as a petty conflict over a construction project and the violence as a product of “professional agitators”, underlying the conflict are explosive social conditions that are common throughout Spain. These are the result of five years of austerity policies spearheaded by the previous Socialist Party (PSOE) government and the current ruling PP, the economic crisis and catastrophic levels of unemployment.

The unrest in Burgos is a preview of what is to come in the next period under explosive social conditions of mass unemployment of 27 percent—56 percent amongst youth—poverty levels affecting 20 percent of the population, staggering levels of inequality and precarious jobs and salaries.

At the same time, the council of this city with a 135 million euro debt is slashing social expenditure. They are currently closing a nursery in Gamonal because the council argues that they do not have 13,000 euros for repairs.

The Boulevard project is another example of the close link between the construction companies and the ruling parties, which has been revealed in countless corruption cases in the last decade.

The main beneficiary of the project will be the construction firm BMG Engineering and Architecture of Antonio Miguel Méndez Pozo, known as “the boss”, who also happens to own the daily newspaper Diario de Burgos. Pozo was sentenced in 1992 to seven years in prison for falsifying documents in a construction fraud case, of which he served just nine months.

The PP mayor of Burgos, Javier Lacalle, was involved in a controversy in 2006, having made a trip led by Pozo’s son to the French Riviera with all expenses paid by several construction magnates. Lacalle has now announced that the Boulevard project will be temporarily suspended for 15 days, arguing that city officials cannot guarantee the safety of the workers and demonstrators.