“The government, courts and police are all stacked against us”—spokesman for victimized Maruti Suzuki India workers

The World Socialist Web Site recently interviewed Mahabir Dhimn, a worker who has been in the leadership of the bitter and explosive struggle that workers at Maruti Suzuki India’s Manesar, Haryana car assembly plant have mounted against the car-maker’s brutal cheap-labour work-regime.

With the full support of the Congress Party-led Haryana State government, Maruti Suzuki (MSI) has sought to smash the Maruti Suzuki Workers Union (MSWU), the independent union the Manesar workers formed in 2011 in opposition to a government-recognized, company-supported stooge union and which led a series of strikes and occupations in the summer and fall of that year.

For the past 18 months, 148 of the MSWU’s most militant members, including the entire MSWU leadership, have been in jail on frame-up charges including murder and rioting. The charges arise from a company provoked altercation on July 18, 2012 in which Awanish Kumar Dev, the only Maruti Suzuki manager who showed any sympathy for the workers, was killed. Many of the jailed workers were not even on the premises at the time of the altercation. In late July and early August 2012, the police carried out mass arrests using lists of worker militants supplied by management. Once in detention, the workers were subjected to torture, including limb-stretching and immersion in water for prolonged periods

The company also used the July 18, 2012 altercation as the pretext to conduct a wider purge of its workforce, firing 546 permanent workers and 1,800 contract employees. 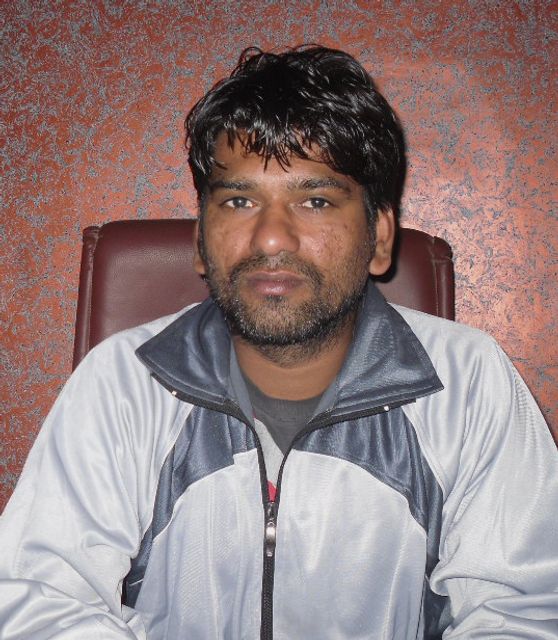 Now 29 years-old, Mahabir Dhim was hired by Maruti Suzuki as a trainee in 2006, the same year the Manesar plant opened. He is a member of the MSWU Provisional Committee. It was established to lead the fight against the state-company assault under conditions where the MSWU’s entire elected leadership is incarcerated. WSWS: What was the background to the July 18, 2012 incident?

Mahabir: It was a pre-planned company-provoked incident to break up our union. Human Resources Manager Awanash Dev helped to register the MSWU with the Haryana Labor Department in March 2012. The management was furious about it and determined to break up the union at any cost. There were several such attempts prior to July 18, 2012.

The management spread rumors that the MSWU leadership got money from the management and that’s why workers were not getting anything and that the union was not concerned about the interests of workers. They also tried to bribe the union leaders.

With the motive of provoking workers, a lizard was once put in the tea provided to workers. In general the company was maintained clean. Therefore workers saw this as a deliberate act.

On July 18 at 7:15 PM the incident happened. A supervisor used casteist abuse against a worker, Jialal and after he protested, Jialal was suspended and the supervisor was sent home on holiday. All workers demanded immediate revocation of the suspension order and disciplinary action against the concerned supervisor.

Unusually a 200-strong police battalion had been deployed inside the plant that day. We also saw bouncers in Maruti Suzuki worker uniforms. When asked who they were, they said “we are new joiners, transferred from MSI’s Gurgaon plant.

A few days after the July 18 incident the wife of Awanish Dev told the NDTV that she didn’t believe that the workers were involved in the death of her husband. She also spoke about a longstanding dispute between him and MSI management. However, that interview has disappeared from NDTV archives.

WSWS: Can you describe the current situation of the jailed Maruti Suzuki workers?

Mahabir: The current situation is pretty bad. Initially in 2012 when they were put in jail the police subjected them to torture. There has been no torture recently. However, the administration tortures the workers mentally by keeping them in jail and not allowing them out even for a short time on important family issues such as the funeral of a close relative. If someone gets sick, proper medical care is not given and it is extremely rare to get short-term bail even for medical treatment. A few months ago, a worker got tuberculosis in jail and was bailed out for six months for treatment. These six months are close to over and he will be put in jail again.

WSWS: What are the conditions in the Manesar plant since the purge of the workforce in August-September 2012?

Mahabir: Since then the workload has been almost doubled. Although the Manesar plant has stopped hiring contract labor it now has a casual labor system. The company recruited nearly 1,000 workers from outside Haryana state as casual employees for a seven month period. After seven months they were laid off and a new batch of casual workers was recruited and this keeps going on.

The repression in the plant is severe. There is a 24-hour police presence in the factory with the deployment of 200 police personnel on three shifts each day. In addition to that there are 200 armed PSOs (Personal Security Officers), who are supposed to be providing security to managers. There is also a company security force without firearms, but with batons. The workers are kept intimidated and told not to raise their voice or they will be put in jail and dismissed. Their family members have also been threatened by the police.

The company also uses spies to watch on workers. These spies or vigilant officers even watch out for MSI workers joining protests outside the plant.

WSWS: Is the MSWU functioning inside the plant now?

Mahabir: The union is functioning only outside of the plant, not inside. Eleven active members of the union were transferred to MSI’s outlets in other states, including even Tamil Nadu in southern India, so as to intimidate the workforce.

WSWS: What led you to form the MSEU and later the MSWU?

Mahabir: Our chief demands were the abolition of the contract labor system, wage hikes and better working conditions. In 2011 we formed the Maruti Suzuki Employees Union (MSEU) for fighting for those demands and filed an application for its registration with the Haryana Labor Department. However the labor department refused to register our union saying there already existed a union, the Maruti Udayog Kamghar Union (MUKU) [a company-stooge union].

Later the management gave a few hundred thousand rupees to the office bearers of the MSEU and they were forced to resign. Then the union was disbanded. That is why the workers had to register a new union, the Maruti Suzuki Workers Union (MSWU).

WSWS: What do you think about the attitude of the major labor federations like the Center of Indian Trade Unions (CITU) and the All India Trade Union Congress (AITUC) to the Maruti Suzuki workers’ struggle? [The CITU and AITUC are the union affiliates of the two main Stalinist parliamentary parties, respectively the Communist Party of India (Marxist) or CPM and the Communist Party of India (CPI).]

Mahabir: The CITU and AITUC have huge branches in Haryana, including in the nearby cities of Gurgaon and Kaithal. But so far, apart from empty promises of support they have not helped either by financial support or with manpower. They have raised demands regarding inflation and so on, but not raised any demands for the victimized Maruti Suzuki workers at all. A local chapter of CITU in Kaithal once led some small rally where one of the demands was to free the Maruti Suzuki workers but that was it, no financial or manpower support.

The central unions don’t take strong steps. For example they organized in February last year a two-day general strike. But workers could not win their rights, because the leadership coming from the CPM and the central unions is so weak

Workers have lost confidence in these unions. It was because of this new independent unions have emerged at the Manesar plant as well as in many other companies in this region. The positive thing is there are now youngsters in the leadership of the newly emerged unions. They want to do something good for the workers. Their thoughts are more towards revolutionary struggle. They want to fight rather than bend down before the management. There is a determination. However the negative thing is the membership of the newly formed independent unions are not huge.

WSWS: In you struggle you have come up against the entire capitalist political establishment, including the Congress government, police, courts and the corporate media. How do you see your struggle proceeding in opposition to these political forces?

Mahabir: It is true they are all stacked against us. None of the courts, police and government are sympathetic to the workers’ cause. All are biased towards the capitalists. The government is actually paying the fees for the company lawyers to fight the workers. This is a huge amount, around 150,000 rupees ($2600) per day. There is not much political power the workers have, except for unity.

We are doing our best to mobilize support from other workers. Also, we go out to the villages to rally support for our cause. Our target is to bring all independent unions under one roof. Only when we have the strength we will be able to fight for our rights.

We will not stop our struggle until all our fellow workers are freed and the sacked workers have been given back their jobs. We have a number of actions planned including protests in different Indian cities and a march to Delhi to demand the [Congress Party-led] central government intervene.

WSWS: Do you really believe that by appealing to the very forces—the state and Union Congress Party governments, the Labour department etc.—that have openly sided and worked hand-in-glove with Maruti Suzuki management, the workers’ rights can be won?

Mahabir: Workers don’t have political power. They are aware of that fact. The only power they have is their unity. They have to keep on fighting until they get justice. The workers currently working at the Manesar plant also support the cause of the victimized workers. Despite police and management intimidation they are trying to help us in every possible way.