The philosophical and political foundations of historical falsification

IYSSE meeting at the Humboldt University in Berlin

By our correspondents
12 February 2014

Around one hundred people attended a meeting of the International Youth and Students for Social Equality (IYSSE) at Humboldt University (HU) in Berlin last Saturday. The meeting focused on the philosophical and political foundations of historical falsification.

The occasion for the meeting was an invitation by Jörg Baberowski, a professor on the faculty of Eastern European history at Humboldt University, to Robert Service. The British historian is to speak today at a colloquium on the topic “Trotsky: Problems of a Biography.”

Sven Heymanns from the IYSSE chapter at HU concentrated on the significance of the invitation in his introduction. “As an historian, Service has been totally discredited since his biography of Leon Trotsky was condemned by the academic world as completely unscientific,” he said. “And now Service, who has never challenged the charges made against his book, is to speak within the framework of a scientific colloquium at Humboldt University.”

“It would not only be a grave intellectual mistake to ignore this invitation, but also a political and even moral one,” Heymanns continued. “A lie cannot be simply ignored, as if it were something harmless. And it certainly can’t be ignored when it concerns fundamental historical questions of the 20th century.” 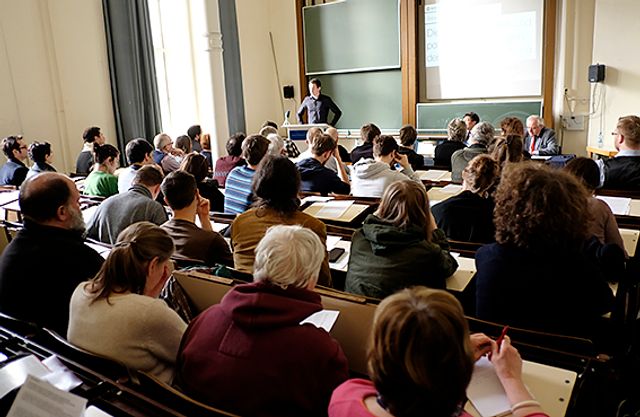 “Lies about politics and history have wide-ranging implications,” Heymanns warned. He recalled the outbreak of the First World War 100 years ago and the Second World War 75 years ago. Today, the major powers are heading towards a new war, and the capitalist system has, for the last five-and-a-half years, been in its worst crisis since the 1930s.

Millions of young people, in particular, are searching for a way out, for a new perspective, not least via the alternative put forward by Leon Trotsky, he said. “In this situation, the book Robert Service has been promoted to write, as has been proven, aims to utterly discredit Trotsky and his ideas, regardless of the cost to the author’s reputation.”

He was saying this not only as a Trotskyist, but as a student of history, Heymanns explained. One could have differing opinions on the work of Trotsky. “But one has to approach the object of investigation with the required seriousness and care, and with a scientific method. The tools of the historian are access to the archives and the evaluation of sources, but not falsifications, lies and the juggling of anti-Semitic stereotypes.”

That someone like Service, who deals in falsifications and calumnies, had been invited to a renowned university such as HU raised troubling questions, Heymanns concluded. “Students at this university are not only confronted by budget cuts, but also by an intellectual offensive. Its aim is to block the way to a scientific engagement with the fundamental questions of the 20th century, which alone can provide the key to understanding the current situation.”

In his contribution, Wolfgang Weber, a member of the executive of the Socialist Equality Party (Partei für Soziale Gleichheit--PSG), detailed the background to Robert Service’s invitation.

Those who anticipated a new flowering of historical science after the collapse of the Soviet Union and the opening up of the archives, which would clarify the Stalinist lies about Leon Trotsky, have been disappointed, he said. As early as 1992, a biography of Trotsky appeared in Russia by the veteran Stalinist and military historian Dmitri Volkoganov that reinforced the old lies. Ten years later, three British historians, Ian Thatcher, Geoffrey Swain and Robert Service, published their own biographies of Trotsky within a short period.

David North, chairman of the World Socialist Web Site, undertook a fundamental critique of all three books, characterising them as “preventative biographies” that had resuscitated old lies. In this process, Service stood out for his unscrupulousness, as Weber illustrated with numerous examples.

North’s reviews of all three biographies appeared as a book, In Defence of Leon Trotsky, published in 2010. Service thought at first he could ignore the criticism, Weber said. But then developments occurred that he had not expected.

The oldest and most prestigious historical journal, the American Historical Review, gave Bertrand Patenaude from Stanford University the task of producing a review of both North’s and Service’s books. For Service, the result was devastating.

Patenaude confirmed North’s critique in full and came to the conclusion: “North calls Service’s biography a ‘piece of hackwork.’ Strong words, but entirely justified. Harvard University Press has placed its imprimatur upon a book that fails to meet the basic standards of historical scholarship.”

Then, in Europe, fourteen historians signed a letter addressed to the Suhrkamp publishing house advising strongly against the publication of a German edition of Service’s hackwork.

“Each of these historians has his own personal political views, which are more or less distant from Leon Trotsky’s,” Weber explained. “But on one thing they were all agreed. Historical truth had to be defended as a basic principle of scientific research, independently of all political differences. Here there can be no compromise or ambiguity. The history of Germany and national socialism illustrates this precisely: it begins with lies and ends with mass murder and barbarism.”

Suhrkamp halted publication of the book, which was almost ready, and delayed its printing for one year, Weber stated. But after a year of silence and internal disputes, it published the book in July 2012, practically unaltered, with all of its mistakes, falsifications and calumnies.

Prior to this, a total of 25 reviews in daily newspapers, on radio programmes and on internet blogs appeared in German-speaking countries. The reviews were overwhelmingly scathing of Service. Exceptions were the comments published by Ulrich Schmid in the Neue Zürcher Zeitung, Lorenz Jäger in the Frankfurter Allgemeine Zeitung, and Stefan Scheil in the extreme right-wing Junge Freiheit. For political reasons, they encouraged Suhrkamp to publish the book.

Then, in the summer of 2013, Professor Jörg Baberowski met with Robert Service at a workshop at the Hoover Institution at Stanford University. This institute was founded shortly after the October Revolution as a well-equipped think tank for anti-communist ideology, politics and strategy. Among its fellows were infamous right-wing politicians such as Ronald Reagan and Margaret Thatcher. It was there, Weber suggested, that Service’s invitation was agreed. 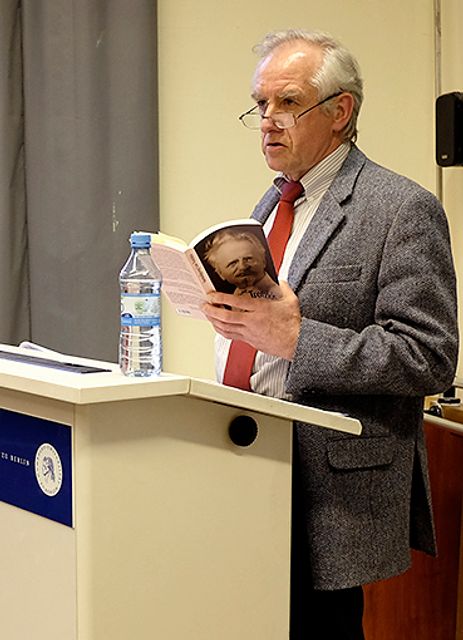 As the final speaker, Ulrich Rippert, chairman of the PSG, focused on the political context of Service’s invitation. The announcement by the new federal government that the period when Germany was obliged to abstain from military action was finally over marked an historical turning point, Rippert declared. It prepared the way for a new stage of imperialist and aggressive foreign policy.

“The struggle against social inequality, dictatorship and war necessarily raises the question of a socialist program, and Trotsky’s perspective, which made clear the unbridgeable conflict between Stalinism and socialism, plays a central role,” Rippert said. “Service’s diatribe is an attempt to poison the well and suppress the growing interest in Trotsky’s writings. They would prefer to burn the writings of Trotsky and all of the Marxists, just as they did in May 1933 in the book burning ceremony carried out here in the square across the road from the HU.”

Rippert then spoke about his own personal experiences. He had been confronted by the crimes of National Socialism at a trade union school as a 16-year-old apprentice and had been shocked. He rapidly grasped the connection between fascism and capitalism. But this raised another question: Why did the working class not prevent this catastrophe?

“So we studied the workers movement somewhat more closely,” he said. He had opposed Stalinism, which suppressed the workers’ uprising in East Germany in 1953, the Hungarian revolution of 1956, and the Prague Spring of 1969. But only the writings of Trotsky brought clarity.

“We studied Revolution Betrayed, and feverishly studied Trotsky’s writings on Germany when they were published in the summer of 1971. The situation in Germany now became clearly comprehensible. Due to the reactionary politics of the Stalinist parties, the working class had been unable to prevent fascism.”

Rippert ended with a call to all of the students and youth present: “Some of you have surely seen the film Generation War. Now you are being addressed. You are the future fathers and mothers who will answer the questions of the coming generation, and you must ask yourselves: What did you do when everything began again, when right-wing ideologues were invited into the universities to spread lies and historical falsifications?”

A lively debate followed the main contributions and continued in the hallway long after the end of the meeting. Not a single member of the audience sought to defend Service or Baberowski. The discussion included a vigorous and illuminating debate about how various schools of postmodernist and poststructuralist forms of thought, which deny the existence of objective historical truth, had prepared the way for the distortions contained in Service’s biography.

The Post-Soviet School of Historical Falsification