Striking University of Illinois at Chicago faculty and students speak out

Striking faculty members at the University of Illinois at Chicago expressed their determination to fight for improved wages, benefits and working conditions on the second day of their two-day strike Wednesday. More than 1,150 full-time tenured and non-tenured instructors walked out in the first faculty strike in the university’s history after the board of trustees refused to budge over a year and a half of negotiations for their first contract.

Many non-tenured faculty make as little as $30,000 a year in one of the most expensive cities in the US. They also have no more than one-year contracts. The United Faculty union, which gained recognition in 2012, is reportedly asking for the minimum salary to be raised to $45,000 for non-tenure track faculty, with a path to promotion, and that tenured faculty earn at least $60,000 a year.

The two sides are at odds on how to structure future pay adjustments and levels for minimum salaries. The university has offered a minimum salary of up to $36,000 by 2016.

The university has been in the black by the hundreds of millions of dollars and has increased the number of upper-level administrators by 10 percent in recent years, yet the lowest-paid instructors are increasingly relied upon to teach a significant portion of undergraduate courses.

Hundreds of classes were canceled in the two-day strike, which has won widespread sympathy from students, some of whom joined the faculty picket lines on Wednesday.

In a written statement, UIC officials said the union’s proposals—including raises, increases to minimum salaries and payment of employee out-of-pocket insurance costs—would increase total costs by an estimated 23 percent for tenured faculty and 27 percent for non-tenured faculty. UIC officials have also said its minimum salaries for lecturers are “competitive” with those of lecturers at other institutions.

According to the latest public contract proposal, from last week, the union wants a merit salary increase of 4.5 percent this year. The administration has offered a 3.25 percent increase. The strike does not affect classes taught by graduate student instructors because their contract has a no-strike clause.

The WSWS spoke with a number of professors and students picketing on Wednesday.

Jon Jarrett, professor of philosophy, spoke frankly about Illinois Board of Trustee’s intransigence: “Unless and until the board sees the light, there may have to be a full strike. Circumstances can’t continue this way.”

Many undergraduate students were picketing in support of faculty on the East Quad.

Mitchell, an anthropology student, said, “I want to see the faculty get what they deserve. They shape future generations.” Alex, who is preparing to go to law school, said she’s picketing because “[i]t’s not fair that people at different schools get paid differently to teach essentially the same things.”

Erika, a sociology student, said, “We have grad students teaching all the classes. I’ve had my grad student [instructors] say to me, ‘I shouldn’t be teaching this class, you should have a faculty member, it’s what you’re paying for.’ The faculty have 250 students and two teaching assistants. It’s too much work.”

Lux, an anthropology student, added, “UIC is such a great community, it’s so diverse. The professors want to teach here, they really care about the students and they want to be in the classroom and not on the picket lines.

“Institutionally, students feel powerless, and the university is making it difficult to get more information. The email they sent out made it sound like the teachers wouldn’t negotiate, but they've been through 67 negotiation sessions.” 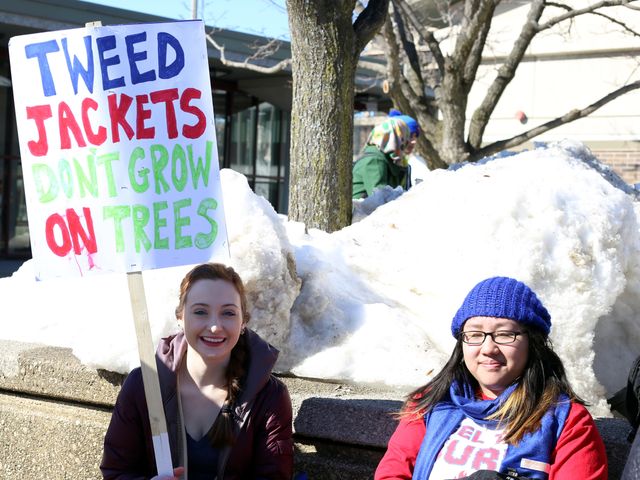 Anna, an anthropology professor, said, “The university is not bargaining in good faith. For me, it’s responsible for creating the conditions that students deserve.”

All of the teachers who spoke with WSWS emphasized that the strike is a long time coming and that it should have come sooner. Some spoke of their preparedness for an indefinite strike if the university administration does not present acceptable minimum pay and benefits.

Supporters of the Socialist Equality Party distributed copies of the WSWS article on the strike that raised the necessity for taking the struggle out of the hands of the trade unions, including the American Federation of Teachers (the parent organization of United Faculty), and to develop a political counter-offensive by the working class against the attack on public education being spearheaded by the Obama administration.