We are publishing here the second part of a three-part review of a historical study by Ulrich Herbeck on the history of anti-Semitism in Russia from the Tsarist empire until the end of the Civil War in 1922. The first part was posted April 29.

The struggle against “Jewish Bolsheviks” and the pogroms of the Whites

However, the provisional government under the leadership of Alexander Kerensky, which came to power in February, refused to undertake any fundamental changes in the interests of workers and farmers. It continued the war and defended the foundations of capitalism in Russia. This was also reflected in its policy toward the anti-Semitic far right.

A government commission that was to have taken action against anti-Semitism committed itself to doing so only within the framework of the Tsarist laws—precisely those laws which had given the pogroms of the past a pseudo-legal cover. The judiciary continued to be staffed by politicians close to the right-wing Union of Russian People (SRN). As a result, the prosecution of former SRN leader Alexander Dubrovin (1855-1921) failed.

As with the expansion of democratic rights to the Jews after the French Revolution, the political emancipation of the Jews in Russia in 1917 became a target of counterrevolutionary circles. In the ensuing Civil War, anti-Semitic agitation played a key role in the struggle of the Whites against the Bolsheviks.

Even prior to this, after the failed July uprising of 1917, the rumours spread by anti-revolutionary groups of “German money for the Bolsheviks” often had an anti-Semitic undertone, alluding to an international Jewish conspiracy against Russia. The “revelation” of alleged secret financing was often connected with an “exposure” of the pseudonyms of Jewish revolutionaries. 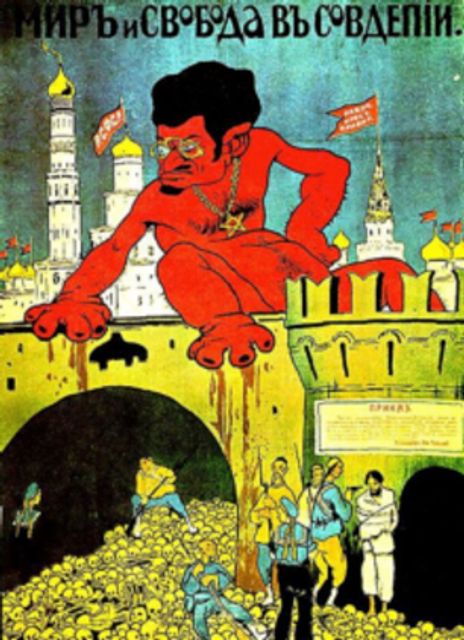 An anti-Semitic caricature of Trotsky which portrays the revolutionary as the Devil. This poster was published by the White Army in 1919.

The hostile image of the “Jewish Bolsheviks” emerged as central to counterrevolutionary agitation after 1917. Herbeck explains that the counterrevolutionaries were “fascinated by the pseudonyms of the revolutionaries,” since now one could speculate about a Jewish revolutionary behind every Russian name. “All of the anti-Semitic prejudices about Jewish cunning, deviousness or the instrumental relation to truth, etc., could be confirmed by the Russian pseudonyms,” he notes [1]. The revolution could thus be portrayed as the work of “foreign” forces, making Chinese, Latvians and Armenians responsible, along with the Jews.

For example, a leaflet distributed in the army of the Tsarist General Yudenich stated: “Who leads and guides Russia’s affairs? It is embarrassing and shameful to state it: Mr. Trotsky (in reality, Leib Movsevich Bronstein), Mr. Zinov’ev (in reality, Srul’ Morduchaevich Apfel’baum), Mr. Steklov (in reality, Moska Merkovich Nakhamkis) and all of the same kind […] The bloodthirsty Jewish rulers, the Bronsteins and Apfel’baums, give you, the long-suffering Russian people, no peace, no quiet life, and no cheap goods […]” [2]. 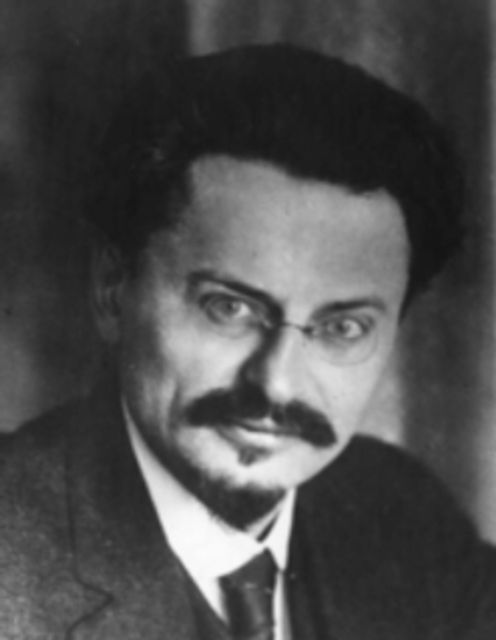 From the outset, the anti-Semitism focused on Leon Trotsky, who, along with Lenin, was the most important leader of the revolution and was identified more than any other with the programme of international socialist revolution. “The aggressors in almost every pogrom repeated ‘you’re getting this for Trotsky’. There was almost no anti-Semitic declaration without reference to Trotsky” [3].

This anti-communist anti-Semitism also played a key role in the counterrevolutionary propaganda of the extreme right in Western Europe and the United States. In addition, throughout the civil war, the imperialist powers armed the white armies in their struggle against the Bolsheviks, even as the Whites carried out mass killings of Jews.

The most important site of anti-Jewish massacres between 1918 and 1920 was Ukraine, where “the greatest modern mass murder of Jews” prior to the Holocaust took place [4]. A large proportion of Russia’s Jewish population, 1.5 million out of a total 2.5 million, lived in Ukraine after the First World War (Belarus, Poland and Galicia, with their large Jewish populations, were not part of Russia at that time).

Anti-Semitic prejudices had been widespread among the rural Ukrainian population for centuries. Due to their social position, the Jews were often seen by farmers as usurers who exploited them. Additionally, the city population was composed overwhelmingly of Russians, Germans and Jews, in contrast to the rural population, which was made up of Ukrainians. Thus, rural anti-Semitism also reflected the contradictions between town and country.

Ukrainian nationalists, as well as the Whites, based themselves on this hostility towards Jews in rural areas to mobilise peasants against the “Jewish” Bolsheviks. 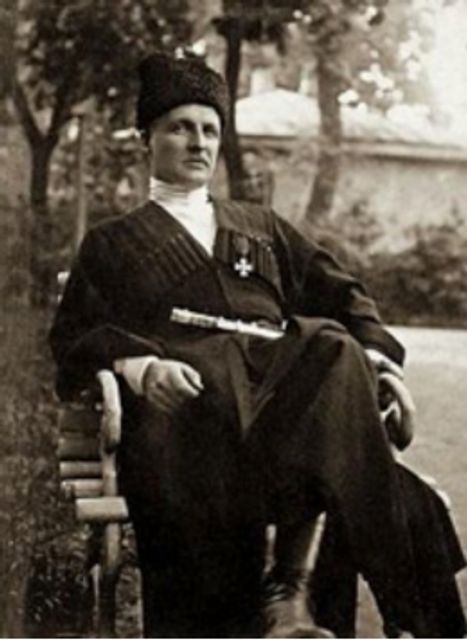 In the wake of the Brest-Litovsk Peace in March 1918, under which the young Soviet government had to give up Ukraine, Poland and the Baltic states to the imperialist powers, the Germans brought the former Tsarist general Pavlo Skoropadsky to power in a military coup in April. He brutally pursued supporters of the Bolsheviks.

“Under his government, Kiev was a meeting point for right-wing radicals and anti-Semitic politicians and military forces from throughout Russia,” notes Herbeck [5]. Right-wing extremist monarchists could count on financial and political support from the German military and government.

After the overthrow of the German-installed government, many of its members went into exile in Germany. Several of them, including Skoropadsky himself, took part two decades later in the Nazi war of annihilation against the Soviet Union and the Jews of Eastern Europe.

Herbeck writes that the pogroms declined slightly for a time under Skoropadsky. The main reason for this was the fear of the German occupying troops that an outbreak of violent conflict within the population could quickly turn against them. At the same time, the occupation forces and their puppet government actively encouraged anti-Semitism in the occupied areas [6]. 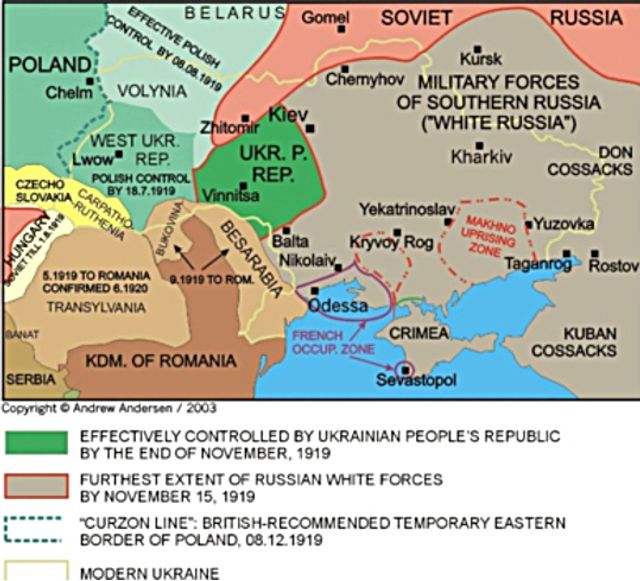 A map of the Ukraine during the Civil War in 1919

In the Directorate’s sphere of influence, Ukrainian nationalists carried out a number of pogroms. For instance, on 15 February 1919, at least 1,200 Jews were killed at Proskurov. A further 560 were murdered in the surrounding towns. The pretext for the massacres was pro-Soviet uprisings that were blamed on the Jews by the Ukrainian nationalists.

The pogroms also continued after Symon Petliura [8], the head of Ukraine’s national army and a member of the Directorate, aligned with Poland in April 1920.

But by far the most horrific anti-Jewish pogroms, on a “genocidal scale,” were carried out by the Volunteer Army under General Denikin between the summer of 1919 and the beginning of 1920. After their advance on Moscow was blocked by the Red Army in 1918, Denikin’s army was compelled to withdraw to the south, where they controlled the important Ukrainian cities of Kiev and Kharkov for a time.

During their march through Ukraine, the army carried out organised looting, rape and massacres of civilians. However, it was the Jewish population that was by far the worst affected. In the anti-Semitic pogroms, which were planned and implemented like military operations, there were “mass rapes, sadistic torture and seemingly pointless killings” [9]. The Whites hanged, shot or stabbed their victims. Many were buried alive, others tortured to death. Thousands more died of hunger, illness or the cold. In the six months from the summer of 1919 to the beginning of 1920 alone, an estimated 50,000 Jews were murdered by the Whites. 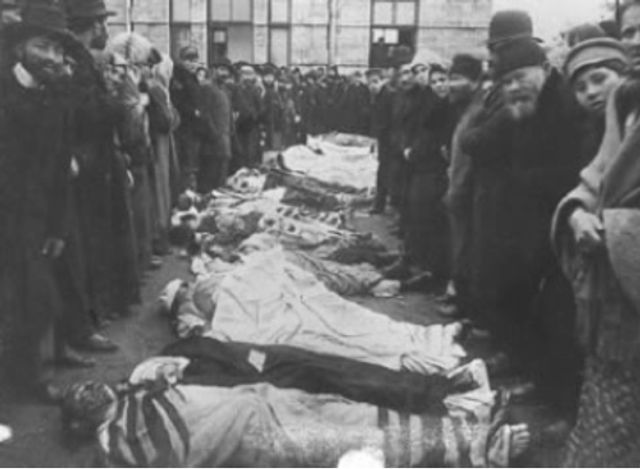 Victims of a pogrom in Odessa

There were bloody pogroms in other parts of Russia as well. The army under the control of Baron Roman von Ungern Sternberg, also known as the “bloody Baron,” murdered the entire Jewish population of Ulan Batur (today part of Mongolia) during its retreat in 1921.

This bloodbath was supported with virtual silence from the imperialist powers as well as the Russian liberals, right-Social Revolutionaries and sections of the Mensheviks. As during tsarist rule, the church played an important role in the spreading of vicious anti-Semitic propaganda. 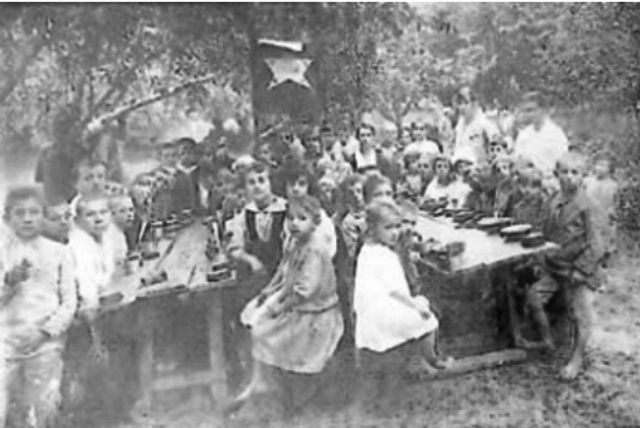 Orphan children who lost their parents to pogroms. An orphanage in Kovchitsky in Belarus.

Exact figures for the number of victims in the pogroms are virtually impossible to obtain. The massacres were so comprehensive that whole families were murdered and Jewish communities practically erased from the map. In general, estimates suggest around 200,000 victims. According to the Russian historian Budnitskii, a further 200,000 Jews were seriously wounded in pogroms. Thousands of women were raped [10]. When one counts the dead, the wounded, women who were raped and orphaned children, the figure of the pogrom victims comes to around 1 million [11].

Only the victory of the Bolsheviks in the civil war in 1922 brought this massacre of the Jewish population to an end.

8. Symon Vasylyovych Petliura (1879-1926) was a Ukrainian nationalist who led the struggle for Ukrainian national independence from the Soviet government in Petrograd in 1918-1920 and against the White Army. In 1920, he concluded a treaty with Pilsudski’s Poland to forge a military alliance against Soviet Russia. However, in October 1920, Poland was forced to sign an armistice with the Soviet government. In late November, the Red Army defeated the Ukrainian military of Petliura.