The blizzard of January 26-27 and the storm that followed on February 2—leaving up to 18 additional inches of snow in the Boston area—have laid bare the effects of years of inadequate budgets on Massachusetts’ public transportation system. An additional two feet of snow forecast by Tuesday morning threatens to further cripple the aging transit system. 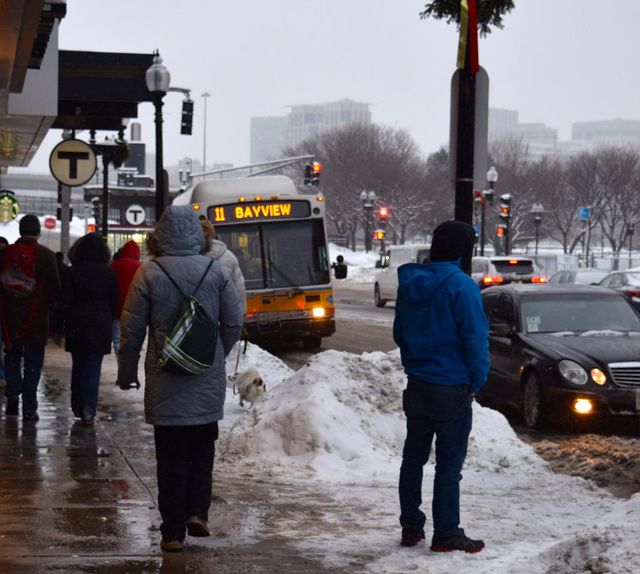 Broadway Station in South Boston: 40 percent of the MBTA’s newest Red Line cars are more than 20 years old, and 121 of the system’s diesel buses are operating at the end of useful life.

Governor Charlie Baker announced on January 26, before the first storm even began, that the MBTA would cancel all service—subways, buses, heavy rail commuter trains, and ferries—starting at midnight and lasting through Tuesday.

Disasters and delays have followed the resumption of service on January 27. That Thursday morning, two days after the storm, a Red Line subway car with a malfunctioning motor and doors filled with smoke in Quincy Center.

After passengers in the car screamed for help, some on the platform kicked out windows and rescued people. One of the rescuers told the Boston Globe, “Eventually, there was so much smoke it was becoming hard to breathe.”

A 65-year-old passenger said , “It was frightening … almost all the lights were off, and everyone was looking at our car and I thought there was a fire under it, and I could not get out.’”

Incredibly, though, MBTA spokesman Joe Pesaturo said of the rescuers that “it’s unclear why some acted in such a manner” in what was “not an emergency situation.”

The disabled train caused subsequent delays all up and down the Red Line, which has a weekday ridership of nearly 275,000 people and serves Harvard, MIT, much of Boston’s financial district, and the commuter rail hub at South Station.

MBTA General Manager Beverly Scott responded to Quincy Center and subsequent events with platitudes, first claiming in a written statement that “it was never the MBTA’s intention to question what the customers were feeling” and then telling the Boston Herald in a phone call that “it breaks my heart.” While she was on the phone, Green Line service between Kenmore Square and Haymarket was suspended because of a broken rail. This on a stretch of track that is completely underground and shielded from the worst of the weather.

On the morning of February 3, after the second storm had ended, commuters awoke to advice from the MBTA that they should avoid the Red Line altogether: “Due to a shortage of fully functioning subway cars, customers are asked to consider an alternative to the Red Line today.” This warning was broadcast on the agency’s web site and local radio stations. Packed subway platforms have suffered through announcements of “severe delays.”

As of Saturday, February 7, five days after the second storm, above-ground stretches of the Orange and Red Lines remained closed, with train service replaced by buses. Snowdrifts remain on some outdoor platforms.

Cancelled trains on commuter rail lines, which carry almost 130,000 passengers per day between Boston and its suburbs, have also delayed commutes for hours. There have been complaints of delays that were not even announced until after the train was already late.

People who work less than 10 miles from their homes have experienced evening commutes of two hours or more. Those who chose to drive to avoid the public transportation disaster have suffered equally long delays.

The back-to-back storms—which left a record amount of snow in eastern Massachusetts for a one-week period—have been accompanied by bitter cold. While weather conditions are difficult, decades of inadequate funding for public transportation have exacerbated and exposed the crisis.

Of the 218 Red Line subway cars currently in service, 74 date to 1968 or 1969. While these were rebuilt 30 years ago, they still run on direct current (DC) propulsion motors, which are more vulnerable to snow because of their venting. The newest Red Line cars, approximately 40

percent of the fleet, are already more than 20 years old. All 120 existing Orange Line cars were put into use between 1979 and 1981. Nearly half of Green Line trains date from 1988 or before, including ten that were put into service in 1946.

The 1,071 buses in the system are not as old but have shorter life expectancies, in the range of 12 years. The MBTA itself has reported that 121 of the diesel buses still in use are at the end of their useful life. The Boston Globe reports that many of the subway problems of the last two weeks could be mitigated by the use of alternating current propulsion motors—as opposed to the older DC technology—and newer methods of heating outdoor rail switches. Furthermore, writes the paper, this issue is one “that other cities solved years ago using modern technology.” DC motors for rail vehicles were favored up until the 1980s, in part because direct current is required for electrified third rails. However, AC propulsion systems are now available for subway cars and are both simpler and more snow resistant than the older technology. According to The Globe, repairing an old DC motor costs on average $9,000 while replacing one costs between $35,000 and $90,000.

The MBTA’s maintenance budget has been underfunded for years, with the backlog estimated at $3 billion and growing in 2009. The agency’s 2015-2019 Capital Investment Program, the most recent available, promises to spend nearly $3 billion between the current fiscal year and FY19, but so far those promises have been mainly on paper. 342 new subway cars have been ordered, but delivery will not begin until 2018, and they won’t be fully deployed until 2023.

Approximately $2.4 billion of these expenditures will be funded by federal grants with the remainder raised through bonds. Large employers, including State Street Bank, Fidelity, and General Electric, will not have to worry about increased taxes. For the last six months of 2014, corporate and business taxes accounted for only 14 percent of total state revenues. Regressive sales and meals taxes contributed more.

The US Government Shutdown

The US Sequester Cuts

Social Breakdown – Violence in the US