WSWS International Editorial Board Chairman David North presented the German translation of his book, The Russian Revolution and the Unfinished Twentieth Century, at the Leipzig Book Fair last Friday. The lecture, attended by 450 people, was among the most successful meetings at the fair. 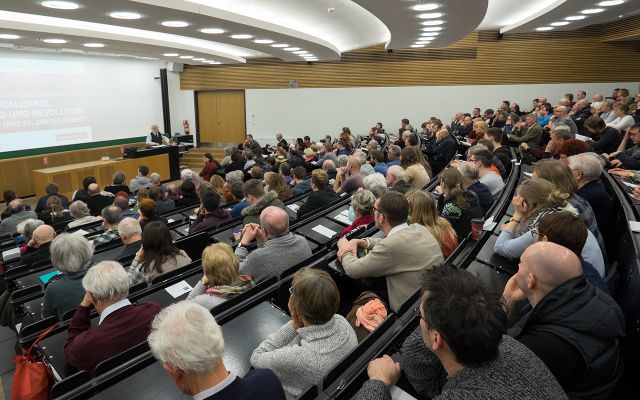 Many students from Leipzig University participated, along with workers and visitors to the book fair. The report was repeatedly interrupted with applause.

“This book is not only a significant contribution to the history of the twentieth century, it is part of that history,” said Christoph Vandreier, who introduced the meeting on behalf of publisher Mehring Verlag. The essays were not written out of academic interest alone, but rather as part of a sustained polemic against reactionary tendencies that emerged following the collapse of the Soviet Union.

“The book is the product of political struggles led by the International Committee of the Fourth International over the past 30 years,” Vandreier said. “David North played a prominent role in these struggles,” including as a leader of the Trotskyist movement in the United States and as chairman of the WSWS editorial board.

In his speech, North described the essays and lectures collected in the book as “a single, internally unified work, whose 15 chapters were written over a period of nearly 20 years, in response to historical, theoretical and political issues that arose in the aftermath of the collapse, between 1989 and 1991, of the East European Stalinist regimes and the dissolution of the Soviet Union.” (For the full report, see, “Socialism and historical truth.”)

There has been a deliberate campaign to falsify history and discredit the October Revolution, North explained. This was particularly clear in the work of the Berlin-based professor Jörg Baberowski, which, North said, exemplifies the link “between post-modernism, political reaction, and a cynical contempt for factual evidence and the most basic standards of scholarly integrity.”

The themes of the report were developed in the discussion following the lecture.

The reactionary developments of the past 25 years unavoidably pose the necessity for an alternative to capitalism, North said. The growing danger of world war and the horrendous levels of social inequality are provoking popular anger and opposition. When North attacked the war propaganda of the media, he was interrupted by applause from the audience.

The discussion of alternatives to capitalism raises fundamental historical questions. “How can one say that socialism is an alternative to capitalism without explaining the tragic fate of the Russian Revolution?” he asked. To understand this fate, it is necessary to study the struggle of the Left Opposition and the Trotskyist movement against Stalinism.

The ruling class is also conscious of the importance of history, North argued. Particularly since the financial collapse of 2008, the falsification of history has assumed hysterical forms. “When a German professor [Baberowski] says there is nothing to be learned from history, then he is saying that there is nothing to learn from 1914, nothing to learn from the Third Reich.” The connection between positions like those of Baberowski and the revival of German militarism is undeniable.

It is not only important for workers to understand the Russian Revolution of 1917, but also the counter-revolution in Germany in 1933. Fascism was not the result of an ingrained anti-Semitism rooted in the soul of the German people, but rather the reaction of the ruling class to the October Revolution. Daniel Goldhagen’s thesis of “Hitler’s willing executioners,” discussed in detail in North’s book, completely ignores the opposition to fascism among the working class. As a result, the extent of the betrayal by the Social Democratic Party (SPD) and the German Communist Party (KPD) is concealed, and any understanding of fascism made impossible, said North.

One person in the audience asked how an international working class party could be built today. North noted that the International Committee (IC) did not seek to build a movement simply by gathering together all those who are dissatisfied with the present state of affairs. Rather, it is necessary to unify the working class on the basis of an understanding of the central historical experiences of the twentieth century. “It can only work on the basis of clarity on great historical issues, such as the experiences with Stalinism, fascism and the national liberation movements,” said North.

“I can prove this with one word,” North continued: “Syriza.” Many people were angered by the IC’s analysis, long before the recent Greek elections, that Syriza did not represent an alternative and would break all of its promises. “Within three weeks, Syriza did precisely what we had said. We didn’t have a crystal ball, but we understand the character of such petty-bourgeois tendencies. The twentieth century is full of them.”

Syriza had praised German chancellor Angela Merkel and even Finance Minister Wolfgang Schäuble, but its leaders never appealed to the German workers. They never called for meetings in Germany. “They never declared: ‘We require your support. If we want to change Greece, you have to struggle against your government. The problems cannot be resolved in Greece.’ ” As North spoke these words, spontaneous applause broke out.

There was a reason why Syriza made no appeal to the German working class, North went on. Syriza defends capitalism and speaks for the top 10 percent of society, who merely desire a fairer distribution of income at the top.

A young participant raised the enormous risks involved in revolution and asked whether the IC had really excluded all other possibilities for an improvement of society: Was there not perhaps an alternative to revolution?

“No,” North replied firmly. The developments of the past twenty-five years prove that capitalism is once again heading towards dictatorship and war. “Revolutions are the means by which great problems are resolved,” he said. There is no alternative to the overthrow of the ruling class in a revolutionary mass movement.

For this, a conscious political leadership is required. North pointed to the experience in Egypt, where millions participated in revolutionary struggles, but a revolutionary leadership was absent, allowing the military to retain its power. “That’s why you should become active in building the Partei für Soziale Gleichheit in Germany and the Fourth International around the world,” North said. The education of the working class on the basis of historical events was of decisive significance. “Therefore you should use this book for your own political education and discuss it with others,” he added.

After the meeting, discussions continued for some time at the literature table and in the hallways. Many took the opportunity to have their copy of the book signed by the author. Dozens of participants left their contact information to be informed of readers’ groups and meetings organised by the International Youth and Students for Social Equality, which supported the meeting held by Mehring Verlag.

On Saturday, there was another half-hour presentation of the book as part of an academic book forum at the fair, with an audience of about 150.