In the past year, residents of Flint, Michigan, 60 miles north of Detroit, have been subjected to a deepening water crisis. In March 2014, the city’s unelected emergency manager severed Flint’s ties to the Detroit water system, and the city began drawing water from the heavily polluted Flint River that reportedly costs less. 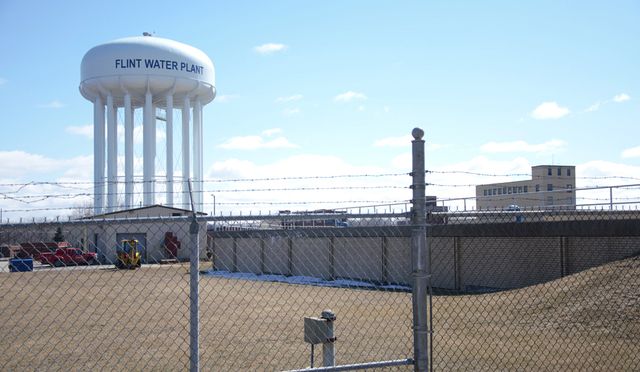 Water quality drastically deteriorated after the switch. Evidence of fecal coliform bacteria—also known as E.coli—was discovered in the water supply within the first five months. The city attempted to deal with the bacteria using chlorine, resulting in excessive amounts of trihalomethane (TTHM), a chemical known to cause liver, kidney and nerve damage, as well as increased rates of cancer.

Residents say that bathing in the water causes rashes and even using it to wash dishes and flush toilets is corroding their pipes. In fact, the water is so corrosive that General Motors—which has long economically dominated the city—disconnected from the Flint water system to draw from another system.

Flint, like nearby Detroit, is a historic center of the auto industry and has been devastated by deindustrialization and antidemocratic rule by emergency managers. The city is now under its fourth emergency manager, Jerry Ambrose, who has ruled out reconnecting to the Detroit Water and Sewerage Department pipeline that was built between the two cities when the auto industry was in its heyday.

City officials have instead partnered with the Karegnondi Water Authority on a pipeline project to tap directly into Lake Huron, one of the five Great Lakes. This project is not slated for completion until late 2016, leaving residents with a compromised water supply. 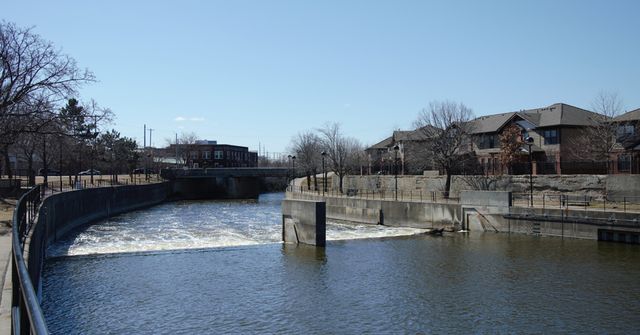 The Flint River, the source of the city's tainted water supply

Emergency manager Ambrose insists the water is safe to drink and that residents should simply ignore the “aesthetic” problems of the foul taste and smell and its corrosive effect on pipes and sinks. A report issued last week by the city’s water department declared that quality was improving and that residents had nothing to worry about—despite acknowledging in the same report that the city’s water supply remains above the state’s allowable annual level for TTHM.

A World Socialist Web Site reporting team found that Flint residents were overwhelmingly distrustful of the official statements and upset over the deplorable quality of the water and other basic social conditions. Residents responded strongly to the insistence of WSWS correspondents that safe drinking water was a social right, not a luxury to be given or taken away by the ruling class. 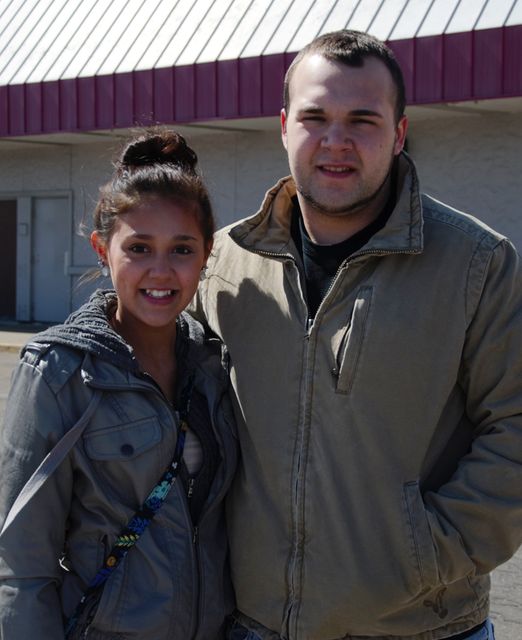 Atherton High School students Samantha and Joe said they couldn’t drink the water at their school. “We have to buy bottled water from the vending machines,” Samantha stated. “You can smell it in the water fountains, and see the cloudiness if you put it in a glass. The water is foggy and doesn’t taste right.

“They [the government officials] don’t care,” she added. “They don’t care about the people of Flint—all they care about are the rich.

“You see so many people on the streets, homeless or wandering,” noted Samantha. “There’s so much we could fix, but it doesn’t get fixed. The roads are terrible too. You have to swerve to avoid huge potholes. There’s stories of bus drivers crashing their school buses because they were trying to avoid those potholes.”

Sandra Wilson, 50, is a lifelong resident of Flint who is taking care of her 70-year-old mother. “Between me and my mom, we have spent about $200 over the past few months to buy cases of bottled water. I’m afraid to cook with the city water,” she explained. “It turns our pots and pans brown. We can’t drink it. 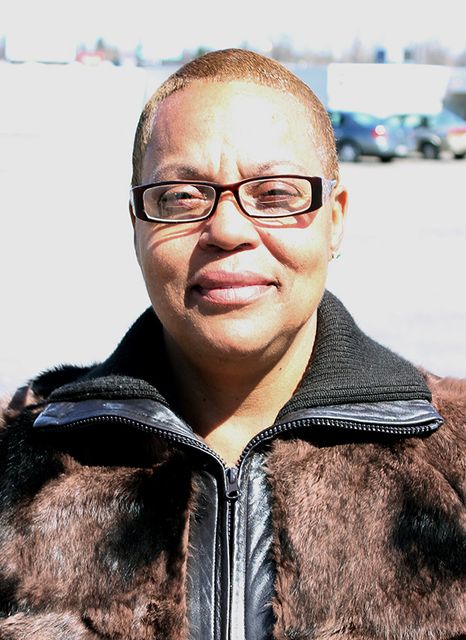 “The water bills are rising. I am trying to pay down a $355 water bill. We shouldn’t have to pay for it until it is safe to drink,” Sandra said. “Since they switched, they should give a steep discount.”

WSWS reporters asked Sandra how Flint has changed during her lifetime. “I can’t even drive down the street without wanting to cry. The city can’t even fix up all these boarded up houses. There are homeless people everywhere, and there are no programs to help them get back on their feet. They should be given places to live. There are no drug treatment programs.

“I think we should take all the money that the rich are spending on their yachts and spend it on helping people,” Sandra commented. “Martin Luther King said, ‘An injustice anywhere is an injustice everywhere.’ This situation is an injustice. It is not the land of the free in America.” 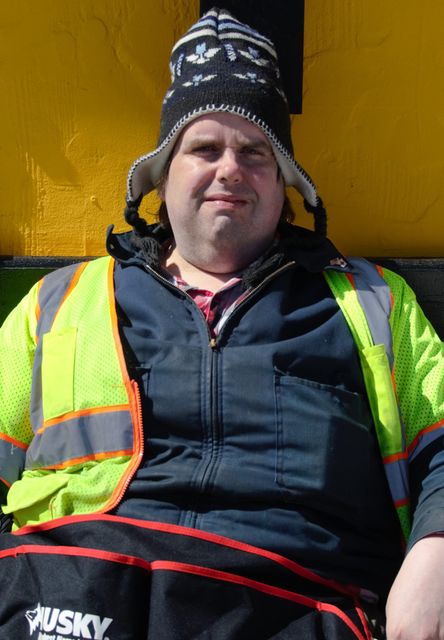 “They should have never switched the water away from Detroit,” said Matt, a former firefighter and vendor at City Market. “Everybody knows the Flint River is terrible. They’ve pulled dead bodies out of that river; entire cars are in there, releasing whatever chemicals come off them. It’s a dirty river, and they know that.

“Just look at GM. They know not to get their water from the Flint River,” he added. “They get it from some private water company because the Flint River was corroding their pipes.

“Flint used to be a great place to live, a long time ago,” Matt said. “But the economy sucks now. Stores are closing—we just lost our Kmart down the street. I hear Walmart might be going somewhere else too.

“And the murder rates. You always hear we’re competing with Detroit for the top rate in the country. But what’s the point of those things? People are getting killed! It’s sad, and it didn’t used to be that way.

“There’s so many empty buildings in this town, they could fill them up with all the homeless people. More and more schools are closing down. Taxes are going up, but that money’s not going to fix these terrible roads.

“They say there’s no money, but I see Obama bombing people in other countries on the news all the time. He said he was going to pull the troops out, but they’re still there. It’s a wreck. They could be using that money here.”

Matt added, “I think it’s a death sentence if they turn off water like they were doing in Detroit with the electricity in winter.”

Latrisha Matson and Cory James Taylor are residents of Genesee County who do not get their water from the Flint water system. They expressed concern over the water supply and dilapidated infrastructure. “Some of the pipes in the city are nearly 120 years old,” Cory noted. 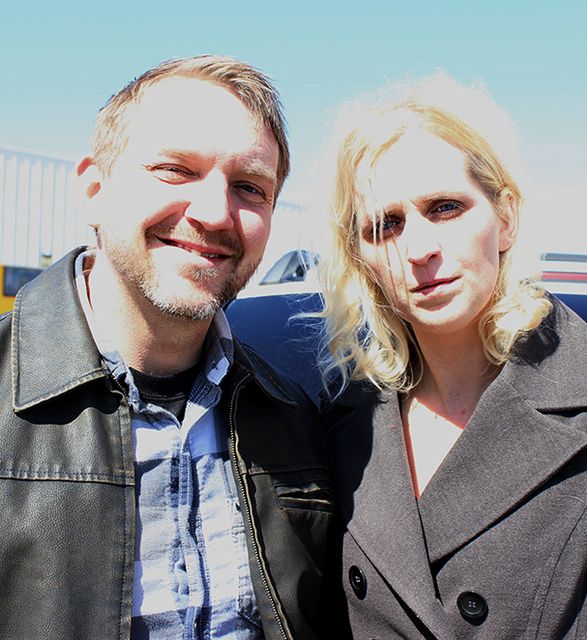 “Water main breaks are common, and the city water department is understaffed and underpaid,” added Latrisha. In fact, the city recently reported that some 400 water main breaks were recorded last year alone.

Working in property management, Latrisha related the difficulties of getting repairs made in a timely manner and rising bills for low-income families. “Water bills have gone way up, forcing some people to move out. I saw a single mother receiving bills for $98 to $130 a month, which is unaffordable.”

“The city is not able to clean the river water with the system they have,” Latrisha added. “All the companies along the river are licensed for dumping. There have been no inspections for years.”

They pointed to the lack of funding to schools and the high cost of other bills, such as car insurance, as a result of the worsening poverty and infrastructure. Cory, a military veteran with college experience, noted that good paying jobs were scarce. “Most of what you can find are part-time jobs, 20 hours a week for $9 an hour,” he said.

“I put my three kids in another school district,” Latrisha commented. “I don’t want to raise my kids in these kinds of conditions. A lot of people just want to get out of here. But at the same time, we were born into this. My grandfather and my father both worked for GM.”

She added, “I feel like they are letting everything get pulled down from the inside out.”