Baltimore workers and youth speak out

On Saturday, World Socialist Web Site reporters went to the neighborhood of West Baltimore where Freddie Gray lived, and where on April 12 police brutally arrested the 25-year-old before sending him on a forty-minute police van “rough ride” around the city. Gray went into a coma and died one week later.

Residents spoke about Freddie Gray, and what they saw and heard the morning of the arrest. They also told us what it is like living in Baltimore, describing a situation of everyday police violence and economic desperation. 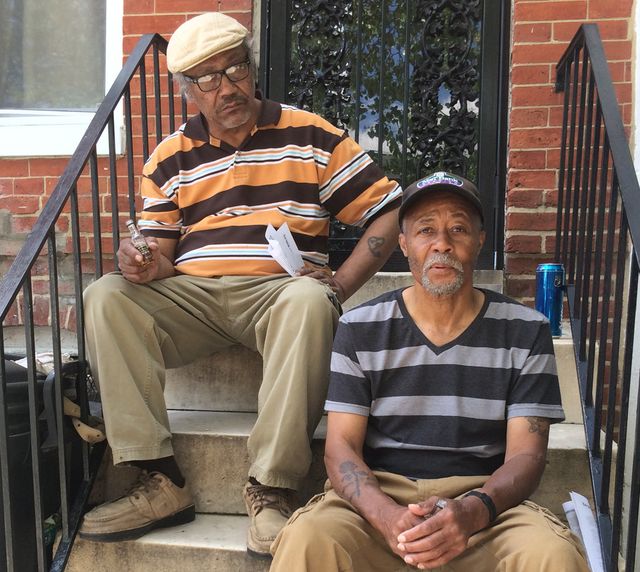 Tobias, 69, a retired construction worker, was a witness to the initial police brutalization of Freddie Gray, whom he remembered as a “good, quiet man.”

“I was in bed sleeping,” Tobias said, “when I heard a lot of screaming. I looked out my window. They were beating him with batons. Everybody seen it.”

“Those police ought to be in jail for the rest of their lives,” he said. “You don’t treat an animal like that. What has to happen to make this stop is to make an example of these police.”

We asked Tobias and Bernard about social conditions in the neighborhood. “God bless the retired people,” Bernard, 70, responded. “Because there are no jobs around.” 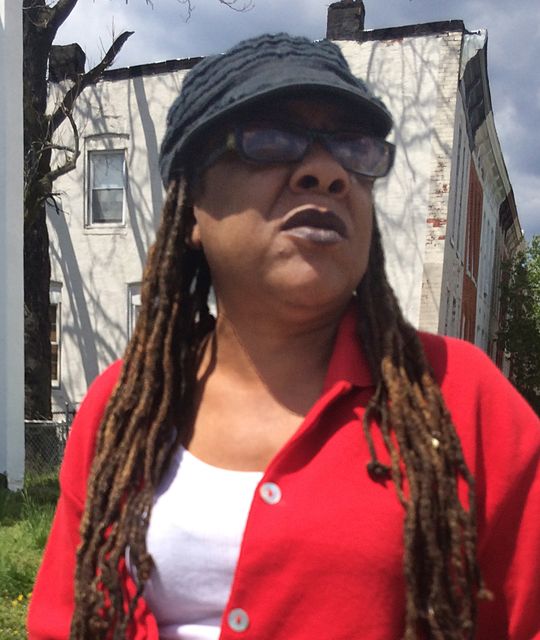 Michelle, 58, who has been unemployed for two years, was a friend of Freddie Gray. “I was visiting with Freddie the Saturday before he was arrested. Basically he was a good guy, a people person,” she said. “Everyone loved him.”

“I saw when they arrested him too. He was just standing on the corner looking at the officers, and then they had him down on the ground and he started screaming. He was still screaming as they loaded him up in the wagon. They just threw him in there.”

Chastity, Charles, Benita, Matt and Sean are all college students at Morgan State University in Baltimore. They had come to visit the neighborhood where Gray was killed. 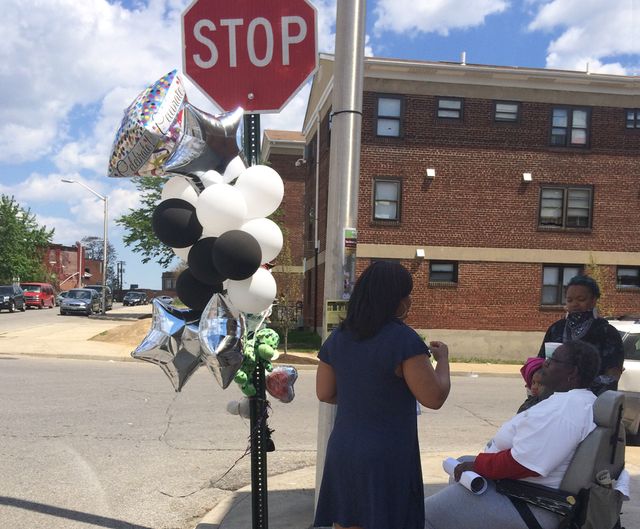 The intersection where Freddie Gray was arrested

“I would say that most of West Baltimore is basically an economic and social drought,” Chastity said. “This is a community where people have no jobs, no resources, and there is such low funding for education.”

“The best way you can describe it is a war zone,” Charles said. “The issues here in Baltimore today are really generational. There are African-American men all around the country with little hope, who act out in anger or get victimized by the police. Freddie Gray is another Michael Brown.”

Chastity added, “There are no resources, no jobs, and it’s the same in cities across the country. All the ‘hoods are the same. The media, they only want to focus on looters. These are kids. They try to control their rage, but rioting is the voice of the victims.”

We asked the students what they thought of President Barack Obama and Mayor Stephanie Rawlings-Blake referring to the rioters as “thugs.” 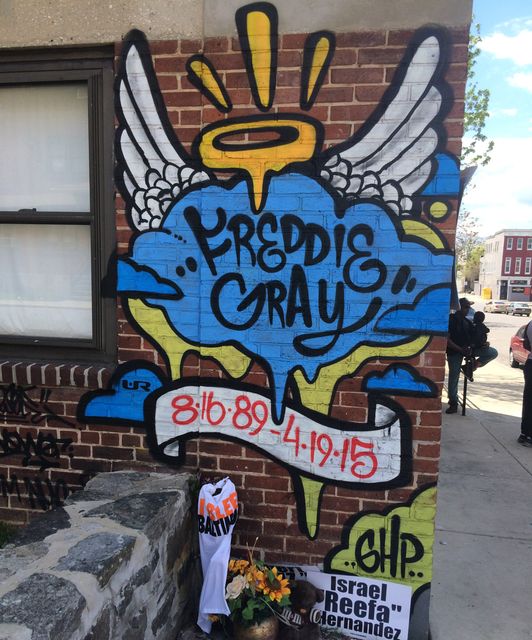 “It’s disgusting,” Benita said. “They are children. Why are you calling children thugs? The people who were rioting were angry, but you have to understand the conditions behind their anger. A lot of them are young people with no opportunities. Young people are the future of this community and of the country, and for the mayor to call them ‘thugs’ shows a total lack of understanding for how things are in West Baltimore.”

We pointed out that after the police murder of Michael Brown in Ferguson last year, many people tried to say that the problem was that there was not a black police chief or a black mayor, but in Baltimore the city is dominated by black politicians.

“That’s because it’s not really about race,” Matt said. “It’s really a question of elitism. It doesn’t matter if it a Democrat or a Republican in office, you still get the same policies of law and order.”

As we parted ways with the college students, a military Humvee rumbled down the street in front of us. 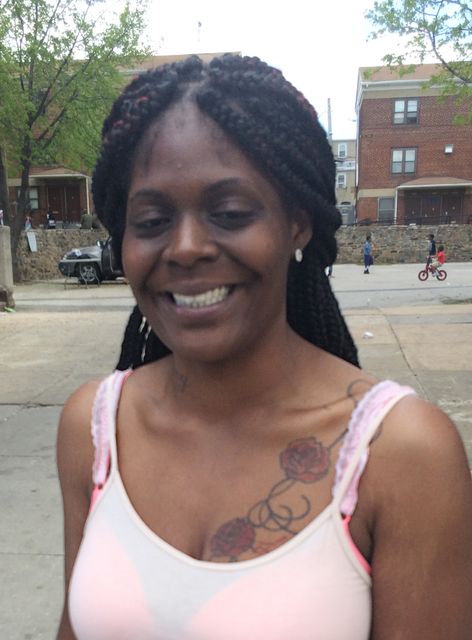 Lauren lives across the street from where Freddie Gray lived, and knew him. “He was a good person,” she said. “I saw what they did to him at the second stop. I saw them drag him out and put leg shackles on him. Why did they have to do that? They already broke his legs before.”

We asked Lauren to say something to the WSWS worldwide readership about what it is like living in West Baltimore.

“It’s like a constant police purge around here,” she said, and she then described an incident when she was attacked by police.

“They pulled in over there,” she said, pointing to a parking area behind her. “Whenever the police come, we always all come out to see what they are going to do and to take pictures. I came out too, and one of the police handcuffed me and slammed me face down on the curb. You can see I’m little. It hurt my face and my back. They took me in and put me in jail, and I lost my job in health care. Jobs are scarce here.”

“I don’t think it’s a black thing or a white thing. A lot of these cops are black. It’s a blue thing,” Lauren said, referring to the color of the police uniforms. “The police serve the Republican part of downtown, where you have all these high-class Caucasians and African-Americans. There is a lot of animosity here in our neighborhoods after years and years of policies that serve that part of the city.” 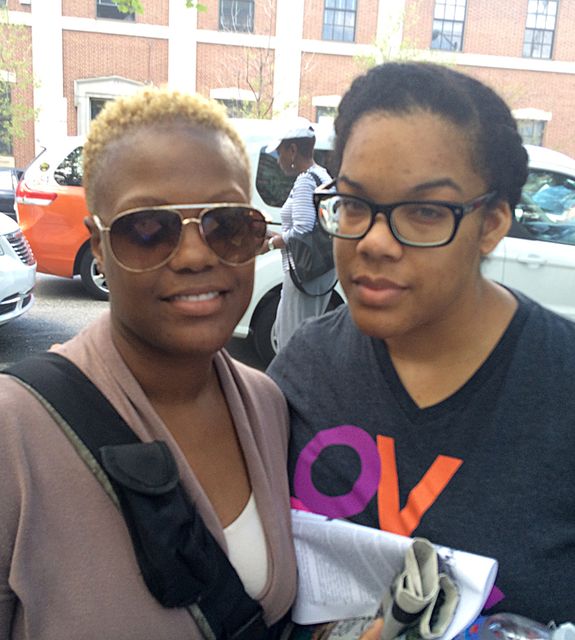 Kalilla, whom we met together with her friend Leann later, at Saturday’s downtown Baltimore rally for Freddie Gray, described a similar experience.

“I was at Hamilton swimming pool with my sister and our children in 2006,” she said. “Police came into the pool area and fired their guns, so we ran and jumped into our car. They came up with their guns drawn and pulled us out, and pushed us down on the curb. And they put handcuffs on us. All of this in front of our little children.”

We asked Kalilla and Leann about the connection between war and police repression in Baltimore. “It’s really unsettling,” Leann said. “It’s a war zone. When I see these people in uniform and these armored vehicles, it’s like Iraq or Afghanistan. You’ve got military here. And you’ve even got snipers,” she said, pointing to the heights of a nearby parking ramp.

“The situation here goes beyond racial lines,” Leann said. “It’s between either the haves or the have-nots.”