Every day up to 500 refugees arrive in the reception centre in Berlin’s Moabit neighbourhood, known as LAGeSo. Their treatment can only be described as inhumane. After weeks of queuing many remain unregistered and they must wait outside the offices in the wind, rain and cold.

Refugees who have travelled for weeks or months to escape war zones in the Middle East, who have often sold all their possessions in order to reach the alleged “safe haven” of Germany find that they are treated worse than cattle, who are at least given shelter from the cold and rain. 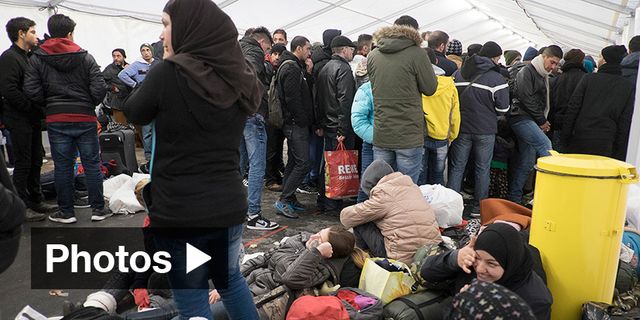 “Moabit helps”, a volunteer organisation that distributes aid to refugees at the reception centre alleges that the city of Berlin has ignored laws governing the treatment and protection of asylum seekers. LAGeSo is refusing to properly distribute money, is providing no health care, offers inadequate food supplies and provides virtually no information to those forced to wait.

In a press statement, the organisation describes the situation as follows: “Families with babies lie on cold concrete, people without lodgings wander aimlessly through the city, sleep every night … in tents, in parks or with friends in overcrowded apartments. They are denied access to hostels despite having official accommodation permits, or they are kicked out after a few days.”

An even greater disaster has so far only been prevented by the tireless work of many volunteers, but as the weather turns colder, the situation is becoming increasingly dire. “Neither LAGeSo nor the Berlin Senate has provided any protection for the refugees against the increasingly colder temperatures,” the organisation said in a statement. “People wait outside. There is no weatherproof waiting room. Sheltered waiting areas have been available for weeks, but have not been cleared for use.”

Many of the refugees come from warmer countries, and are not prepared for northern European winter temperatures. Without the tireless support of private and voluntary organisations, thousands of people would starve and freeze. Untreated diseases caused by war, their long and exhausting flight combined with the intensely cold weather pose a mortal danger.

The Berlin Senate readily coughs up hundreds of millions of euros for the reception of dictators like Egyptian President al-Sisi, prestige projects such as the city’s bid to host the Olympics or for the botched new Berlin Airport, but it is not prepared to provide basic facilities to refugees despite the fact it is legally obligated to do so, the organisation said.

An asylum seeker from Syria who had to wait five weeks for the registration of his application for asylum told the daily Die Welt: “I’m desperate. We came here because we have fled the war and destruction in Syria. But here you treat us like insects. We are not regarded as human beings.”

The dire state of the LAGeSo reception centre has been well known for months. While the population of Berlin has provided enormous voluntary support, Berlin authorities have refused any moves to improve the situation facing refugees.

Much of the responsibility lies with the current Berlin Senate, headed by Mayor Michael Müller (Social Democratic Party, SPD) and Social Senator Mario Czaja (Christian Democratic Union, CDU), as well as Müller’s predecessor Klaus Wowereit (SPD), who governed the city through 2012 in a coalition with the Left Party. As part of an austerity program the former SPD-Left Party Senate had slashed social services, resulting in 35,000 public sector job cuts, including several hundred at LAGeSo.

“Moabit helps” has called for a protest demonstration to be held on Saturday in Berlin. Michael Ruscheinsky, a volunteer with the organisation, told the WSWS, “On the one hand I was surprised by the bureaucratic callousness and coldness of the Senate in dealing with these people. On the other hand, I was taken aback by the enormous solidarity on the part of ordinary people and the unselfish, tireless dedication of volunteers.”