In the rugged, mountainous region of Central Appalachia—covering West Virginia, eastern Tennessee and Kentucky, and Western Virginia—many towns and cities exist because of a particular industry. Sometimes, the name of a town itself shows this: for example, Alloy, WV, where a silicon metal alloy plant is located on the banks of the Kanawha River. Countless towns were built around coal mines, many have which have faded away as mines closed, or become shells of their former prosperity. Indeed, Prosperity, WV is a place, located near the high-quality coal in Raleigh County.

The railroads, built through the challenging terrain of the Appalachian region to transport its valuable resources to domestic and international markets, created railroad towns. The sorting of traffic, maintenance of track and equipment, and administrative tasks created hundreds of jobs in cities across the region. 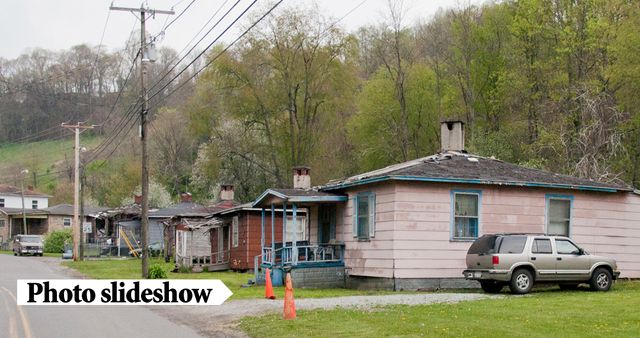 In the last two months, mass layoffs of railroad workers in response to falling coal traffic have called into question the fate of several towns that are inextricably linked to the railroad industry, where generations of workers have been employed by railroads.

The most severe blow was the sudden October 15 announcement by CSX Railroad that it was effectively ending operations in Erwin, Tennessee, a yard and maintenance base on a major route through the area. Employees of the railroad in Erwin heard the news in the morning at the beginning of their shifts, and then some spent their shift assembling all the equipment in the yard into the last train to leave town. When it did, 300 workers lost their jobs.

On October 20, CSX announced another 180 layoffs of yard and maintenance in Corbin, Kentucky, another major regional terminal. Due to declining coal traffic, the railroad closed the locomotive terminal and car shop, where workers inspect and maintain equipment. A hundred employees will remain and the terminal will stay open.

In both Corbin and Erwin, CSX stated that workers have the option of moving for work outside of the area—which could mean hundreds of miles away. An engineer wrote in the Erwin Record that with the last shift of crews, the conversation was “Where you going, Nashville? Birmingham? Etowah? Tampa?.” Followed by the “It’s been good working with you,” then “the handshakes, the hugs, the misty eyes, the turns and walks away.”

The positions of engineers, conductors, maintainers, and repairman were skilled operating or mechanical jobs with wages that are not commonly available elsewhere in the region, and their loss will have a devastating impact on the local economy and the workers affected.

The same malaise—the loss of better-paying industrial jobs that were the root of communities in central Appalachia—has progressed further along this October in West Virginia, as Norfolk Southern Railroad reduces operations. On October 1, it suspended operations between Mullens, WV and Princeton, WV, ending over a century of continuous operations over the route.

After rumors of job loss, the railroad claimed that all employees would be able to find work nearby, but in Mullens, the damage has been done gradually. Both Mullens and Princeton originally had maintenance facilities and yards where hundreds of workers were employed by the Virginian Railway, which built a railroad from the Kanawha River Valley in central West Virginia to a port in Suffolk, VA. That railroad was merged into the giant coal-hauler Norfolk and Western in 1959, which gradually closed facilities and consolidated operations.

Successor Norfolk Southern, one of the four largest railroads in the country, laid off 73 employees in the region in 2014, including 20 in Mullens. The suspension of operations east of the town inevitably leads to less work for maintainers and other workers, and could lead to further reductions.

In 1960, before the railroad layoffs in a railroad town began, the population of Mullens was 3,544. Today, it is estimated to be lower than 1,500 people. Like so many Appalachian towns, the change is visible in the abandoned downtowns, closed stores and schools, and tragic state of some homes.

The layoffs at railroads follow over a year of mass layoffs in the mining industry in Western Virginia and Kentucky, where thousands of workers have lost their jobs. In August, West Virginia recorded an unemployment rate of 7.6 percent, the worst in the nation and more than 2 percentage points higher than the national average. Simultaneously, government services have been slashed.

Coal production in Appalachia has been declining for years, with cyclical fluctuations depending on market conditions, but in the last year a combination of circumstances have caused dramatic drops in production. In West Virginia, the second-largest producer in the country, coal production fell 15 percent over the past year.

The coal industry has been waging a campaign against what it claims is the Obama Administration’s “War on Coal,” referring to stricter Environmental Protection Agency emission standards at power plants. Those restrictions have, in part, caused several dozen units of older power plants across the northeast and southeast to shut down, as the cost of adding new technology to units that are already 50-75 years old was deemed too high by the utility companies.

At the same time, many power plants have switched to natural gas as a cheaper fuel, as it has fallen enormously in price over the past several years. In Appalachia, the production of “thermal coal” for energy production has sharply fallen in response. Appalachian thermal coal is also not cost-competitive with Powder River Basin coal in Wyoming or Illinois Basin coal, which both are strip-mined with far less labor. These sources are cheap enough that some southeastern power plants receive it by rail instead of Appalachian coal, despite the much greater distance.

In the reduction of coal traffic, what has gone unmentioned by coal companies—or CSX in its press release for mass layoffs—is the impact of global economic downtown on mining. Aside from thermal coal, Appalachia produces huge volumes of high quality “met coal” which is used in steelmaking and sells for a much higher price than thermal coal. When coal mining began in the region, railroads were set up to take met coal north to the Great Lakes for shipment to steel mills, and east to the ports of Norfolk, VA, and Baltimore, MD for export abroad.

That flow of coal has continued with large fluctuations to the present day. In 2009, the global recession caused met coal production to drop to 6.5 million short tons, as the price tumbled. But by 2011, the massive demand for met coal for steel production in China caused global prices to triple and American exports rose to 20.2 million short tons. At this time, the big producers went on a merger spree and expanded production, taking on huge debt. Now, prices have plummeted to their lowest since 2004, production has fallen, and many coal giants have collapsed with it. Alpha Natural Resources, the second-largest producer in America and a big producer of met coal, is one of several coal companies that has filed for bankruptcy this year.

Continuing a long trend, the layoffs in mining and railroads will further increase the grinding poverty that is present throughout Appalachia, as tax revenues plummet, mining companies eradicate pension and health care obligations of former workers, and entire towns lose their major employers.

In an October 14 conference call to investment analysts, Cindy Sanborn, CSX executive vice president and chief operating officer, said that “everything is on the table” in regard to further cutbacks in the Appalachian region, adding that both facilities and routes were up for closure. This continues decades of closures and cutbacks by railroads to please investors.

CSX’s exit from Erwin, TN was combined with the suspension of operations over 20 miles of trackage, which severed the line as a continuous route to the southeast. This is perhaps one of the most egregious cost-cutting measures in the present-day rail industry, as the route is the most geographically direct route for the coal, agricultural and industrial traffic from the midwest to the southeast. Daily trains of coal, of grain, and mixed merchandise will now have to travel hundreds of miles out of their way to reach destinations, which CSX absurdly describes in its press release as “efficiently rerouted.”

Some of this traffic will now move east to Richmond, Virginia, then South into the Carolinas. On that busy route, which has dozens of freight and passenger trains, CSX ripped out hundreds of miles of second main track in the 1980s to save money, which also substantially reduced capacity. More recently, the state of North Carolina used public money to expand some of that infrastructure to help improve the performance of public passenger trains—capacity CSX will now take for its “efficiently rerouted” freight trains.