The World Socialist Web Site Autoworker Newsletter spoke with Fiat Chrysler workers at the Warren Truck Assembly plant in suburban Detroit Thursday about the political significance of the rise of Republican frontrunner Donald Trump and the dangers this posed to the working class.

Hundreds of workers during the afternoon shift change took copies of the Newsletter, which included the March 3 WSWS perspective “What political conclusions must be drawn from Trump’s Super Tuesday?”

The WSWS spoke to workers just hours before the Republican debate in downtown Detroit, and a day before Trump was set to appear at a campaign rally at Macomb Community College, also located in the working-class suburb of Warren. Michigan’s primaries will be held on March 8. 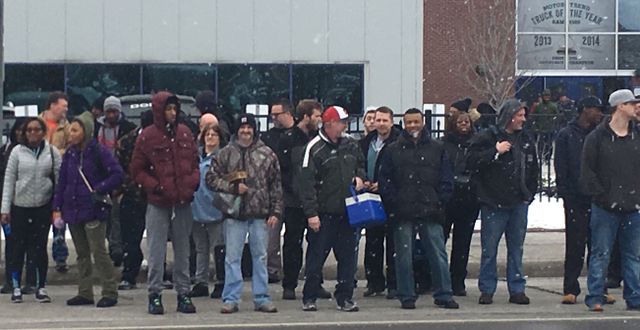 As workers—black, white and immigrant—rushed into the plant to start their shifts, many expressed their hostility to the right-wing candidate. Very few identified themselves as Trump supporters. One who did, a woman worker, repeated the candidate’s visceral hatred of immigrants for supposedly causing crime and high unemployment.

Several workers who stopped understood that Trump was trying to exploit widespread social discontent over falling living standards, job insecurity and a general distrust of the government and other official institutions.

Donna, another veteran worker, said, “People are angry. They want a bully. He doesn’t know anything about politics. It’s never going to change until we change it. But they keep blinding us with all their different agendas. They never think about the fact that with no wages, no pensions, no health care, who will buy the products that will make them richer?”

“There are a lot of people that are angry, ignorant and fearful,” Keith said. Another worker said, “Trump never had to work a day in his life. Now all of sudden he’s worried about us? That’s a laugh.”

“He’s a fool. Somebody has to be behind this so when Trump drops out the Republican candidates left will look more reasonable,” Evan, a young worker, said.

The hostility to Trump’s racist and xenophobic demagogy did not translate into support for the Democrats. “People are fed up, and they don’t believe any of the politicians,” a worker said as he rushed by. “They want change—but that is how Obama got in.”

“There is no recovery,” another worker said. “The politicians and the media say the economy is doing great but they’re making money, and they’re not feeling it like we are.”

“The only good thing about the Trump campaign,” Chuck, another veteran worker, said, “is that he is smoking out all the racist idiots.”

Chuck was angry with the Democrats too, though he said he planned to vote for Bernie Sanders. A WSWS reporter pointed out that Sanders was trying to keep workers tied to the Democrats, who, no less than the Republicans, are controlled by the billionaires. The Democrats also promoted identity politics, the reporter said, and claimed that the problems in America would be solved by elevating more blacks, Hispanics and women into positions of political and corporate power.

“We already have a black president and a black attorney general,” Chuck said. “That hasn’t solved anything.”

Chuck, who said he reads the WSWS Autoworker Newsletter, continued, “Workers need our own party—but it has to be international. The capitalists are scared of workers getting together. [Fiat Chrysler CEO] Sergio Marchionne thinks that workers are stupid and tries to pit us against each other. But you know what, there is something called the Internet. Workers can get online and see what a worker is making in Germany or another country.”

In 1980, President Reagan won the majority of the vote in Macomb County, long a bedroom community of workers known as a “union stronghold.” At the time, the Republican candidate exploited economic worries over the collapse of the auto industry, and the lack of any alternative presented by the Democrats or the United Auto Workers (UAW), to gain support for his attack on social programs and criminalization of the most oppressed sections of the working class.

The decades-long attack on workers and the endless wars and assaults on democratic rights carried out by both big-business parties have shifted workers and young people in Macomb County, like their counterparts throughout the US, to the left. Child poverty in the mostly white county increased 50 percent between 2005 and 2011. More than 12 percent of the county’s residents now live below the official poverty rate.