Explosive anger is developing among broad sections of workers and youth to the El Khomri Law. It would increase the working day by up to two hours, undermine job security for young workers, and allow the trade unions and businesses to negotiate deals violating France’s Labour Code. This nakedly pro-business bill has provoked anger and revulsion among broad layers of workers hostile to unpopular PS president François Hollande.

Police responded with a violent and bloody crackdown against a number of protests across France yesterday. In many cities, the trade unions made little or no effort to mobilise workers in support of the university or high school student protests. Police attacked them violently, trying to intimidate youth in the run-up to the next major protest by workers and students, called for April 9. 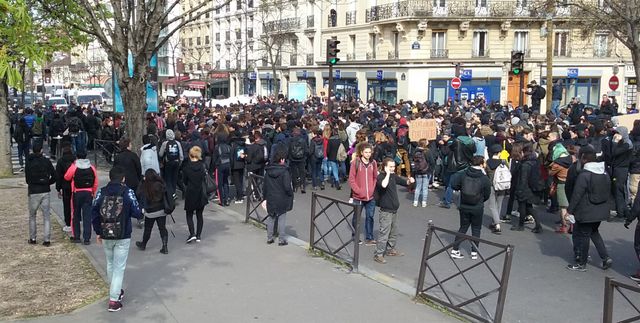 In Lyon, a few union officials attended the student protest. Police blocked the protest—prompting shouts of “State of emergency, police state!”—and only authorised the march to begin “given that the situation is under the control of the trade union organisations.” Several students were arrested or hit with batons as clashes erupted between police and demonstrators towards the end of the march, with one student taken away in handcuffs and another heavily beaten with batons.

In Paris, some 130 protesters were detained by security forces during a student protest that left from Nation Square. In the run-up to the march from Nation Square, as well as at the rally called by student and trade unions on Bastille Square later in the afternoon, large numbers of plainclothes police could be seen discussing tactics with riot police before leaving to blend into the crowd.

WSWS reporters spoke to protesters at the Nation and Bastille Square protests. At Bastille, the WSWS spoke to Ada, who is working towards a technical high school degree and has an internship at a factory. “I’m opposed to the law to defend the workers and also the future for us, the students,” she said.

Asked what she thought the impact of the law would be, she said, “I think we will be under ever-stricter rules, because conditions for those of us not working on permanent contracts will be shit. It will separate us more from those with permanent contracts. … We will be each on our own sides, and that is ridiculous because we should be all together.” 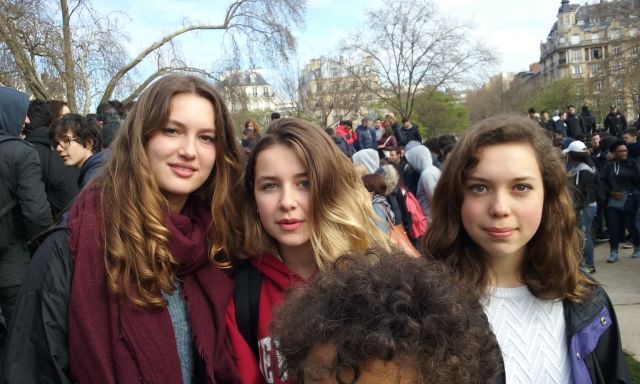 Many students took part in the demonstrations

Asked about the state of emergency, Ada said, “It’s ridiculous…for example, if someone is unarmed and [police] think that they might do something harmful, they can hit this person for no reason, and I find that ridiculous. Also, they can enter into people’s houses without a warrant, but everyone has a right to a private life.”

Ada criticised the presence of police at demonstrations. “I find it very stressful. It leads to all sorts of tensions,” she said. “The youth get angrier when there are policemen everywhere. It produces bad blood, we are surrounded and don’t have the right to leave the march for any reason. Once you’re marching, if you need to leave or if you want to stop in a café, you get attacked for no reason.

“I saw a guy who got carted off by the cops,” she added. “I feared for him, because I didn’t want them to hit him. I knew that if I stayed in front of him, they might not hit him because I would be there to watch and then to tell them that they can’t hit people like that for no reason.”

The WSWS also spoke to a group of students from Sophie Germain high school who were protesting at Nation Square. They said, “Now it’s a month that we’ve been protesting, and it’s become about much more than simply the labour law reform. It’s against all the consequences of this government over the last several years.”

Asked what they opposed, they said, “First there is the labour law itself—some of its stipulations cannot be allowed, like limiting fines [for illegal mass sackings by employers]. Some of them will be modified under pressure from the demonstrations.”

Another student added, “More generally, it’s against all the empty talk of the politicians. They say we will do this or that to help the youth. Hollande said that one of his projects is the youth, but what has he done? He dictates laws that will not help our future.” 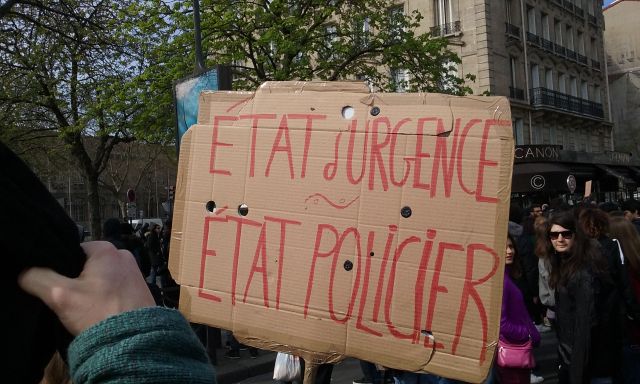 The students were divided about the state of emergency, with one saying its goal is “to ensure the security of the population, but it should not be abused.” Another student attacked it as “a pretext to do other things that are convenient for the government,” a sentiment echoed by the third student, who said it “allows for passing all sorts of other things that they want. For example, they use it to limit protests, supposedly because there is a state of emergency we cannot go protest, which is totally stupid.”

The WSWS also spoke to Nathan, who said he hoped that protests would continue “throughout the spring…the whole spring we should be in struggle.”

“A general strike is developing in the universities, high schools, and work places, though not necessarily in offices in some places. I want to send a strong signal to the workers. … We can win if we stay united,” he said, though he complained that “no political party is proposing a general strike.”

He said that French society is becoming “more severe and with more law-and-order hysteria” and warned against “bombing and massacring populations in the Middle East.”

“Behind the state of emergency, there is the state and big business. It’s to increase the power they have to repress social opposition. We have to consider this struggle very carefully, these are methods of big business to violently attack social protest.”

The November 2015 Paris terrorist attack at the Bataclan theater