Obama’s labor board intervenes on behalf of Verizon strikebreakers

A federal district court judge has issued an order barring striking Verizon workers from picketing New York City hotels housing strikebreakers hired by the company. The court acted in response to a petition by the Obama administration’s National Labor Relations Board (NLRB), which claimed the picketing violated the ban on secondary boycotts under provisions of the National Labor Relations Act.

The action follows the injury of a Verizon striker outside a New York hotel housing scab replacement workers. On Monday, a van carrying scabs from a hotel and being driven by a New York City police officer stuck and injured James Smith, a member of CWA Local 1109, who was reportedly sent to the hospital. Strikers said that the driver of the van was a police lieutenant from the 108th precinct of Long Island City.

The NLRB’s general counsel has issued a complaint against the Communication Workers of America (CWA) and scheduled a hearing for June 9.

Meanwhile, no charges have been filed against the cop who injured the striking worker, and the CWA has not issued a statement on the incident.

The injunction underscores the bankruptcy of the strategy of pressuring the Democratic Party. The actions of the NLRB supplement the strikebreaking role of New York City Democratic mayor Bill de Blasio, who has penned picketers behind barricades while mobilizing scores of cops to escort strikebreakers across their picket lines.

Verizon Communications has stepped up its strikebreaking efforts against the 39,000 workers who have been off the job since April 13 against massive concession demands. It has increased the hiring of scabs to supplement the 20,000 management personnel along with contractors that have been trained to fill the jobs of the striking workers. Many managers were also transferred into the region from Verizon areas not affected by the strike. In addition, the company claims that about 1,000 striking workers have returned to work.

Other confrontations throughout the region are being reported. Verizon has apparently instructed its scabs to confront and try and provoke picketers. In Cambria County, Pennsylvania, police were called to investigate a fire affecting some Verizon equipment, which the company claims was set by strikers. During the 2011 strike, the company made hundreds of phony charges to blame strikers for the breakdown of their equipment.

The stepped-up strikebreaking by Verizon with the backing of the Obama administration follows the decision on May 1 by Verizon to terminate health insurance and life insurance coverage for the 39,000 workers and their families.

Verizon is demanding deep cuts to health care for both active and retired workers. In addition, Verizon is demanding changes to work rules that would lead to thousands of jobs being destroyed. Under Verizon’s proposal, workers could be forced to transfer up to 100 miles from their current work location. In addition, workers could be forced to work anywhere in the region for up to 60 days a year. Verizon is also seeking to close 11 of its call centers, consolidating them into mega-centers as well as having an even greater share of calls handled by non-union workers. In what the company termed its “last, best and final offer,” the company did not back away from any of its demands.

In the face of this assault, the CWA and the International Brotherhood of Electrical Workers (IBEW) are working to isolate the strikers and impose the vast concessions. The CWA and the IBEW kept the workers on the job for eight months, giving Verizon time to fix troubles and train its workforce before calling the strike. The IBEW, meanwhile, has told its members to go look for other jobs.

The CWA hinted in a conference call on Monday that it would order strikers back to work, even without a contract as they did in 2011, if only Verizon would give them something that they could sell to their members.

The CWA and the IBEW do not represent workers; rather, they represent a highly paid parasitic bureaucracy, which is seeking to secure its position as a second layer of management for the company.

The World Socialist Web Site , which is calling upon workers to form rank-and-file committees to take the organization and leadership of the struggle out of the hands of the union officialdom, has been receiving wide support among strikers, many of whom have signed up for the WSWS Verizon Strike Newsletter and are reading our site daily.

WSWS reporters have spoken with workers throughout the region.

Numerous workers at a picket line in northern Virginia expressed their appreciation to the WSWS for its continued coverage of the strike; many also indicated that they have been following the web site.

“We haven’t heard anything about this, no one except for you guys have reported it,” said one worker, speaking of the New York City Police Department violence toward the strikers. Workers expressed dissatisfaction with the trade union and the two-party political system to reporters from the WSWS Verizon Strike Newsletter, with a common refrain being that the CWA and the Democratic and Republican parties were “in bed together.”

“I am ignorant to politics in the United States,” said Oscar, who indicated that he was originally from Mexico. “But I see this country heading in the direction of revolution; there was a Civil War in this country once before, the question becomes how do we convince young people and workers that a revolution is the way forward?” 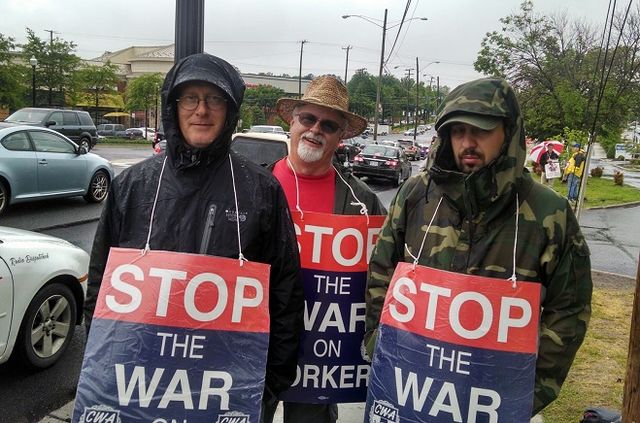 Replying to this question, a reporter from the WSWS indicated that the act of social revolution was undertaken when the current social order was deemed to be intolerable to masses of people—forcing them to forge a new path forward as a social class. It was explained that a revolutionary outbreak was inevitable in America as well as internationally, and that it was the job of working people to educate themselves on the lessons of the 20th century to prepare for the struggles ahead.

Joseph, a worker with more than 10 years at Verizon, interjected, stating that younger people in America not only had it worse than their parent’s generation, but “they have it worse than people their age had it just five years ago.” Joseph spoke about his time living in Ohio recently: “There were only two places in town you could get a job where I was—Cooper Tire and Lexis Nexus. There were scores of young people with no jobs— underage parents, you name it. A lot of young women try to have children with older men because there’s really no jobs available to anyone younger than 30.”

Speaking about the New York City Police Department’s efforts to aid strikebreakers, Joseph said, “It goes back to the 2001 Patriot Act; you can’t even form a union today because if more than nine guys congregate out here, it can be considered a ‘subversive activity.’” When WSWS reporters pointed out the relationship to the state’s repression of peaceful protests and the attempts to break their strike, Joseph said, “I think we’ve had far too many freedoms taken from us in the name of ‘freedom.’ It’s funny because most of the things that harm us are usually (falsely) named things; for instance, the Democratic Party isn’t really democratic, and the Republican Party isn’t really republican.”

When asked by the WSWS about union reports about numerous striking workers in Virginia crossing the picket lines to go back to work, Joseph stated that the strike fund at the national level was only giving workers several hundred dollars a week to remain out. “The union is a multibillion-dollar non-profit corporation itself,” he said, noting that it was looking out for its own bottom line.

Both Michele and Pamela work in the repair call center, taking calls from customers, fixing their troubles when they can, and dispatching technicians when needed.

“We’re Bell babies,” said Michele. “Both our parents worked for Verizon. My mother retired 16 years ago after working 42 years for the company. They have doubled her co-pays, and now they want to make her pay for her benefits. 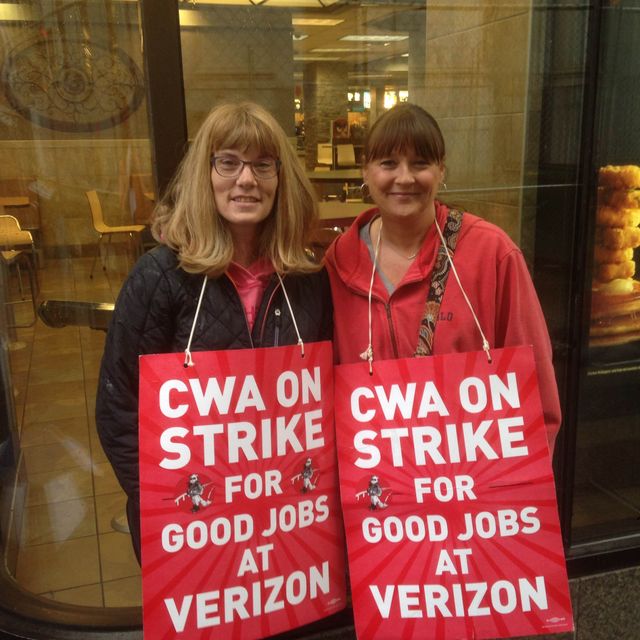 “It is not just us, but we are fighting for all the people who built this company. Every three years, the company is trying to take more and more away from us. You work all that time, with the expectation that you will get a pension and health care, and now they are saying they could take it away at any time.

Pamela agreed. “My parents worked all these years to make this company, and all they care about is making more money.”

Describing the working conditions, Pamela said, “they make it impossible to get a satisfactory rating. We have to finish each call within four minutes, but sometimes the customers are very angry and it takes time to calm down and work on their problem. Then the customer gets a survey, and if we don’t score a 5, we get 0 points toward our review.

“The company also records every call. You have to end every call by asking the customer if they received five-star service. If you forget to ask, you get a bad rating. If management doesn’t like you, they can look through the calls to find stuff against you.” 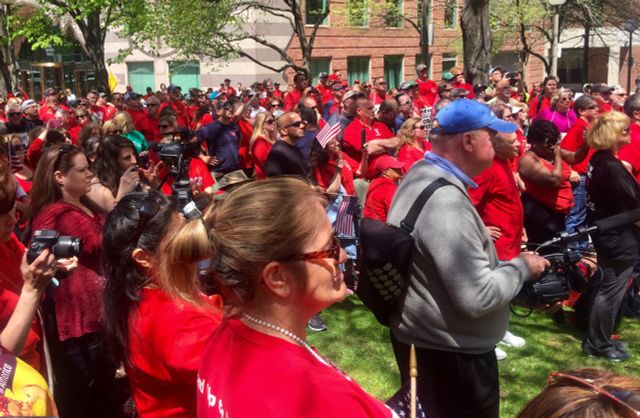 No mention was made of the strikebreaking operation in New York or the worker who was struck by a van carrying scabs in Queens.

“We went up to Nashua one morning and confronted them there,” he said. “The police blocked off every street in the neighborhood to let all of them leave.” He said the scab contractors were housed in a motel, and no one knew where they were headed, and the police didn’t let anyone follow them.

Another worker said the current union strategy was to go after Verizon’s retail stores, and they received a lot of public support when they mentioned wages and benefits and the profits of the company.

“This is happening everywhere in the country,” he said. “You’ve got the one-percenters, and they want it all. It’s just corporate greed. It’s been going on for years, the separation of the classes.”