An interview with Babak Jalali, director of Radio Dreams

I spoke to Babak Jalali, the director of Radio Dreams, in San Francisco during the recent film festival. David Walsh: Can you tell me a little about your life and background?

Babak Jalali: I moved with my family from Iran to London in 1986, toward the tail end of the Iran-Iraq war. So we were not among those Iranians who left at the time of the revolution in 1979. My family stuck it out, we stayed. I didn’t go back to Iran for another 14 years. Then in 2000 I started going back once every other year. My extended family all remained in Iran.

In 2008 to 2009 I spent a year in Iran making Frontier Blues, my first feature film, in my hometown, Gorgan, which is up north, near the border with what used to be the Soviet Union. Now it’s Turkmenistan. Making the film was much easier at the time, which was generally chaotic in Iran, because we were not in Tehran.

It’s an area that is very ethnically diverse. I would say up to 40 percent of the population is ethnic Turkmen. There are Kazakhs as well, and Armenians, and Russians. The area has always been isolated. In some sense, it feels more Central Asian than Middle Eastern.

A Pan-Turkish nationalist movement has not blossomed in the area. Although there have been efforts, especially since the fall of the Soviet Union.

It’s a thing about Iran––I despise the term “Persian.” Because I find that commonly used among Iranians in America particularly, they call themselves “Persians.” Persian this and Persian that. Iran is a diverse country. Roughly 25 percent of the population is Azeri, there are Kurds, Turkmens, and so forth. My father speaks a dialect that they would not understand in Tehran. Of course, there are Persians in there too. Curiously, before the revolution and after the revolution, the census always finds that 51 percent of the population is Persian. Somehow that never changes.

DW: How did you end up making Radio Dreams here?

BJ: We made it in San Francisco, Berkeley and Oakland. There is a tight-knit community here. They look out for each other. Southern California has an enormous Iranian community. But it’s a more business-oriented community there.

Marjaneh Moghimi, the producer of the film, is a resident of the Bay Area and has been for 30 years. When she contacted me about two years ago, we had a lot of friends in common. She was very keen on making the film in the Bay Area. I had been here a number of times. I came and spent a month here. We worked on the idea for the film. It happened very quickly. 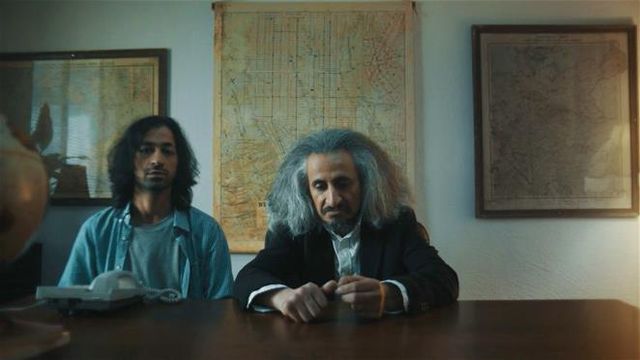 Mohsen Namjoo, the lead actor, is quite an iconic figure in Iran. When I was making Frontier Blues, all the crew were talking about him. He had done underground recordings, he was still living in Iran at the time. Then he made some official recordings as well. He left Iran about six, seven years ago. He’s commonly referred to as Iran’s “Bob Dylan.”

When he started making music, it was something very new for Iran. He was playing traditional music, but he was also very avant-garde in a way. Messing around with traditional music and bringing new elements into it. He’s a character, he’s a performer. There’s a lot of improvisation. He’s extremely intelligent. If he were living in Iran and allowed to make music, he would be enormous. We were lucky to have him.

DW: In a very difficult world, what is the significance of the comic elements that appear in your films?

BJ: Frontier Blues was based on a lot of memories, of the area where I grew up. When you remain in one place, you build up experiences. But I had no new experiences, only memories. At the age of 25, I had vivid memories of things that happened in Iran when I was 5, but I didn’t have such memories of being 16 in London.

It was important to make the first film in my hometown because I always found it, in many ways, an absurd place. This place is generally forgotten about or ignored, there were these characters hanging around and the longings they always had. So the humor came naturally.

BJ: They are a real band. They are commonly referred to as Afghanistan’s first ever rock band. They first emerged in 2009. The media began writing about them, because of the novelty. When I was living here for that month we found out they had actually moved and were living in the Bay Area. So, in the middle of writing the script, this new element came into it. They’re still here.

There are Tajiks and Pashtuns in the band. They grew up outside of Afghanistan during the war, in Pakistan, Uzbekistan, Iran. They all converged in Kabul. They all spoke English because of the fact that they lived abroad.

Leaving the question of talent aside, they are incredibly decent people. If I may say something, and this is something I’ve felt for years, and something I always try to bring into my films––I’ve always had a soft spot for people from Afghanistan. I find them incredibly dignified and incredibly truthful. And unpretentious. The guys in this band personify all that. They are so decent and so kind-hearted.

DW: I’m here in California for the film festival, but also to give two talks on “Art, war and social revolution,” which center on the perpetual war of the last quarter-century and the way it is gnawing away at American society.

But there is another side to it, of course, not only the impact of America on the world, and itself, but the impact of the rest of the world on America. The US has a terrible influence on Iraq, Afghanistan and Iran, but Iraq, Afghanistan and Iran have an influence on America too. This is not 1850 or 1890, when the colonial peoples were safely trapped at home, more or less.

There are various sorts of “blowback,” the most spectacular coming in the form of terrorist bombs. Then there is the tragic mass refugee crisis and its impact. A third form of “blowback,” less dramatic, appears in your film: the Iranian and Afghan immigrants, the artists, their interactions with American culture.

BJ: When we were making the film, the current trauma of the mass emigration was just kicking off. When you have the idea of making a film about Iranians and Afghans in San Francisco, the focus is on migration and its consequences. There was definitely in my head the desire to show a group with a hope, an idea, however bizarre it may be––in this case, bringing Metallica to the radio station––to fill up their mundane lives. Kabul Dreams being in America wanting to meet one of the world’s biggest rock bands!

America is a very peculiar place. I’m not all that keen on the Iranians in Los Angeles, or a certain type at least, and of course I’m generalizing. You can be against a regime, your own, but still not sell yourself out. I would never condone any form of military action against my own country, my own people.

Then you may potentially be seen as hypocritical, because you are living somewhere else, you are trying to exist in another place, still having part of your heart in your original country. I think every single character in this film falls into that category as well. Immigrants are in far more desperate shape than the ones in this film, but I also believe they wouldn’t … just because they have come to Italy, or Sweden, or Canada, it’s not like they suddenly say, ‘OK, let’s send the cruise missiles in.’

The “blowback” you spoke of. You don’t get on a boat and leave somewhere because you want to see McDonald’s everywhere. You get on a boat because you have to get the hell out. And that is often the consequence of what the US or the UK is doing.

With the characters in this film, even though they are not in the worst condition, they are still out of place, finding their way. I was lucky, I was seven, they took my hand and said, we’re getting on a plane, we’re moving. I went to school, I learned English easily. My older brother suffered considerably more. The people in the film, they came in their 20s and 30s. They left a life behind. It’s very difficult.

There’s something else, and I hope Iranians are not the only ones to pick it up. The boy sings a song on the guitar that is an old Iranian Marxist song, a revolutionary song. Roque Dalton was an El Salvadoran poet. There was a café near where I lived called El Salvador, where revolutionaries used to hang out. “Katyusha,” the Russian song, we used to hear all the time. We used to get Soviet television, because it was on the border, and often it was more interesting than Iranian government television.

DW: In other words, Hamid has this left-wing intellectual background. There are various inferences, implications …

BJ: I’d like to go back to what I said before: America is a very peculiar country. For my part, I love American music and American literature in a way I don’t feel about British music and literature. I’ve traveled a lot in this country, all over, and there are a lot of fiercely intelligent people in America, there are a lot of fiercely progressive people in America. They’re not of course the ones in power. That often gets lost, for many outsiders.

DW: What are your plans now?

BJ: I’m making a new film in America actually, which I’ve been developing for four years. It takes place on an American Indian reservation. A fiction film. A contemporary story, about an Indian family and their relations with a neighboring town and the military. I spent time in Pine Ridge, in South Dakota, and also on a Navajo reservation. Of course, I had to fund it in Europe, because American film people didn’t want to hear about this.

Interviews with Directors and Artists