Students and academics at the University of Sydney (USYD) are protesting plans by university management to close its fine arts college at the beginning of next year, as part of a broader pro-business restructure.

Management emailed students on June 21, announcing that the Sydney College of the Arts (SCA) would be merged with the University of New South Wales’ arts college, UNSW Art & Design, at the beginning of Semester One, 2017.

In November last year, USYD announced that Callan Park, where the SCA is located, would be vacated due to “financial sustainability issues.” Discussions have been underway since then between the university and the NSW government about “external opportunities” for the site, which is prime real estate in the suburb of Rozelle in Sydney’s inner-city. Successive state governments, Liberal and Labor alike, have sought to sell-off Callan Park’s 61-hectares of foreshore parkland, which house the SCA, a mental health facility and a writers’ centre. 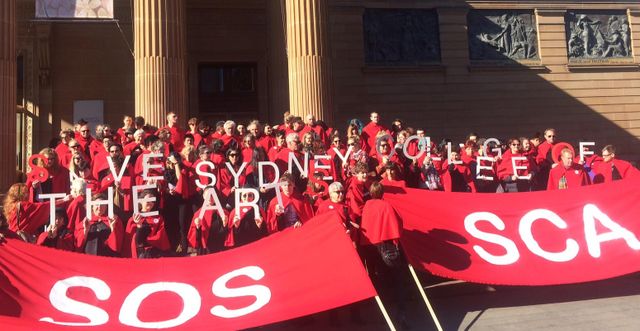 From the outset, university management has sought to nullify opposition to the move. The email informing students of the merger was sent during assessment week, when many were either away on break or focused on completing assignments.

Nevertheless widespread anger over the closure rapidly emerged. At the beginning of July, 60 students launched legal action against the move, alleging that it constituted “deceptive conduct” under consumer law.

A number of demonstrations have also been held on campus. At an information session on the merger organised by university management, students and staff passed a motion of no confidence in the dean of SCA, Colin Rhodes. At the beginning of the month, 200 students attempted to enter a meeting of the university Senate, chanting slogans against the closure of SCA. They were met by police from the “Public Order” division. Last Friday, around 100 students also took part in a protest outside the Art Gallery of New South Wales ahead of the announcement of the prestigious Archibald Prize.

Late last month, Merilyn Fairskye, a former associate professor at the SCA and a well-known visual artist, denounced the merger, declaring, “The University of Sydney is no friend of the arts.” She commented that “the battle to have non-traditional research ... recognised within the university sector has been long and hard fought but, disappointingly, appears to have been to no avail.”

Fairskye noted that much of the funding allocated by the federal government to the SCA is appropriated by central university management, and explained that this was why the college was “financially unsustainable.”

USYD is one of the most corporatised universities in Australia. In December 2015, the university Senate passed restructure plans slashing the number of undergraduate degrees from 122 to just 20. The university’s current 16 faculties and schools are also to be collapsed into 6 facilities and 3 schools. The overhaul is based on a model implemented at the University of Melbourne, which included the destruction of hundreds of jobs.

The closure of SCA is of a piece with this broader agenda. It will see the college’s 700 students forced into UNSW Art & Design, an already overcrowded and under-resourced facility of 3,000 students. Fifty SCA staff members are likely to lose their jobs.

SCA students wishing to study masters or honours degrees in their field are unlikely to be able to do so at UNSW A&D, which has developed a greater focus on design than on the fine arts. Students who choose to attend SCA because many of its teachers are practising visual artists will also be disadvantaged.

The merger is being touted by both university bureaucracies as positive for the arts community. UNSW Vice Chancellor Ian Jacobs claimed the move was “an exciting step towards the creation of a national centre of artistic excellence that will put NSW at the forefront of art and design education and research in Australia.”

There are also discussions about the National Arts School (NAS), located in inner-Sydney, being rolled into UNSW A&D to create one “super-arts” campus. Last month, the lease for the property where NAS is located was transferred to the state government division responsible for earmarking state-owned property for sale.

A “super-arts” campus will curtail the options available to students. Each art college has a different focus. NAS is operated on a classical arts training basis, SCA specialises in contemporary art and UNSW A&D is geared towards design.

The development of arts students is of little interest to the corporate world. With university education ever-more tied to the immediate needs of big business, the conception of an all-rounded cultural education, aimed at creating individuals able to make informed and thoughtful contributions to society, has been abandoned.

The leadership of “Let SCA Stay,” the protest movement that has emerged against SCA’s closure, is largely indifferent to these broader political questions. It has confined students to demanding that all negotiations between USYD, the state Liberal government, and UNSW cease, and that the college remain open. Let SCA Stay is silent, moreover, on the bipartisan character of the attacks on the arts and education.

At its protest last Friday, Let SCA Stay invited prominent Labor MP Anthony Albanese to posture as a defender of public education and a friend of the arts.

None of the other speakers mentioned that it was the Hawke Labor government that abolished free tertiary education, and reintroduced university fees in the late 1980s. That Labor government also launched an “efficiency dividend” to impose annual funding cuts on all sections of the federal public sector, including museums, galleries, the National Film and Sound Archive and other important cultural institutions. These dividends have been maintained or deepened by successive governments, Labor and Liberal alike.

At the same time, the leadership of Let SCA Stay works closely with the National Tertiary Education Union, which has enforced successive pro-business restructures, including at the University of Sydney in 2013, resulting in the destruction of at least 60 jobs, a host of voluntary redundancies and the forcing of 100 academics into teaching-only positions.

The gutting of the arts and education poses major political issues before students and young people. It underscores the need for a mass movement of the working class in defence of the basic social right to culture for all, and to free education, including at the tertiary level. Such a movement can only go forward by rejecting the subordination of social needs, including culture, to the profit interests of the corporations and big business. In other words, it must be based on a socialist perspective.