Los Angeles-based, Australian-born filmmaker Eva Orner is the recipient of numerous documentary prizes, including for Taxi to the Dark Side, which won an Academy Award for the Best Documentary Feature in 2008. The film is a detailed examination of the Bush administration’s use of torture, rendition and other illegal measures in Afghanistan, Iraq and Guantanamo Bay following the 9/11 terror attacks.

Chasing Asylum, her latest feature, is a forceful and harrowing exposure of Australia’s cruel and criminal asylum-seeker detention policies. Currently in limited release in local cinemas, it is the first time footage from inside the offshore detention centres has been screened in Australia. 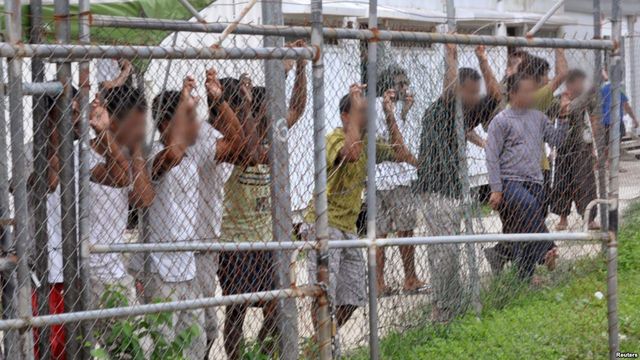 Orner’s documentary, which is skilfully edited by Annabelle Johnson, unmasks the lies of consecutive Liberal-National and Labor governments, lifting the official veil of secrecy on the terrible human consequences of the so-called “offshore processing” program.

Under current law, asylum seekers arriving in Australia by boat are immediately transferred to detention centres located on Papua New Guinea’s Manus Island or the Republic of Nauru in the remote southwest Pacific. The men, women and children are imprisoned indefinitely, not for any “crime,” but for simply exercising their internationally-recognised legal right to seek asylum. 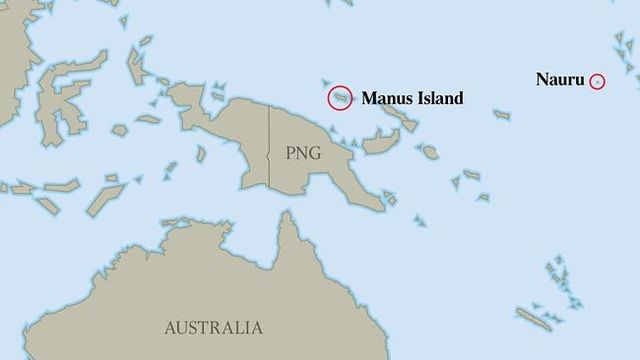 If classified as “genuine refugees,” they are given the choice of settling in Papua New Guinea or Cambodia, among the poorest countries in the world. If not deemed to be refugees, they are either sent back to the countries from which they fled or are incarcerated indefinitely in Australia’s offshore detention centres.

Last November there were over 1,400 asylum seekers, including 70 children, in these camps—926 on Manus Island and 543 on Nauru. They are accommodated in ex-WWII military sheds or mouldy tents without adequate medical and other essential facilities.

Chasing Asylum opens on an over-crowded refugee boat en route to Australia. The voice of an asylum seeker explains that he decided to undertake the dangerous journey because Australia, he believed, was a “free” and “humane” country. 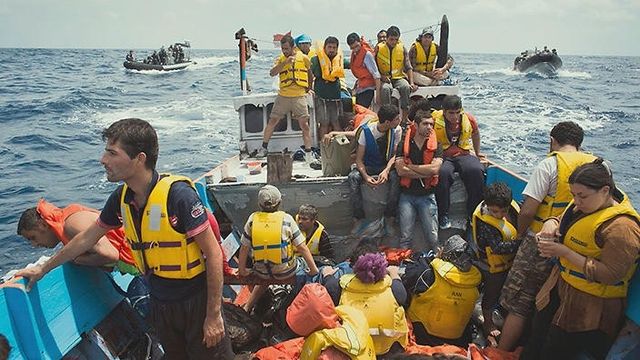 The documentary then details the real situation confronting those seeking asylum in Australia with an overview of Canberra’s offshore detention program, chilling interviews with asylum-seekers and former detention centre employees, along with clandestinely filmed material from the Nauru and Manus Island detention centres.

Social workers, security guards and interpreters, a manager and others, explain the reality of the brutal regime. Their decision to reveal these details is courageous. Under Australia’s Border Force Protection legislation, anyone exposing what goes on inside these concentration camps—including reportage of child sex abuse—can be jailed for two years.

Others interviewed in the 96-minute feature include former camp detainees, who decided to return to Afghanistan, Iran, Lebanon and Sri Lanka, and asylum seekers still trapped in Indonesia and Cambodia.

Everything about the detention centres is designed to dehumanise the asylum-seekers and to send a message to any refugee contemplating sailing to Australia that he or she will be treated worse than criminals and should never enter the country.

As one of the detention centre managers says: “You go from looking after people to saying if you come here we’re going to make it worse than if you stayed where you came from.”

A young social worker, who was told little about her job before being sent to work in the offshore centres, describes the horrendous conditions: “There was sickness, disease, infection and it felt militarised … [a place] where there are children growing up in mouldy, damp-filled tents. They have no space. You have clients saying to you, ‘Please come back; please don’t forget about us; please don’t leave us here.’”

Dr Peter Young, director of mental health services on Nauru and Manus Island, points out that holding children indefinitely is an essential part of the government’s “deterrence policies,” as the camera pans across a photograph of 11 babies in one of the detention centres. These infants, he says, were not feeding properly or gaining weight. “This is what’s considered the price required to ‘stop the boats.’” Australia is the only country in the world that incarcerates the children of asylum seekers.

In one of the many heartbreaking moments in the documentary, social workers detail the terrible psychological toll on children. “You’d see kids banging their heads on walls,” one explains.

An emotional interpreter describes the ecstatic reaction of children when they were finally given dolls and soft toys, after being incarcerated for more than a year. One young Sri Lankan girl cried tears of joy as she rubbed the toy all over her neck and face, the interpreter tells the film.

Pictures of children’s paintings—one of them with the words “children cry blood, sewing lips together for freedom”—and wall graffiti—“welcome to coffin” and “Kill us”—point to the deep despair of those trapped in these hell holes. 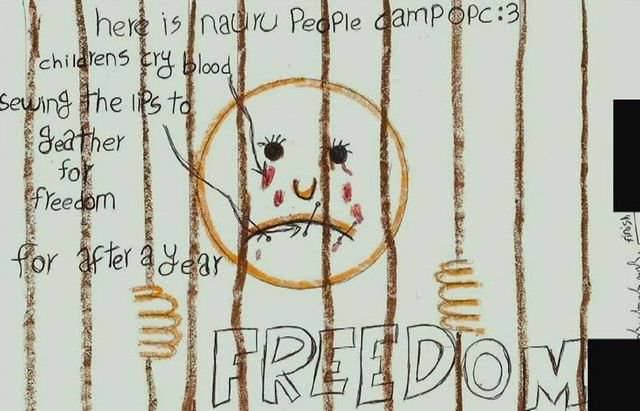 A child refugee's cry for freedom

Martin Appelby, a long-experienced former Australian prisons officer, reveals that he received death threats after reporting the abuse of detainees to senior detention centre officials on Manus Island. He resigned in protest and is still traumatised by his time in the Manus Island detention centre.

Chasing Asylum also features disturbing footage shot during the February 2014 riots on Manus Island, when Iranian Kurd Reza Barati was beaten to death and others seriously injured by security guards. Security guards are recorded joking about shooting detainees. The film also documents the tragic death of 24-year-old Hamid Kehazaei, who died from septicaemia in September 2014, after not being provided proper medical treatment for a cut in his foot.

Orner’s documentary is not without its weaknesses. While it correctly points to—and bluntly condemns—the bi-partisan character of the Liberal-National and Labor governments’ assaults on refugees over the past 15 years, it implies that this originated with the Liberal-National coalition government of Prime Minister John Howard in 2001.

The whipping up of anti-immigrant sentiment and the mandatory detention of refugees arriving in Australia by boat began, however, under the Keating Labor government in 1992. Nor does the film mention that the minority Labor governments, which expanded the Howard government’s repressive offshore refugee program, were kept in power between 2010 and 2013 by the Greens.

Chasing Asylum ends with a short interview with former Liberal Prime Minister Malcolm Fraser who, the audience is told, welcomed 70,000 Vietnamese refugees to Australia during the late 1970s. Orner concludes by dedicating her film to Fraser, the clear implication that his government represented some Australian ‘golden age’ in the treatment of refugees.

In fact, Fraser, who was minister for defence from 1969–71 at the height of Australia’s involvement in the US-led invasion of Vietnam, tried to stop the arrival of Vietnamese refugees arriving by boat after he became prime minister in 1975.

During the 1977 federal election, Fraser told the media that “some of the Vietnamese refugees who have landed in Australia [by boat] might have to be deported.” It was only in 1978, after intense pressure from the US, that Fraser agreed to accept more Vietnamese asylum seekers. The overwhelming majority of Vietnamese refugees were admitted to Australia only after they had spent years in South East Asian refugee camps.

Notwithstanding these significant political omissions, Chasing Asylum is an emotionally powerful and vigorous exposure of Canberra’s offshore detention regime and the destructive human toll wrought on its victims.

Orner’s documentary, which has been rightly nominated for an Australian Academy of Cinema and Television Arts Award, is a valuable contribution to the fight against these anti-democratic and deeply inhumane policies. Whilst the major cinema chains are not showing Chasing Asylum, the details of current screenings, as well as arrangements for special bookings or non-theatrical community showings, are available here. It deserves the widest audience.

The callous and criminal treatment of refugees
[17 June 2015]