“War is never the solution”

Report on the SEP’s election campaign in Berlin

The Partei für Soziale Gleichheit (Socialist Equality Party of Germany, PSG) is placing the fight against war at the center of its campaign for the Berlin House of Representatives. The party is intervening in the elections with a state-wide list of candidates as well as several direct candidates in local constituencies. The PSG is the only party which has put forward an election program that answers the growing threat of war.

The response to the campaign has been strong. Volunteers report lively discussions wherever they go. Many people have expressed their concern about the expansion of the military, crisis and war—all questions which overshadow local issues.

The Berlin elections are taking place in the midst of a deep social crisis. In recent months, the coalition led by Berlin Mayor Michael Müller (Social Democratic Party, SPD) and Interior Senator Frank Henkel (Christian Democratic Union, CDU) has launched its own campaign of law-and-order and carried out massive social assaults. The effects of privatization have been especially severe in the housing market and the health care industry. In their treatment of refugees, one can see the kinds of attacks the government is preparing for the entire working population.

At the Jobcentre in the Tempelhof district of Berlin, the question of war is a major topic of discussion. Here one quickly gets a sense of the difficult situation facing refugees. Many who come here have escaped the Syrian war and are now seeking to make a life for themselves in Berlin. Two young men from Syria spoke in support of the PSG’s fight against war. “It would be great if people came together to stop the war,” said Sahin, a young mechanic from Aleppo. His friend, a medical student from Damascus, added, “Every day I wish I was back at my university in Damascus.” 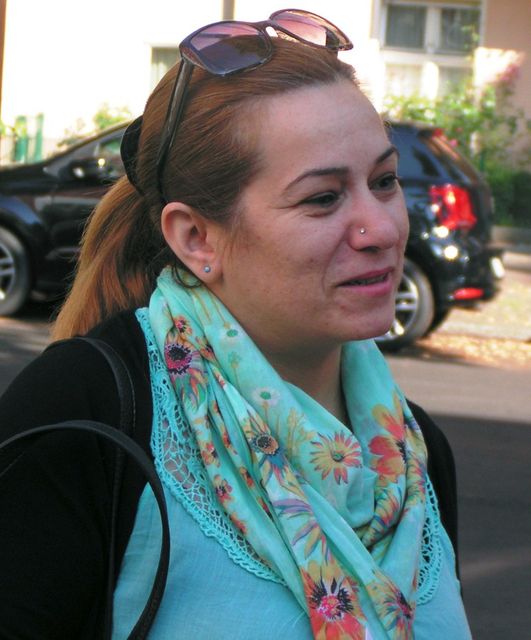 Simaw was a primary school teacher in Aleppo and has lived in Germany for three years now. Her husband made his escape to Germany more than four years ago, shortly after the outbreak of the civil war. During this time, Simaw stayed in Turkey for a year with their three children. “We’ve been very lucky,” she said. “I didn’t dare travel across the sea with three children. I would have been too fearful of that. But it was difficult for us in Turkey. Everything was expensive and I wasn’t allowed to work. We had to pay more than 200 euros each month for rent alone, then you have all kinds of other expenses. I sold all of our valuables. When my husband was finally granted asylum, we were able to enter Germany legally.”

“War is a terrible thing,” said Simaw. “My brother still lives in Aleppo under difficult conditions and my mother lives in Lebanon. My brother can’t come to us because the borders are completely sealed now. We’ve all been torn apart. Now I just hope to get further training so that I can work. The worst thing is not having a job.” 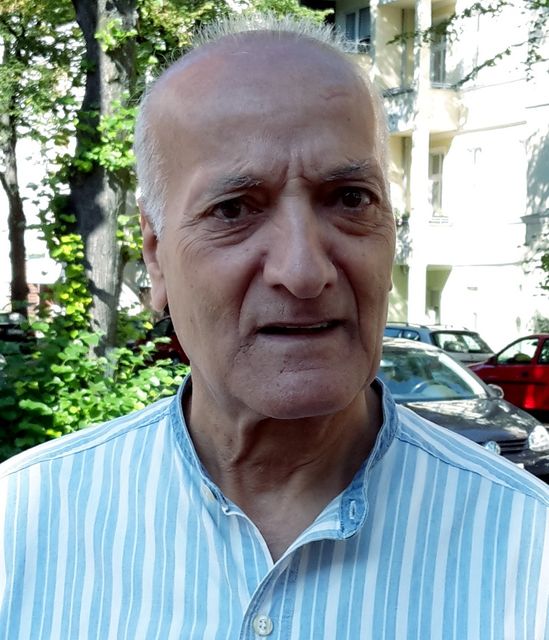 An older worker named Mohamed agreed that the cause of war is to be found in the capitalist profit system. He said: “It is the capitalists and their politicians who wage wars for power and raw materials and not ordinary people. I am generally against war and building up the military. It would be much wiser if one took all the money and energy used for that to build new houses and apartments for people.”

“War does not belong in this world anymore at all!” added Erol. “In the end, it’s all the same whether a million people or a single person gets shot down. Any one person who has to die in a war is too many.” In response to the elections, he said: “A politician would only be acceptable to me if he genuinely fought for peace.”

At the employment offices, the social misery caused by decades of social cuts in Berlin is easily seen. Here one can meet hundreds of people who only make ends meet with the greatest difficulty.

One of them is Christina, a German studies and sociology student and single mother in her mid-20s, who pays for school with a mini job at a supermarket. She was very impressed when she listened to campaign workers discuss the building of a revolutionary party and especially the International Youth and Students for Social Equality (IYSSE). “That’s a worthy cause,” she said. “It is crucial that a youth and student organization be built which is organized internationally and advocates anti-capitalist politics.” Christina worried that the possibility that war in the Middle East could escalate is real and extremely dangerous. 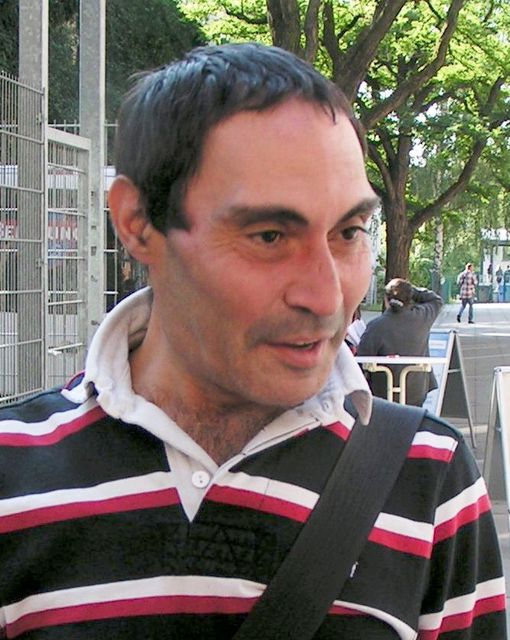 Salvatore is angry about war and the money spent by politicians to build up the military. “Then they always say there’s no money!” said Salvatore, “My problem is Hartz IV has been paying my rent and now Hartz IV is over but my apartment is still there!” At the moment, Salvatore has a mini job in a kitchen, but wants to run his own restaurant. “Really good Italian food, that would be perfect,” he said, “Instead, I’ve been living for more than six months on 13 euros a day, and I tell you that’s not easy in Berlin.”

Salvatore said he has already received his notification for the Berlin elections, but is more familiar with politics in Italy. In a discussion on the Left party, Salvatore said that in Italy the entire pseudo-left supported the Renzi government but now they’re going to war with Libya again. “War is never the solution!” said Salvatore with conviction. “Any political and diplomatic solution that avoids war is better than bombings and mass killings. Look at Syria, the people there live in fear of death every day.” Salvatore was encouraged to hear that the PSG is taking up the fight against war and pledged to vote for the party. 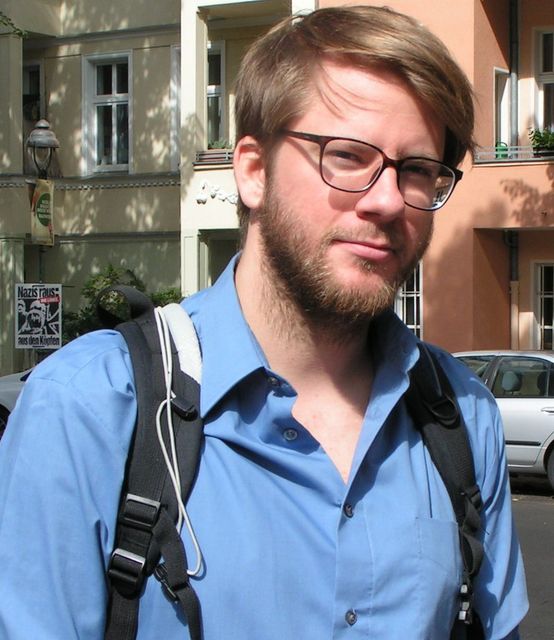 Johannes, a social education worker, said suddenly: “A huge amount of money will be spent on the Bundeswehr and Germany is also an exporter of weapons. One really can’t be proud of that.” Johannes expects nothing from the elections, even though he wants things to change. “One has to invest money in the social sector and not in arms for the military.”

The discussion turned repeatedly to the Left Party, which co-governed the Berlin Senate from 2001 to 2011. Their politics were in some instances even more reactionary than the other parties. They managed to carry out social cuts that provoked open opposition from other parties. Disillusioned, many responded by turning away from politics.

“The Left Party is also no different than all the other parties,” said Alexander, a young man who would like to work as a nurse. He insisted that he does not vote. “I stay out of it completely. And I know a lot of people, including educated people, who do the same.”

Alexander witnessed how the hospitals were privatized in Berlin and taken over by the private hospital company Vivantes. “The Left Party didn’t prevent it either,” he said. “So much is promised, but in the end nothing changes, or if it does it is in the interest of the economy. Germany is one of the most capitalist countries there are.”

Gerke said she was disappointed by all of the parties represented in the Senate. “I go vote, but I make my ballot invalid to express my opposition,” she said. When told that this alone would change nothing and that it was necessary to unite the working majority of the population to give them a voice, Gerke said: “It’s true that my ballot protest goes unheard. I don’t want to belong to the so-called ‘silent majority’ by doing that.”

Campaign workers frequently discussed political tendencies that presented themselves as supposedly “left” and progressive but ultimately supported the Left Party. A young woman from Spain discussed her experiences with Podemos, a Spanish tendency comparable to the Left Party in Germany and Syriza in Greece.

Sandra, in her mid-30s, originally from Valencia, Spain, has lived in Berlin for one year. She was active in the Spanish “Indignados” protests in April and May of 2011 but grew completely disillusioned with Podemos. She said: “I’m finished with Podemos. They always made a lot of promises, but kept none of them.” Pablo Iglesias, the political leader of Podemos, was earlier an active supporter of Hugo Chavez and Fidel Castro, two bourgeois nationalists.

Campaigners explained that many politicians of the pseudo-left originated in the Stalinist camp. To this, Sandra said: “I am fundamentally opposed to Stalinism. One can put no trust whatsoever in these organizations [The Left Party, Podemos and Syriza].” Sandra said she wanted to come to the PSG campaign meeting on August 18 in Schöneberg to learn more about the Fourth International.

Victor, a student, sat in front of the American Memorial Library, and read carefully the PSG’s election platform. Finally he approached the party’s book table and said he was pleasantly surprised to have discovered the PSG. He had already heard about the IYSSE’s campaign “Scholarship or War Propaganda” at Humboldt University. Münkler-Watch had reported on a lecture that one of his friends had also attended. “At first, we thought it was somewhat exaggerated, but now Münkler’s arguments seem genuinely problematic,” Victor said. 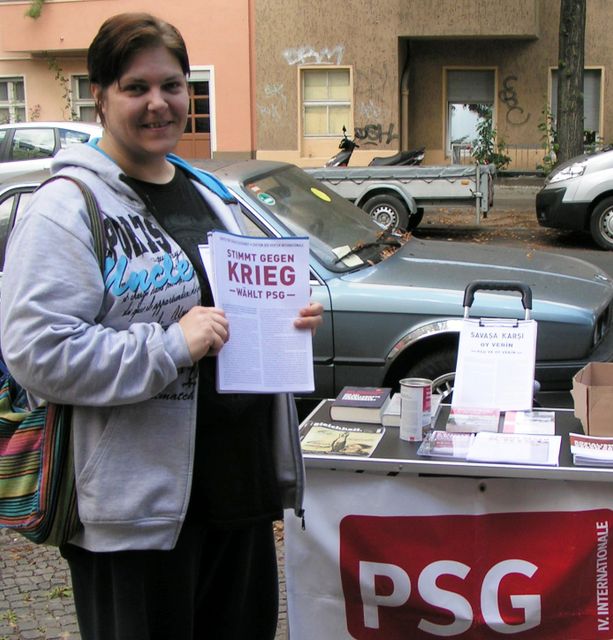 Diana had spent several years in the US and supported the campaign of Bernie Sanders while she was there. She described her experiences: “Today we live in a merciless system of two classes. Now you only have the alternatives of Trump or Hillary over there. Trump is nothing more than America’s Hitler, and Hillary has lied to people from beginning to end.” She noted that “in the end the Clinton campaign only used [Sanders] to contain oppositional voices.”

Diana supports the anti-war campaign of the PSG and took flyers and other material for her daughter. She said that she makes a point to call herself a “citizen of the world” to take a stand against nationalism.

Diana and several others said they wanted to read the party’s election statement more carefully and promised to come to the election meeting in Schöneberg on Thursday evening to learn more about the program of the PSG and the Fourth International.