Dining hall workers at Harvard University went on strike early Wednesday after union workers and university representatives failed to reach an agreement over a new contract. The strike by Harvard University Dining Services (HUDS) workers is the first since 1983, and the first ever during the academic year. 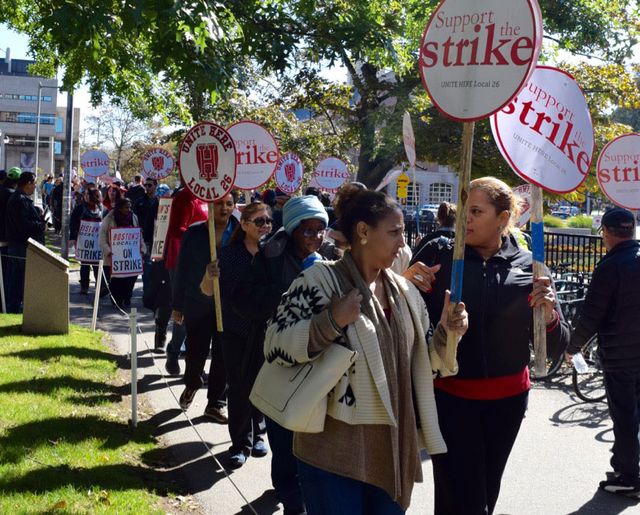 Striking workers gathered at more than a dozen picket locations at the Harvard campus in Cambridge, Massachusetts Wednesday morning and were joined by some students. Meal service was modified at dining locations, with frozen food, stockpiled by the university in preparation for the strike, overloading dining hall freezers.

The main issues in the strike are health insurance benefits and wages. The prestigious and heavily endowed university is demanding increased health care costs and offering paltry wages to the 750 workers across the Harvard system represented by UNITE HERE Local 26. Workers’ previous contract expired in June, but had been extended through September 30.

In a prepared statement, Harvard said it had proposed a 10 percent increase in average hourly wages from $21.89 to $24.08 over five years. The majority of HUDS workers are only employed—and paid—during the school year.

Nearly half of the workers earn less than $35,000 a year, a salary deemed insufficient to support more than one person in Boston, according to the MIT Living Wage Calculator. Many HUDS workers have worked for Harvard for decades. The university’s offer to provide summer stipends to employees was rejected by union negotiators.

Harvard is demanding huge increases in both health care premiums and out-of-pocket costs. According to an analysis of Harvard’s health insurance proposal prepared by members of the Harvard Medical School Class of 2019, most HUDS workers would be better off if they were offered no health coverage from the university and obtained insurance through the Massachusetts Health Connector, the state’s version of Obamacare.

Under Harvard’s proposal, a worker in a three-member household earning $30,000 would be required to contribute a premium of $233 a month, while the Massachusetts exchange has plans that require no premium at all. Co-pays, deductibles and out-of-pocket maximum costs would also be higher under the Harvard proposal.

An analysis by the Harvard Medical School faculty and the World Health Organization has defined any health care spending over 10 percent of annual income as a catastrophic expenditure. The university’s health proposal would place HUDS workers perilously close to qualifying for this designation.

In an opinion piece on the eve of the strike, Harvard Medical School students Micah Johnson and Sanjay Kishore wrote: “As physicians in training, we cannot stand by as the world’s richest university forces its most vulnerable employees to choose between dinner and a doctor’s visit.” 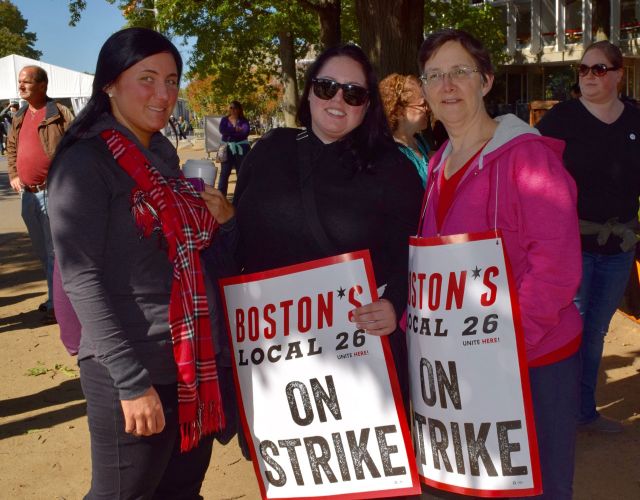 Susan Olsen has worked in Harvard dining services for 20 years. Three of her children are also HUDS workers. “We actually are trying to get the same benefits as we have right now for health insurance,” Olsen told the WSWS. “What they have proposed is that we don’t have health insurance when we’re off, which is a least four-and-a-half months a year, when school is not in session.

“We would have to pay more money for doctor visits and all that,” she said. “Now for most people it’s about $15-20 per copay. Under their proposal it will be up to $100 each copay. And then we wouldn’t be covered in the summertime.”

Olsen said that workers without coverage in the summer would be in violation of the Obamacare requirement that individuals and families obtain insurance or pay a penalty. “And then we would have to pay extra on our taxes,” she explained.

“There’s only about 5 percent of employees that work during the summertime, because they have summer school programs. The other people either have to fend for themselves, use their vacation time, or get another job. It’s about their bottom line.”

Harvard University’s endowment is $35.76 billion, the highest in the nation. Distributions from the endowment support 35 percent of the university’s $4.5 billion operating budget. Providing a livable wage and high-quality health insurance coverage to the HUDS workers would constitute a negligible dent in this massive hoard of wealth.