Harvard University Dining Services (HUDS) workers continued to picket the Harvard University campus on Saturday in what is their first strike since 1983. Around 100 strikers and supporters marched through Harvard Square in Cambridge, Massachusetts, culminating in a picket of about 150 outside Harvard Business School.

Union and management negotiators met Friday for the 21st session and were set to meet again Saturday, with university spokeswoman Tania deLuzuriaga telling the Harvard Crimson, the student newspaper, that talks ended without a settlement on Friday.

At the center of the strike are health insurance benefits and wages. In an editorial supporting the dining hall workers in the run-up to the strike, the Crimson said that under the current health care plan, HUDS workers pay $40 for emergency room medical care and $15 or less for nearly every other service. Under Harvard’s new proposal an emergency room visit would rise from $40 to $100 and inpatient hospital services as well as outpatient services would go from zero to $100. 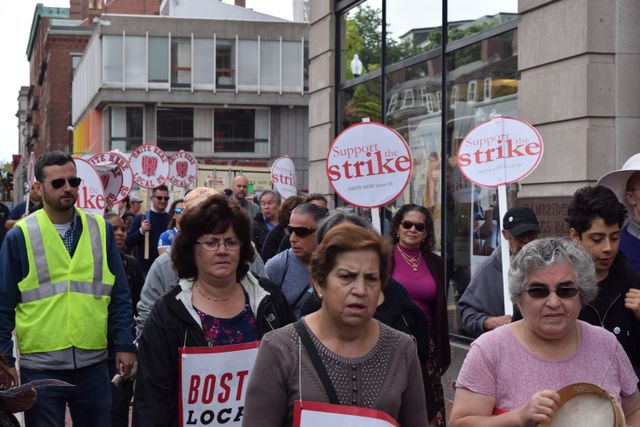 Harvard has proposed a 10 percent increase in average hourly pay from $21.89 to $24.08 over the five years of a new contract. The majority of HUDS workers are paid only during the school year, with nearly half earning less than $35,000 a year. Boston has been ranked the third most expensive city in the US, behind only San Francisco and New York City.

Reporters from the World Socialist Web Site spoke to strikers during Saturday’s picket and demonstration.

Jaime has worked for Harvard for nine years as cook at one of the 13 dining halls. He works 40 hours a week as a full-time employee. Asked what he thought about the strike, he said, “I think it is great because we are fighting for our right to better health care. I think we are winning. There are negotiations today at 1 o’clock and it’s looking better on our side. They want us to pay more out of pocket for our health insurance. We want to keep the same package as in the previous contract so there is no increase.”

Jaime said management knew the strike was coming and didn’t do anything about it, “so we just went ahead with it. We want a five-year contract, but that’s not even the issue. That has been resolved. It is health care and wages that we are fighting for.

“The contract expired in May and it has been extended since then so we can negotiate. It has been 21 times already in negotiations and the extension ended August 17. They weren’t budging at all so we just went with a strike. I don’t really see the point of why Harvard is doing this. It’s obvious they have plenty of money and we shouldn’t have to pay for it because they have a multibillion-dollar endowment, so why put more charges on us?”

As the WSWS has reported, Harvard University’s endowment is $35.76 billion, the highest in the nation.

Reporters spoke to Mirabella Pappis and her husband Christopher outside Harvard Yard. Mirabella said, “We’re out here fighting the insurance that they’re putting on us. The insurance cost is so high that we can’t even afford it. You know, it’s our health care that we’re fighting for. We shouldn’t be fighting for health care at Harvard University, the richest university in the world.”

Christopher added, “When you look at it, it’s all business. You’re on one business side or the other side, and obviously they want to make cuts. I don’t know at the end of the day where the money goes to, but whenever you can cut back … if you’re a business and you can save money and cut back, it’s a good thing. So that’s their fight. We showed our worth to the university, and we’re not asking for much. We’re asking for what we already have, basically, and not to change. They want to change our health care.”

Mirabella pointed out that the insurance they were being offered was the same plan that was rejected by faculty members making $70,000 and up. “We make $32,000 a year,” she said. “They fought it because they said it was too expensive for them. How are we going afford something? It’s impossible. The medical students came and showed them a draft and said you’re not humans if you’re going to be doing this to these people. And they said, “What do you know, you take care of the sick.” They’re so ignorant.” 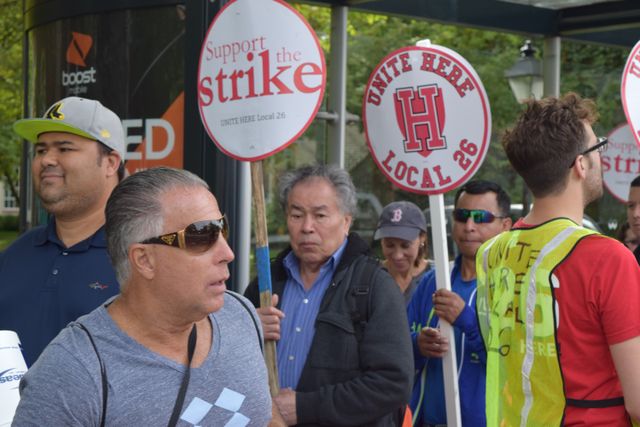 Christopher raised the issue of reports that the hourly wage they make is higher than for many other jobs. “The wage is not a bad wage per se,” he said, but pointed out that it is not for 12 months of the year. “It’s eight months, sometimes seven and a half,” he said. “So whatever your wage is, your hourly wage, it’s not going for 12 months out of the year.

“That’s four months out of the year you’re not getting anything. So that wage now, it kind of shrinks a bit, you know what I’m saying? The majority of the workers are laid off. That’s three months with no pay coming in, that’s a challenge. We’ll try to work a lot of overtime during the year to protect ourselves, but even the overtime, it only spreads so far.”

Mirabella added, “People depend on other family members for food, other people lose their homes. It’s been very hard on us. So for them to even think that they could put this on us now, it’s just not right.” She added that the strikers have received support from the students and among the faculty.

The Crimson reported Sunday, “Faculty of Arts and Sciences Dean of Administration and Finance Leslie A. Kirwan sent an email to FAS department administrators requesting exempt staff to aid dining hall managers as the strike continues.”

Kerwin’s email stated: “The dining halls are being staffed by HUDS managers, supplemented by Harvard colleagues from around the University who are pitching in to help with a shift or two. If you, or exempt staff in your department, are able to suspend some of your regular duties and instead lend a hand to HUDS, I know they would be most grateful.”

Both Christopher and Mirabella were concerned about the use of temporary agency workers. Christopher said he was “a little neutral” when it came to the temp agency. “If you don’t work and you go to a temp agency for work, I see a lot of it so I can’t fault them, because like anyone they want work.

Mirabella added, “The faculty members and the deans had meetings yesterday. They had to shut down a couple of dining halls because students were complaining. They didn’t feel comfortable with these people, they weren’t properly answered when they asked questions about dietary needs, and they got it shut down. They shut down dining halls. Every day. Yesterday they closed a couple more, and we’re out here fighting for something that should be a given.”

With no agreement reached in talks on Saturday, the strike looks set to continue through next week.