Concerns increased this week over food safety at Harvard University in Cambridge, Massachusetts, as a strike by food service workers has closed dining facilities across the campus. Those that remain open are being run by unskilled temporary workers.

The Fly-By take-out facility in the basement of Annenberg Hall had to temporarily close Thursday due to meals not being “delivered at safe temperatures,” according to the university spokesperson Tania deLuzuriaga.

The quick to-go lunch option for upperclassmen is a popular choice for students with tight class schedules. With the strike shutting down other options, more and more students rely on the Fly-By than would ordinarily do so. 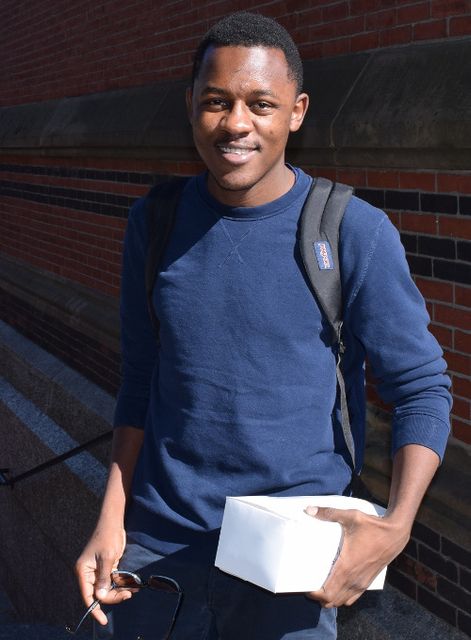 Harvard student Samuel was leaving the Fly-By dining hall where he had picked up his box lunch. “I feel we’re really missing out with the community in the dining halls where we can sit down and talk with the students and also the workers,” he told the World Socialist Web Site.

Referring to the take-out “Fly-By” food, he said he didn’t like it. “I think that what the workers are fighting for should be able to be worked out. Harvard has the money to do that.”

Alan, also a Harvard student, didn’t really mind the take-out meals, as he often eats on the run due to his busy class schedule. “I don’t really know much about what the workers are fighting for,” he said, “but I support them.” Asked about the quality of the food, he said he had seen some pictures of undercooked chicken and it didn’t look nice. 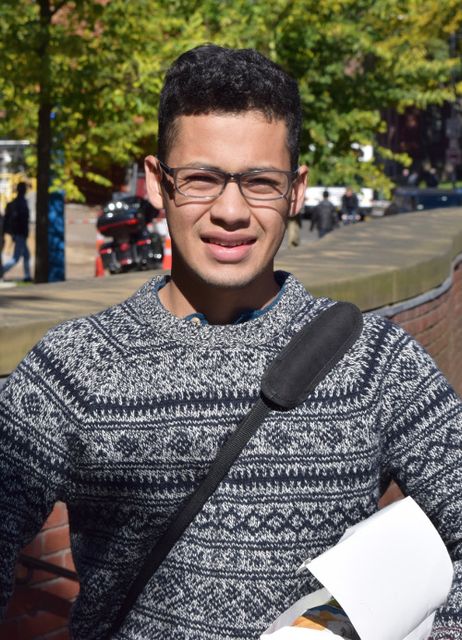 While deLuzuriaga claims that Harvard’s “commitment to food safety remains paramount” and that professionals oversee the food preparation and cooking processes, students have raised concerns about the food quality, with some reporting undercooked meals at the dining halls that remain open.

According to the Crimson, “Marcus K. Granderson ’18 and Nader Shayegh ’18 both said they were served raw chicken. Rena Lyon ’18, a vegetarian, said she found pieces of meat in banana bread pudding. Cara R. Jacobson ’18, who has Celiac disease and cannot eat gluten, said getting food during the strike has been “pretty difficult.”

Pickets were out in force again Friday as there appears to be no movement on the central question of health care and wages and negotiations remain deadlocked. A statement issued Tuesday from Marilyn Hausammann, the vice president of Human Resources at Harvard, attempts to present Harvard as the voice of reason in the dispute.

Hausammann states that Harvard would “raise the average rate for dining workers to $24.08 per hour by the end of the contract,” claiming this is “well in excess of the average hourly wage for Local 26 dining service workers elsewhere in eastern Massachusetts, $14.61 for general service employees.”

The letter also points to the paltry living wage of $15.04 an hour set by the City of Cambridge and goes on to calculate that, based on a 37.5 hour week at $21.89 an hour, a Harvard University Dining Service (HUDS) worker working 38 hours a week can earn $31,193 per year versus the $29,328 per year for 52 weeks with an hourly rate at the city’s “living wage.” Deliberately missing from this comparison is the fact that many HUDS workers don’t work 38 hours a week and earn well below the $31,000 a year average cited in the letter. 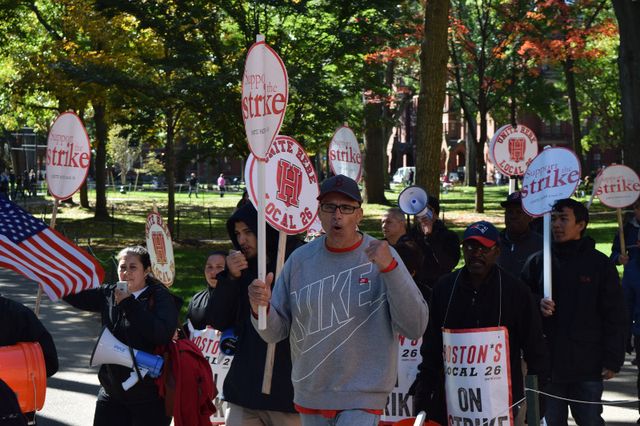 Strikers marcing through Harvard Yard to join the picket line

Workers are demanding $35,000 to compensate for the time they are unable to work due to campus dining rooms closing outside of the academic year. Hausammann writes that Harvard sought to address this when the university “proposed enabling members to draw unemployment benefits temporarily—an idea originally supported by the Union.”

The letter gives no further details on this proposal, but a page on the Harvard Human Resources web site states: “Although dining positions are nine or 10-month positions, they are benefits eligible for 12 months.” It is unclear whether the proposal planned to change this by not paying benefits for the months not worked.

The WSWS spoke with three women who had come across the strike as they were walking through Harvard Yard. Laura Harrelson, who was visiting from Utah, said, “I’ve never crossed a picket line, even though I’ve haven’t worked union in about 30 years.”

We explained how HUDS workers were fighting to maintain their health care, and that Harvard was trying to raise their copays to as high as $100 a year. “And they don’t work all year?” she asked. “Oh my gosh, you’re going to make me cry.”

Melissa Costa, visiting from Kentucky, said, “That’s what happened to me when I worked at Starbucks, so I’m with them.”

Laura added, “How can a school like Harvard, which I assume gets lots of money from their students, how are they not able to pay their workers? That’s crazy!” 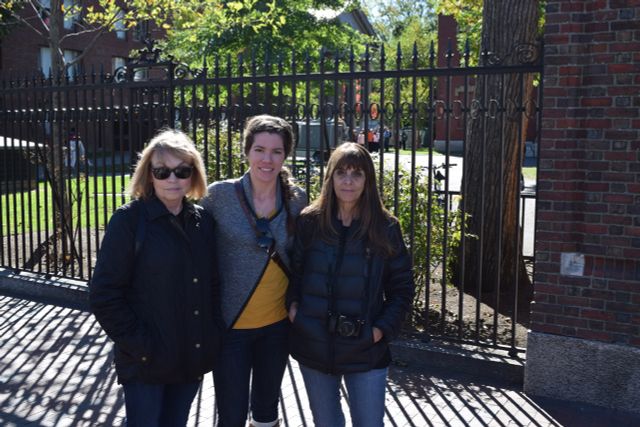 Dori Weinkauf from Boston said, “I was just speaking to that man over there and he said that this is their second week on strike.”

Strikers Kathy Walsh and Cathy Marks explained that HUDS workers up to now have had Harvard Pilgrim (HMO) insurance, and that Harvard now wants to switch the workers to insurance from UNITE HERE Local 26, the union representing workers.

Cathy said, “The problem with the union plan is you’re not covered for the months you don’t work.”

“The way it currently works,” Kathy said, “if we pay a little extra every week, then we’re carried through the summer.” 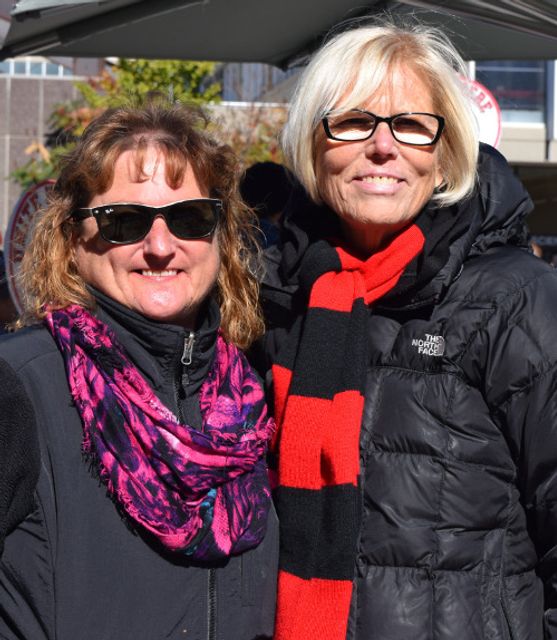 Asked what workers would do without insurance during the months they don’t work, Kathy said, “That’s what we’d like to know. They’re really holding out on us.”

“And we want a good pay raise,” Cathy said. “That’s the other thing we’re fighting for.

“I’ve worked here 27 years, and she’s been here 30. We’ve never gotten summer jobs. Some people do. But when you’re hired, it’s a nine-month position only. You know that.”

“But now it’s more like eight months, because you’re off January as well,” Kathy said.

They explained that you have to be working to be insured, so those people without other insurance through a family member or another job would be in violation of the Obamacare requirement to have health insurance.

“There are a lot of couples who work here, too, husband and wife as well,” Cathy said. “And they rely on each other’s paycheck.”

“And the kids are paying big money for this school,” Kathy said, “Big money,”

Harvard insists there can be no question of utilizing even a fraction of the university’s massive $35.67 billion endowment to settle the workers’ demands, even as a group of alumni has pledged to cease donations to the university and instead direct monies to the union’s Hardship Fund.

For its part, UNITE HERE and the AFL-CIO and Change to Win labor federations have kept the striking workers isolated and provided only meager strike benefits. UNITE HERE Local 26 is allied with Republican Governor Charlie Baker and on its web site boasts that the governor recently provided a $225,000 grant to fund the building of a joint labor-management training center for hotel services.