In 1957, Conservative Party Prime Minister Harold Macmillan informed Britain’s population, “You’ve never had it so good.” Wartime rationing had ceased, and the welfare state now supposedly cared for everyone, “from the cradle to the grave.” 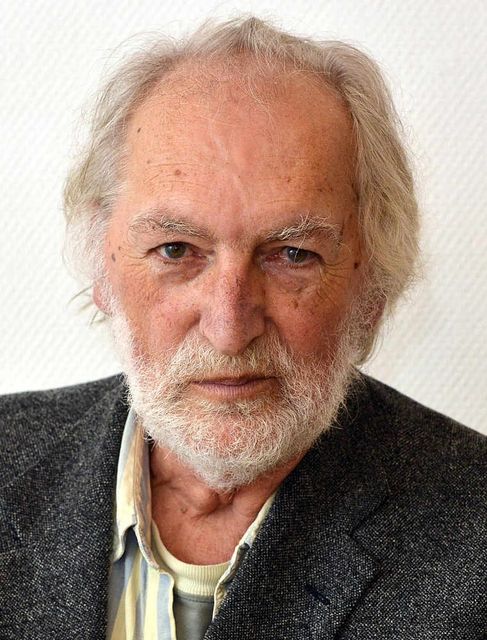 The 1950s then gave way to the so-called Swinging Sixties. But 3 million people in the UK were still living in slums reminiscent of the Victorian era.

The made-for-BBC docudrama directed by Ken Loach, Cathy Come Home (1966), concerning the plight of a young homeless family, shone a spotlight on this crisis. The film, which in 2000 was voted number two on a list of the “100 Greatest British Television Programmes”, became the catalyst for the birth, in 1966, of the housing and homeless charity, Shelter.

Shelter commissioned photographer Nick Hedges to capture images, over a period of three years from 1968, of some of the poorest neighbourhoods in the UK, to help expose the appalling state of housing that was “home” to large sections of the working class. Hedges took photos in London, Birmingham, Manchester, Liverpool, Leeds, Bradford, Sheffield, Newcastle, Glasgow and other locations. 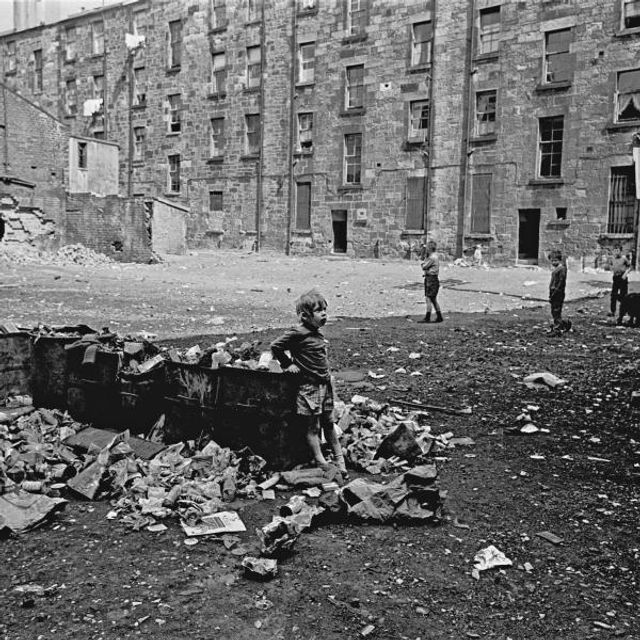 To mark 50 years since its founding, Shelter has been holding a series of exhibitions in UK cities, including Sheffield, Birmingham and Manchester, displaying the pictures taken by Hedges. These photographs titled “Make Life Worth Living” had not been seen by the public until 2014, to protect the anonymity of their subjects. They were first displayed at London’s Science Museum.

In Hedges’s words, what he saw “shocked me to the core.” Nevertheless, there is a haunting beauty about these mainly black-and-white images. In the midst of all the squalor, Hedges shows that the families and their neighbours care deeply about and are fiercely protective of each other.

He manages to capture his subjects in almost classical poses, thus conveying to the viewer that these people really matter.

The photos, seen by more than 1,000 people in Manchester over three days, have a powerful resonance today. As the Hub Manager of Shelter Greater Manchester, John Ryan, told the World Socialist Web Site, “The main response we’ve had to the exhibition is that people are still living in similar conditions, with damp, disrepair, overcrowding and unaffordability.”

“Thousands of apartments are being built, but who can afford them?” he continued. “With the bedroom tax and the introduction of universal credit, then benefits get mixed up and it’s a downward spiral from indebtedness to being homeless.” 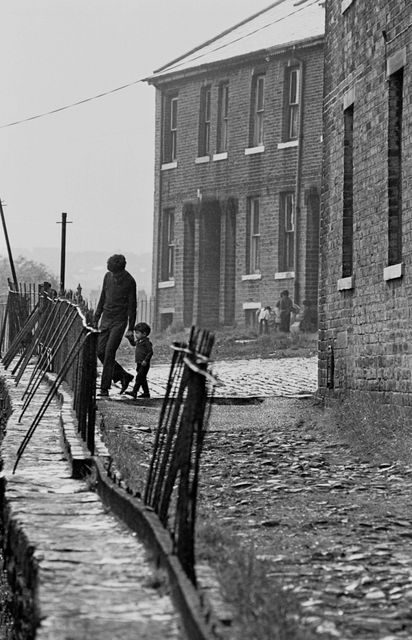 Hedges echoed these sentiments. Speaking about the current exhibition of his work, he said, “When I was commissioned by Shelter to take these photographs. ... I never imagined that decades later they would still have such impact.” He continued, “It’s heart-breaking to know that the conditions some people have to live in today aren’t a million miles away from the photos I took all those years ago. A home should be a place of safety and security, but too many families are having to live without.”

Some photographs in the exhibition are long shots that reveal the extent of the dilapidation in the inner cities—for example, a frame of the notorious tenements in Glasgow’s Gorbals area. Windows without glass gape black onto cobbled streets filled with rubble and rubbish.

Others are more intimate portraits of families struggling to survive in these conditions.

One beautiful composition by Hedges is suggestive of a painting by the Salford artist L. S Lowry, famed for his scenes of England’s industrial northwest. It is of a terraced street in smoggy Bradford, in West Yorkshire. A father holds his child by the hand. Their faces are invisible, with his thin figure mirrored by the broken railings that dominate the foreground. 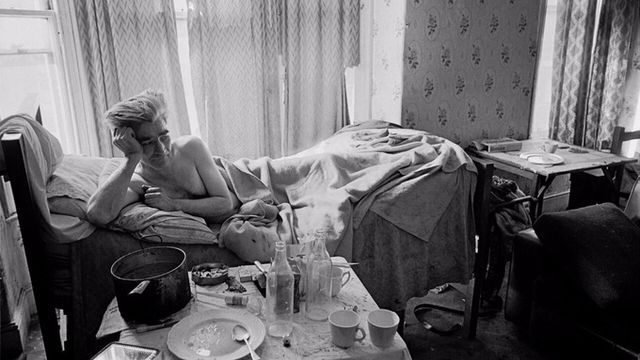 Each photograph tells a story.

A gentleman sporting a fashionable quiff is of indeterminate age, most likely old before his time. His home is a single room. He reclines in the pose of a Renaissance nude, surrounded by an ashtray full of cigarette stubs, an unwashed plate with the remains of a meal, and empty milk bottles of the sterilised variety––indicative of a lack of a refrigerator on the premises. He is deep in contemplation. 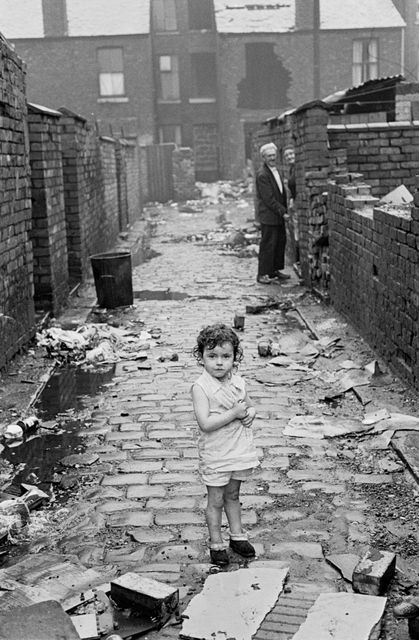 Child at the end of an alleyway [Photograph: Nick Hedges for Shelter]

“Child at the end of an alleyway” was taken in Manchester in 1972. The little girl’s “playground” is a rubbish-strewn street surrounded by dilapidated terraces. This is 30 years after the war ended but looks like a war zone. A toothless old couple are watching her. Who is she? What has become of her?

Shelter has launched an appeal to the subjects of the photographs to come forward if they recognise themselves or anyone else. Said Hedges, “Of the children I photographed, I often wonder what happened to them, if they went on to lead happy and healthy lives.”

Hedges treats his subjects with respect and compassion. When he photographs a mother with babe in arms, living in a damp cellar, one is reminded of the Madonna and child painted by an old master. This Madonna, however, is in despair. She had no gas, no electricity, no hot water, no bathroom. Her cooking was done on the fire in the living room. 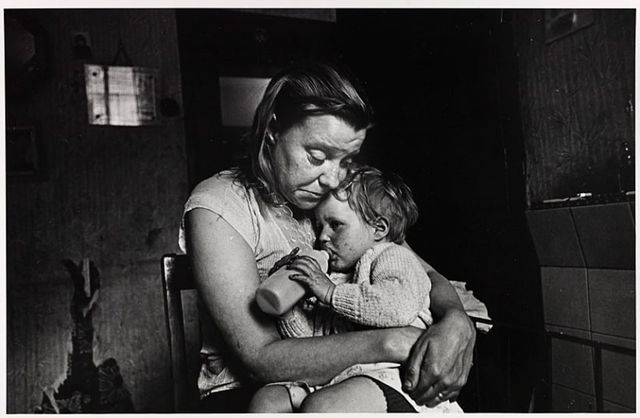 In the picture below, taken in Birmingham in 1970, a young girl holds her baby sister protectively, in a “dark and squalid room”. Her brand-new dress, probably for best occasions, contrasts with the peeling wallpaper. 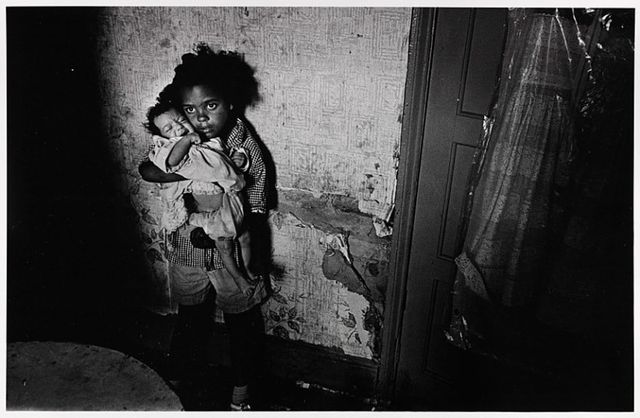 These photographs draw the viewer in. In one picture, a man stands at the fireplace in the single room he shares with his wife and baby. His wife tends to the baby on her lap. On closer inspection, one discerns he is staring past his family, the weight of the world on his young shoulders.

The families portrayed are living in severe poverty. Tables without a tablecloth are covered with newspaper, a fireplace is also covered with newspaper to draw the fire, a practice that would be considered a violation of health and safety today. One lady wears her coat in the house, as there would have been no heating.

It is obvious that some single-room homes are in the cellars of houses. Many beds in one room indicate overcrowding, which is a breeding ground for tuberculosis. 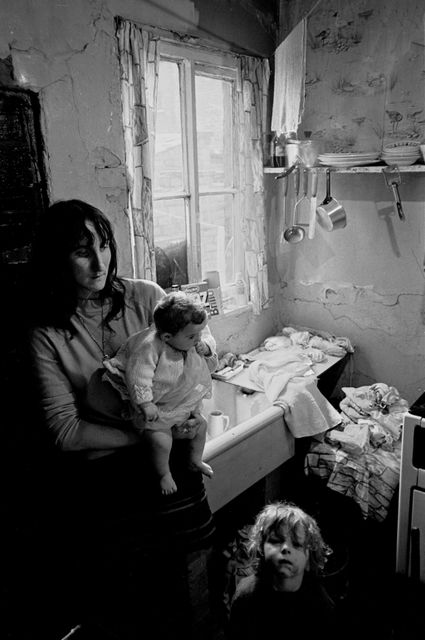 A mother and her children, Salford, 1971 [Photograph: Nick Hedges for Shelter]

But despite the grim conditions, it is clear that the occupants have made an effort to keep their homes clean. In one picture, light falls on clean washing, pots and pans hang spotlessly clean, yet plaster hangs off the walls. The young woman in the frame, prematurely aged, stands in the shadows.

In the photograph below, taken in the working class inner-city area of Balsall Heath in Birmingham, a child is seen playing in the doorway of a bedroom with a broken floor. The child adopts an attitude of defiance as she steps out of the dilapidated room and appears to climb out of the squalor.

Born in Bromsgrove, Worcestershire, in 1943, Hedges studied photography at Birmingham College of Art from 1965 to 1968. His final project as a student was an exhibition on bad housing in Birmingham. 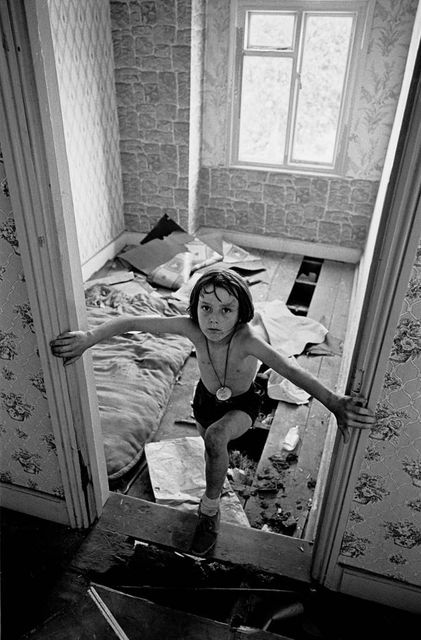 As well as the commission for Shelter, Hedges has produced a two-year photographic documentation of factory work in the Midlands and a study of the fishing industry in the North East.

He is currently working on a project called “Conurbation” with the Centre for Urban and Regional Studies at Birmingham University.

The pictures in the exhibition were taken in the last days of the Harold Wilson-led 1964-1970 Labour government, and the first years of the succeeding Tory government under Edward Heath.

Although the post-war Labour government enacted a programme of mass council house building, many tenants in the 1950s and 1960s still occupied slums and were at the mercy of unscrupulous landlords. The term “Rachmanism” was coined in this period after slum landlord Peter Rachman, who operated in the Notting Hill area of London.

The final part of the exhibition, “Then and Now”, compares housing conditions in the early 1970s with the present day. This includes detailed descriptions of the squalid housing conditions that many people face today. It includes a photo of the “flea-infested” home of a woman, Sandrine, which has no toilet. Sandrine has to sleep across chairs.

The housing crisis today is if anything more acute than it was in the late 1960s and 1970s.

In Hedges’s words, “Adequate housing is the basis of a civilised urban society. The failure of successive governments to provide for it is a sad mark of society’s inaction. The photographs should allow us to celebrate progress, yet all they can do is haunt us with a sense of failure.”

The slums of yesteryear have been demolished, but today many people still live in intolerable, overcrowded conditions. Every few yards on the main thoroughfares of every city and town, a person condemned to homelessness can be found.

According to government figures published by the Department for Communities and Local Government, in the period from April to June 2016, there were 15,170 families classed as statutorily homeless—i.e., classed as unintentionally homeless with priority need such as having children. This figure was an increase of 3 percent from the previous quarter, and 10 percent from the same period last year.

The number of families in temporary accommodation is also rising, up 9 percent since last year and 52 percent since 2010, to 73,120 in June of this year.

In the autumn of 2015, it was estimated that 3,569 people were sleeping rough. And for every individual living on the streets, two or three people are thought to be “sofa surfing”.

In 1979, 42 percent of Britons lived in council housing. The figure today is just under 8 percent, after former Tory prime minister Margaret Thatcher introduced the right to buy council housing. This was continued under the 1997-2010 Labour government. Local Authorities have all but abandoned building social housing, and are selling off the remainder of their stock.

Figures provided by the English Housing Survey Bulletin for 2013-2014 show that 4.4 million now live in private rented accommodation, and just 3.9 million in the social rented sector (council and housing associations).

The security of tenure and fair rents protections, that had been conceded to tenants in the 1965 Housing Act, have been eroded in the favour of landlords by subsequent acts of parliament, including the Housing Act 1980 passed by the Conservatives but never rescinded by Labour.

Over the last decade, “tent cities” for the homeless have sprung up in most cities. In July of this year, Labour-run Manchester City Council sent in bailiffs and police to evict a group of homeless people living in tents on property owned by the University of Manchester. Local authorities are increasingly using draconian Space Protection Orders to prevent the homeless erecting minimal shelter for protection.

Shelter is organising a “Great Homes Debate” with the public, to set a “new homes standard” linked in with the living wage and the demand that government build the required affordable housing.

However, every government over the past three decades has come to office promising, with the well-worn cliché, to build “affordable homes”. Yet none have enacted anything anywhere near what is required.

Shelter at 50 has done a service by exhibiting the powerful work of Nick Hedges, which retains its relevance today.

In the autumn, Channel 5 TV will be airing a follow-up programme of Hedges’s work.

More images can be viewed here: