About 700 people rallied last Sunday in the New South Wales (NSW) regional city of Maitland to oppose state Liberal-National government moves to replace the city’s public hospital with a private, for-profit facility. The demonstration followed a protest a week earlier by about 2,000 workers, retirees and youth at Wyong on NSW’s Central Coast. 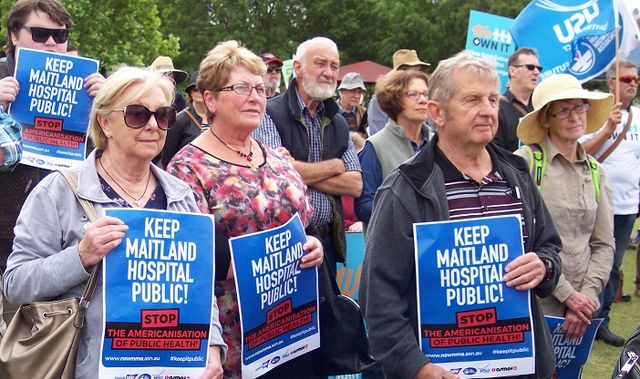 A section of the Maitland rally

Called by the unions, the rallies were a calculated attempt to divert popular concerns over the assault on public health into various futile appeals to Premier Mike Baird’s conservative government, and for the election of a state Labor government in two years’ time.

Central to this political dead-end were bogus claims that Labor and the unions oppose the privatisation of public health and health funding cuts.

UnionsNSW, the Health Services Union (HSU) and the NSW Nurses and Midwives Association made clear at both rallies that they would not tolerate discussion on Labor’s political record or the political alternative advanced by the Socialist Equality Party (SEP).

In fact, Labor and union organisers banned all participants and representatives of other organisations at the Maitland protest from speaking from the platform. UnionsNSW secretary Mark Morey told the demonstration that organisers had “made the decision to allow only local members [of parliament—five of them] to speak.”

Union officials twice refused SEP supporters the right to address the Maitland event. When the SEP challenged them, a UnionsNSW official declared, “We know who you are and what you are saying”—a reference to the leaflets the SEP had distributed at both rallies and to health workers last week at Maitland Hospital.

In a clumsy attempt to cover up this attack on the SEP’s democratic rights, Morey announced that there were “other parties” in attendance, naming the Greens and the Shooters, Fishers and Farmers Party as well as the SEP. “Give them a round of applause for turning up as well,” he declared.

Morey’s attempt to lump the SEP with the Greens and the right-wing Shooters, Fishers and Farmers Party, which have both backed the government’s escalating assaults on the social rights of the working class, was aimed at diverting attention from the SEP’s exposure of the political record of Labor and the unions.

These officials insisted that the cause of the current assault was the “ideological obsession” of the Liberal-National coalition with privatisation, which would lead to the “Americanisation” of the health system. The clear implication was that blame for the attack on public regional hospitals lay solely with the state government, which could and should be pressured to change course. Not a word was mentioned about the record of past federal and state Labor governments.

Holmes and Hayes referred to an announcement by Health Minister Skinner last week that the privatisation of Goulburn hospital had been “taken off the agenda” due to a lack of interest by the private sector.

This, according to Holmes was evidence that Premier Baird could be pressured to reverse the privatisation of the regional hospitals, if only the Maitland community’s voice were “louder and stronger.”

The reality is that Skinner’s claim is a patent lie. The privatisation of Goulburn hospital will be reintroduced just as soon as new “private sector” tenderers step forward.

For decades the health unions and every other section of the union apparatus have collaborated with both Liberal-National coalition and Labor governments alike, state and federal, to assist in the sale of state-owned assets and associated cuts in jobs, working conditions and services.

The sell-off of the state-owned power industry in NSW, for example, began when the last Labor state premier, Kristina Keneally, privatised electricity retail companies, opening the way for the current Baird government to do likewise with power stations and the transmission grid. Union protests over privatisation were a smokescreen behind which the power unions collaborated with management to axe jobs and conditions in preparation for the sell-off (see: “Australian power union calls off New South Wales strike”).

At the same time, Labor has endorsed the federal government’s plans to boost military spending to at least $495 billion over the next decade, along with massive funding of bases for US long range bombers, cruise missile-equipped ships and nuclear powered submarines in northern and western Australia, to help finance Washington’s preparations for war against China.

As the SEP has explained, the union-controlled protests over the privatisation of NSW regional hospitals have a specific political aim: to keep the mounting opposition of workers and youth to the government’s privatisation agenda trapped behind the Labor Party. That is why the first step for all those seeking a way to defeat the assaults on healthcare and other vital social services is to make a complete political break from the Labor Party and the trade unions.

The defence of public health can only be taken forward through the development of an independent political movement of the working class, based on the fight for a workers government, which will implement socialist policies, including the nationalisation of the banks, the giant pharmaceutical companies and the private healthcare providers, and the provision of billions of dollars for free, high-quality, healthcare, under the democratic control of the working class, that will deliver the best and most advanced health services to all.