By our correspondents
29 October 2016

Socialist Equality Party candidates for president and vice president, Jerry White and Niles Niemuth, have held a series of widely-attended meetings on the West Coast and in New York over the past several days. The meetings are part of a tour culminating in the November 5 conference in Detroit, Socialism vs. Capitalism and War.

On Wednesday, White spoke to a meeting of more than 100 students, workers and young people attended at San Diego State University in Southern California. Another meeting was held the following night at the University of California, San Diego, and White and SEP National Secretary Joseph Kishore are speaking at a meeting today in Berkeley.

On Thursday, Niemuth addressed an audience of nearly 40 students at the State University of New York at Geneseo, located south of Rochester in the western portion of the state. Niemuth also spoke in Syracuse on Wednesday and is holding meetings in Rock Island and Chicago, Illinois over the next week. 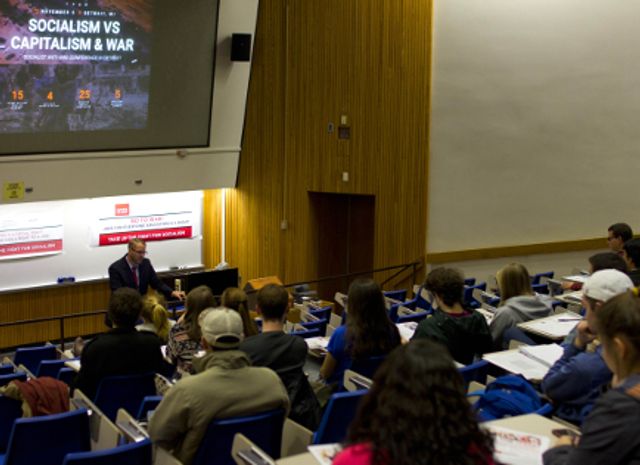 The central focus of the SEP election meetings has been on the danger of war, which is not being discussed during the 2016 election campaign between Hillary Clinton and Donald Trump. The SEP candidates have spoken about the right-wing character of the Clinton campaign, the significance of the rise of Trump and his fascistic program, and the experience of the candidacy of Bernie Sanders.

In his remarks at SDSU, White noted the way in which Clinton and the Democratic Party have sought to deflect all criticism of the corrupt relations between the candidate and Wall Street—as exposed in the email leaks from WikiLeaks—by charging that Trump is an agent of Russian president Vladimir Putin.

White’s presentation was followed by a lively question and answer period on such issues as the SEP’s position on the Middle East, climate change, Green Party presidential candidate Jill Stein, and what to do on election day. A common theme in both meetings in San Diego was the role of identity politics and Black Lives Matter, leading spokesmen of which have come out openly in support of Hillary Clinton.

White urged those attending to vote for the SEP on November 8. The SEP candidates have official write-in status in the state.

During the question period at the meeting in Geneseo, Niemuth addressed the connection between war abroad and domestic repression, including police violence at home, as well as the SEP’s demand for free public education at all levels and student-loan forgiveness. He also clarified the class nature of the Venezuelan and Cuban governments, which are bourgeois-nationalist, not socialist.

Isabel, a sophomore majoring in history and creative writing, told the WSWS after the meeting that “the 2016 elections are a joke” and that she enjoyed the meeting because it discussed the historical background of American imperialism. “It’s scary because millions of people are dying because of American imperialist actions, and people don’t understand the historical reasons for that. …”

“Tonight provoked me to think about it more. It should be a bigger focus about what we’re talking about, but I’m confused about why so many people think it’s a positive thing to be aggressive. In the upper echelons I understand—it’s imperialist, it gets them power and money. This meeting really makes me want to read about Russian history and socialist and communist history.”

Many have left comments upon registering. Kelsey, in Detroit, Michigan, wrote that she is attending the conference because “the Earth and our lives are more important that profits. I want to work towards dismantling the systematic oppression and destruction of the human race.”

Patrick, in Chicago, Illinois, said that he was attending because the SEP “is the only political organization discussing the major issues in our world: wealth inequality and endless war. The powers-that-be have devoted the 21st century to the slaughterhouse, and it’s time for them to be stopped.”

Andy, from Downers Grove, Illinois, wrote: “I am attending the conference to push for an anti-war movement and to promote socialism in order to create a more free and equal world,” while Viraj from Pittsburgh, Pennsylvania said he was traveling to Detroit to “learn more about socialism and to know the main differences between capitalism and socialism.”

Jim, from Ontario, Canada, wrote simply: “I am attending because I want socialism—not a nuked, dead planet.”

For more information and to register for the November 5 conference in Detroit, click here .