By our correspondents
29 October 2016

The Socialist Equality Party (SEP) and International Youth and Student for Social Equality (IYSSE) in Sri Lanka are conducting an extensive campaign for the forthcoming Colombo public meeting on the US elections. Entitled “The threat of world war and the US presidential election,” the event is on October 30 and will be addressed by US SEP presidential candidate Jerry White via the Internet.

Thousands of World Socialist Web Site articles on the US elections have been distributed by campaign teams in Colombo and surrounding suburbs as well as in the central hill districts and in northern Jaffna.

The Sri Lankan media, which presents little on international developments, has only published a few reports and articles on the US elections. An editorial in the Daily Mirror, a leading English-language daily in Sri Lanka, recently declared that the US presidential election would “not bring about earth-shaking change” for “the people of South Asia, Africa and the Middle East.” The comment is a desperate attempt to hide the explosive political issues underpinning the American elections and their international consequences.

By contrast, Sri Lankan workers, young people and university students have held animated discussions with SEP and IYSSE campaigners. Many were keen to discuss the crucial political issues in the election—the crisis of American capitalism, Washington’s increasingly aggressive attempts to reassert its global hegemony, the danger of a third world war, and the growing radicalisation of the working class. We publish below some selected interviews.

Kalhara, a science faculty student, said: “A war situation has developed all around the world. This is something that we—I mean our generation—has never seen before. You are the only group explaining the connection between the American election and threat of a world war. It’s very important.” 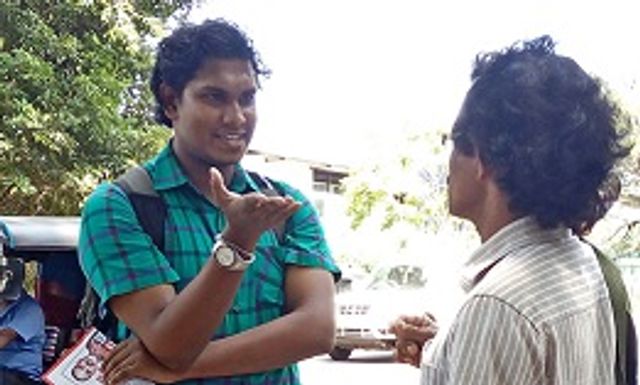 He agreed that both Hillary Clinton and Donald Trump, candidates of the Democratic and Republican parties, represented the American ruling class and would continue Washington’s ongoing wars. He said the military destruction in Syria and Iraq were “terrible crimes.”

Kalhara rejected claims that a Clinton victory would boost the rights of women internationally. Referring to the late Prime Minister Sirima Bandaranaike and former President Chandrika Kumaratunga, he said: “We live in a country were two women leaders ruled for decades. Did it even slightly change the plight of ordinary working woman of Sri Lanka?”

A campaign team spoke with science faculty students at Colombo University. One student said: “Trump is a fascist and Clinton is very unpopular but can’t we say that a Clinton victory would be less dangerous than Trump winning?” Another student added: “Trump’s Islamophobia could bring massive destruction both outside and inside America.”

SEP and IYSSE supporters said that while Trump represented fascistic tendency, Clinton was a representative of the American military intelligence complex and directly responsible for US war crimes internationally. 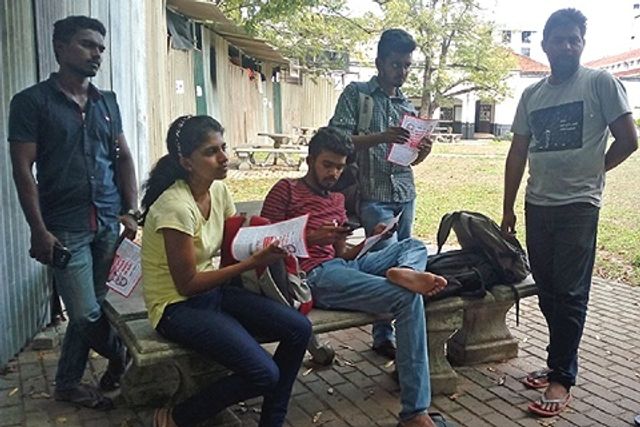 Reading the SEP campaign leaflet, another student said: “We understand the necessity for another anti-war movement. No country can escape [Washington’s] war drive. Even the regime-change that happened [in Sri Lanka] on January 8 [2015], was driven by international influences.”

A female student said that previous anti-war movements fizzled out and asked how another new anti-war movement could succeed. Her question sparked an important discussion about the popular opposition to US-led invasion of Iraq war in 2003.

SEP campaigners pointed out that this movement was dominated by pro-capitalist organisations and pseudo-left formations and directed towards the United Nations. A new movement must be built on internationalist and socialist principles, they explained.

Another student said it was “important” that the WSWS and SEP were bringing these international issues and political ideas to the attention of students. “There should be room for open political discussions within the universities.”

Dhanu, also a Colombo University student, said: “I was interested in the first round of US election candidate nominations and thought that [Bernie] Sanders would win [Democratic Party nomination]. Recently there was a meeting about the US presidential election at Colombo University organised by Rotary Club. Its main concern was the impact of the American elections on Sri Lanka. But it is very important to approach this election in an international manner and look at it from the standpoint of the working class.”

Fathima, a Wayamaba University student from Sri Lanka’s north-western province, said that Clinton and Trump represented the interests of big business. “Through the media I’ve seen that workers and youth in America are facing a large-scale attack. Poverty and unemployment has increased,” she said.

“I saw Trump campaigning against immigrants and saying ‘only Americans.’ This is not good and causes all sorts of problems for minority communities. Tamils and Muslims in Sri Lanka are facing the same kind of problems.”

Fathima said that Clinton represented the interests of big banks and the financial elites and said American imperialism was responsible for the war in Syria and the conflict in Libya. There was no difference between Clinton and Trump, she said, and added: “This is the first time, however, I’ve heard about a socialist candidate contesting this election, and about the WSWS. I will follow the WSWS.”

Nihal is a social worker and involved with residents at Wanathamulla in Colombo who are being threatened with eviction by the government. “What we know about the American election is from the media,” he said.

“Whoever becomes president will not make any difference. The US State Department’s policies will continue. All they’re concerned about is the security and interests of the elite. They’ll do anything to achieve this, irrespective of whether it causes a war or any other issues that create problems.”

Spun, a Sri Jayawardenepura University graduate, said: “I closely follow the US elections and, after listening to the debates, now understand the crisis of the US ruling elite. I was motivated to follow the elections because the decisions taken by the ruling elite of this major power are impacting other countries. After hearing you, I now realise that the changes occurring within the US working class are important for the socialist movement of our countries. The campaign for a real socialist candidate is a very powerful message.”

The SEP and the IYSSE in Sri Lanka urge all those who are seeking a genuine alternative to imperialist war and capitalist austerity to attend the meeting and support the fight for an anti-war movement based on a socialist program, the only progressive alternative for the working class and oppressed masses of the Indian sub-continent and elsewhere.