By our correspondents
31 October 2016

Over 100 workers, youth, professionals, housewives and members and supporters of the Socialist Equality Party (SEP) in Sri Lanka, attended a public meeting in Colombo addressed by Jerry White, the presidential candidate of the US SEP, via the Internet on Sunday evening. The meeting was organised by the SEP and the International Youth and Students for Social Equality (IYSSE) in Sri Lanka.

Before the meeting, the SEP and IYSSE in Sri Lanka conducted campaigns in Colombo and its suburbs, central plantation districts and Jaffna to discuss the intervention of the US SEP in the American election. During the 2012 presidential election campaign, White visited Sri Lanka, went to several areas, including rubber plantations in central hill districts, and addressed public meetings, including one in Colombo. 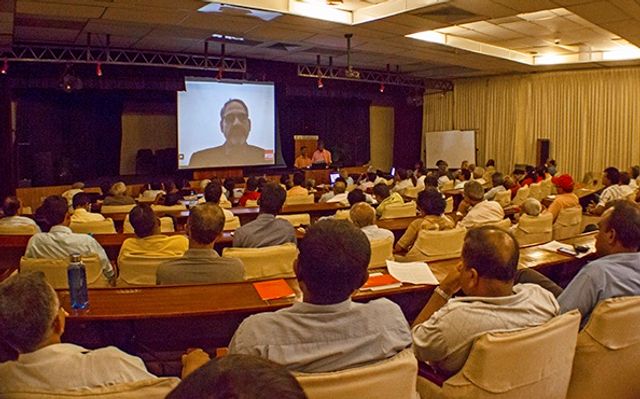 Yesterday’s meeting concluded with the unanimous adoption of a resolution supporting the socialist anti-war conference to be held by the US SEP in Detroit on November 5. The vote was a powerful expression of the socialist internationalism that animated the meeting.

The resolution began: “This meeting fully supports and sends its greetings to the conference on Socialism versus Capitalism and War to be held by the SEP and IYSSE in US on November 5. We believe that conference will be a very important step in the struggle waged by the ICFI [International Committee of the Fourth International] for building a socialist international movement of the working class and youth in US and internationally against imperialist war.”

Ratnayake contrasted the response of the pseudo-lefts in Sri Lanka to the US election, noting that the United Socialist Party (USP) in Sri Lanka boasted that its US sister party, Socialist Alliance (SA), backed Bernie Sanders’ campaign for the Democratic Party nomination and his false claims to be a socialist. After Sanders lined up behind Hillary Clinton, SA began supporting the candidate of the capitalist Greens party. 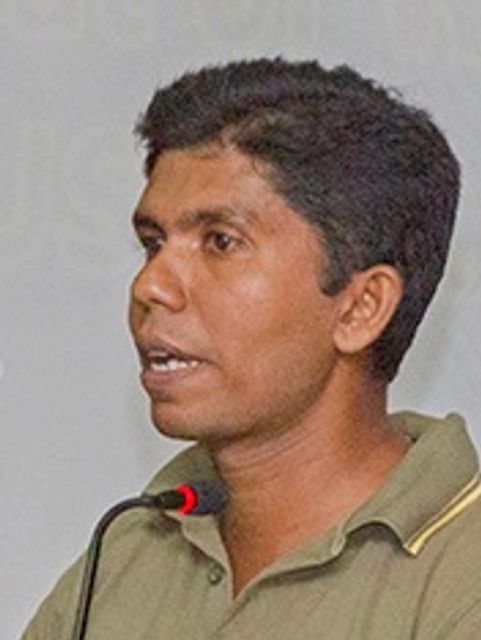 Kapila Fernando, the IYSSE convener in Sri Lanka, referred to some of the experiences of the campaign for the meeting among university students. Though the Sri Lankan media had largely ignored the US election, he said, many students were keen to discuss the growing danger of world war, how to stop it and the struggle for socialism.

Fernando explained that one young teacher had watched a TV debate between Clinton and Trump and concluded that the American people were all backing war. But when she read articles on the WSWS, she realised the situation was quite different.

Deepal Jayasekera, the SEP assistant secretary, pointed out that every part of the globe was increasingly being dragged into the maelstrom of global geo-political tensions, above all through the actions of the US. Washington’s aggressive turn to assert its global hegemony raised the threat of another catastrophic world war.

Jayasekera said the US was making every attempt to harness India as a frontline state in its preparations for war against China. Like the Indian government, the pro-US government in Colombo was also integrating Sri Lanka into Washington’s war plans in Asia. 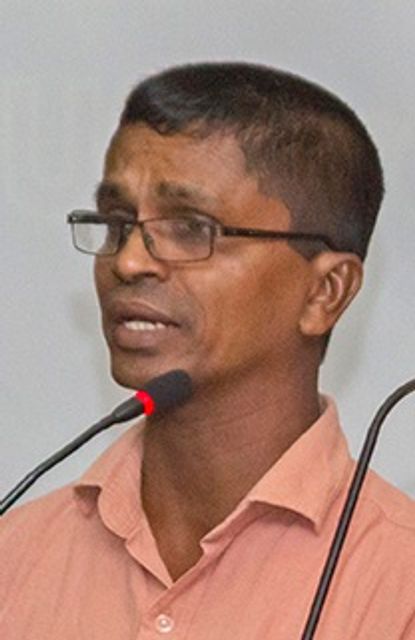 “In this situation, for White to be speaking here about the US and its hegemonic drive is immensely important for workers and youth in this region, including Sri Lanka,” Jayasekera said. It was critical to building the international unity of the working class against war on a socialist basis and constructing revolutionary parties.

Jerry White began his speech to a rousing welcome from the audience. His comments were translated simultaneously into the Sinhala and Tami languages.

Highlighting the international nature of the US SEP’s election campaign, White said: “From the beginning of our election campaign, my running mate Niles Niemuth and I have directed our appeal not only to workers in the United States, but to our brothers and sisters in Asia, Europe and around the world who face the same social crisis, the same attack on democratic rights, and the same danger of world war that threatens the very future of human civilisation.”

White pointed out: “The billionaire real estate mogul Trump is seeking to channel political disaffection down the reactionary path of anti-immigrant chauvinism, economic nationalism and the suppression of political dissent. He has the monopoly on appealing to popular discontent because of the anti-working class policies of the Democratic Party and what passes as the official ‘left.’

“Clinton personifies the political status quo. She is the favoured candidate of Wall Street and the corporate and political establishment. She counts among her supporters not only leading Wall Street bankers but also the architects of the illegal invasion of Iraq, CIA torture and NSA spying.”

The presidential candidate referred to sharp political differences in the American ruling class under conditions of the deep crisis that Washington’s militarist policies have faced in Middle East, Europe and Asia. He insisted that there was no “peace faction” in the American ruling elite, as the US war drive “in the end, is rooted not in the subjective motivations of individual politicians, but the objective contradictions of American and world capitalism.”

White explained that “the same contradiction that produce imperialist war also produce the objective basis for socialist revolution.” He continued: “The radicalisation of broad sections of workers and young people found initial and distorted expression in support for the self-described ‘socialist’ Bernie Sanders. However, as the SEP warned, Sanders is now seeking to channel his supporters behind the warmonger and stooge of Wall Street, Clinton.”

White outlined the growth in struggles among autoworkers, teachers and telecommunication workers in the United States, saying it was part of the reemergence of working class struggles internationally. “The demands for ever-greater sacrifice is driving the American working class—the great sleeping giant of world politics—into struggle in the very heart of world imperialism,” he said.

The candidate explained that the working class had not “disappeared,” as the demoralised upper middle class proponents of pseudo-left politics claimed. “There is an immense working class within the United States. Globally, more than 1.5 billion workers in China, India and other countries have joined the ranks of the international proletariat in the last two decades.” But, he continued, the historic role of the working class, as the gravedigger of capitalism and the bearer of far more advanced, socialist property relations, can only be realised through a revolution with the Marxist party at its head.

Explaining that the US elections will resolve nothing for the working class in the US, Sri Lanka and internationally, White insisted: “It is necessary to prepare for the struggles to come—against war and inequality, against dictatorship, and against capitalism.” He concluded by emphasising the SEP’s “immense confidence that, on the basis of the international unity of the working class, combining the strength of the vast majority of the population that wants peace and equality, we will build a powerful social and political movement to finally put an end to the capitalist system.”

Following White’s speech, which was warmly received, a lively discussion developed, with several questions from the audience, including about the erosion of the two-party system in US and the experiences of the US SEP in its election campaign among workers and youth.