The death of actress Carrie Fisher on Tuesday at the relatively young age of 60, several days after suffering a heart attack aboard a flight from London to Los Angeles, has evoked expressions of grief from her many fans. The sadness over Fisher’s passing is compounded by the sudden death, just one day later, of her 84-year-old mother, the well-known actress Debbie Reynolds. 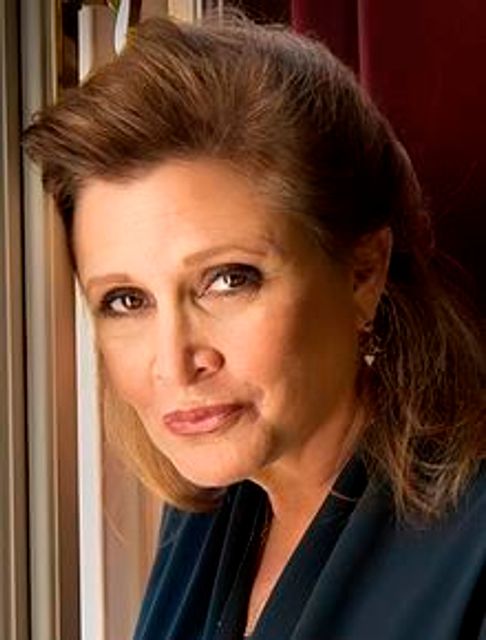 Carrie Fisher achieved success not only as an actress but also as a writer and humorist. She was an appealing figure and personality. The daughter of actress Debbie Reynolds and singer Eddie Fisher, Fisher grew up in the entertainment business. When she was born in Beverly Hills in 1956, her mother was one of the biggest stars in Hollywood. Reynolds also had a successful recording career.

Carrie Fisher bore the numerous scars of this upbringing and this milieu, characterized by intense insecurity, instability and self-involvement. It is easy to scoff at the difficulties of someone who grows up in this affluent world, but the list of children of film, television and music stars who have done themselves in, one way or another, is tragically long. Fisher did not suffer that fate, but she certainly suffered. Her struggles with drugs and emotional problems are well-known.

At the age of 19, Fisher landed a leading role in the first Star Wars film (directed by George Lucas), as Princess Leia. She played the same role in two other films in the first series, and showed up again in one of the many sequels, Star Wars: The Force Awakens, in 2015. She also appeared in several dozen other films, mostly in smaller parts.

Fisher also wrote several books, the best known of which is Postcards from the Edge (1987), a thinly and comically disguised portrait of her mother and herself. The novel was made into a mediocre film (1990) directed by Mike Nichols, with Meryl Streep and Shirley MacLaine. Reportedly, Fisher made a living in the 1990s as a “script doctor,” repairing or improving other people’s screenplays.

More recently, she adapted her memoir, Wishful Drinking (2008), into a one-woman show, which had some success in theaters in 2009-10. It was made into a television documentary and released by HBO in September 2011.

Fisher specialized, in her writings, in bringing out the surreal aspects of life as the child of “celebrities,” and then as a celebrity herself. There is a certain self-mocking and self-deprecating charm to her work. She could capture the desperation and absurdity of the pursuit of stardom, of those hoping “to get out of the anonymous frying pan and into the Hollywood fire”—and enumerate its tremendous psychic costs.

Fisher became an amused, skeptical observer of Hollywood, but not its mortal enemy. In another, more radicalized era perhaps, her insight and anger might have carried her much further to the left. As it was, in the stagnant 1980s and 90s, she didn’t travel terribly far. One has the sense that the overall social and artistic conditions never permitted Fisher to look with sufficiently objective and critical eyes at the milieu in which she grew up. She always remained tied to it by numerous strings.

In this age of celebrity worship, it comes as no surprise that the media coverage of Fisher’s death is out of all proportion to her actual achievements. No disrespect is intended here. But an honest evaluation of her career and talent could not avoid the conclusion that Fisher was not a major figure in the history of American cinema. Nevertheless, substantial portions of the national news have been devoted to her passing. In death, we discover, that she is an “icon,” a “legend,” and so forth. One suspects that Fisher herself would have laughed at this sort of media blather.

A.O. Scott, the New York Times film critic, enthused (in “Carrie Fisher, a Princess, a Rebel and a Brave Comic Voice”) that Fisher “entered popular culture as a princess in peril and endures as something much more complicated and interesting. Many things, really: a rebel commander; a witty internal critic of the celebrity machine; a teller of comic tales, true and embellished; an inspiring and cautionary avatar of excess and resilience; an emblem of the honesty we crave (and so rarely receive) from beloved purveyors of make-believe.” This is over the top, unnecessarily and substantially so.

The claims for Fisher are only partly inspired by her career, less than the individual writers and eulogizers may think. Much of the over-praise and flattery has to do with the Star Wars franchise itself and its enduring impact. The various commentators are pumping up this “legend” of a franchise as a means of elevating and legitimizing the last several decades of American filmmaking, without question the weakest decades in its history.

Whatever the intentions of George Lucas and others, and they may have been relatively innocent and light-hearted to begin with, there is no question but that Star Wars helped mark the transition in cinema terms to a period of banalization and decay.

The Oxford History of World Cinema explains: “The Hollywood film industry entered a new age in June 1975, with the release of Steven Spielberg’s Jaws. Two years later, George Lucas’s Star Wars spectacularly confirmed that a single film could earn its studio hundreds of millions of dollars in profits, and convert a poor year into a triumph. The place of movies within the Hollywood production system changed: increasingly the focus was on high-cost, potentially highly lucrative ‘special attractions.’”

Walter Metz, in the Cambridge Companion to Modern American Culture, argues that “ Star Wars fundamentally changed Hollywood filmmaking at the aesthetic and narrative level but, in terms of the industry, merely returned the business toward the production of big-budget, mass audience blockbusters.”

Critic Robin Wood, discussing the “Lucas-Spielberg Syndrome,” notes that what was “worrying” about the phenomenon was the “enormous importance our society has conferred upon the [Star Wars] films.” The old serials made in the 1940s, which Star Wars was supposedly inspired by, had a “minor and marginal” role in the culture, Wood pointed out, and thus “they posed no threat to the co-existence of challenging, disturbing or genuinely distinguished Hollywood movies, which they often accompanied in their lowly capacity. Today it is becoming difficult for films that are not like Star Wars … to get made.”

This process is far more advanced today. Of course, the filmmakers were not responsible for the growing social indifference and turn to the right by substantial sections of the middle class. They merely reflected and carried forward the process. But there is no reason to mythologize Fisher’s Princess Leia, much less the Star Wars series as a whole.