For a socialist movement against war and militarism!

By our correspondents
20 January 2017

On Monday, the final meeting of the IYSSE took place at Berlin’s Humboldt University (HU) as part of the campaign for the elections to the student parliament, held over Tuesday and Wednesday.

The meeting was attended by some 50 students and young workers, who attentively followed the various contributions and participated in the ensuing discussion. The meeting was chaired by Katja, a history student at Humboldt University and one of the IYSSE representatives to the student parliament last year.

“We are participating in the elections to build an international and socialist movement against war,” Katja said in opening the meeting. “This is why we have dedicated today’s event to this theme.” She recapped the last three meetings conducted by the IYSSE at HU. These centered on the election of Donald Trump as well as the return of German militarism and the role the universities play in this. 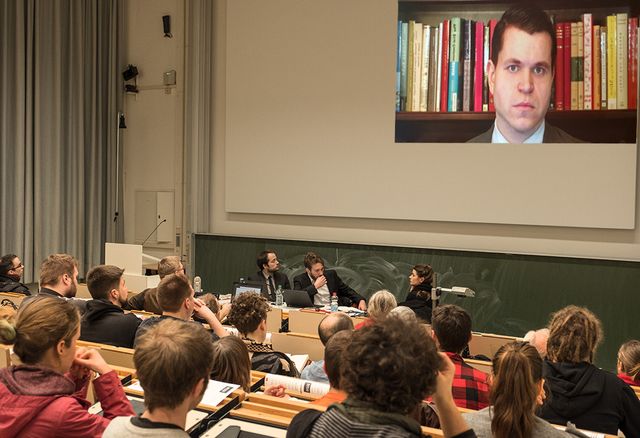 The first contribution was from Andre Damon, the IYSSE spokesperson in the US. Damon gave an assessment of the incoming Trump administration and political developments in the United States. “The inauguration of Donald Trump, which is scheduled for this coming Friday, is an unprecedented political event in American history,” he said. “His government will be a government of billionaires, by billionaires and for billionaires.” It was the result of a policy that had made the United States the country with the greatest levels of social inequality.

There was no dispute in the ruling elite about this, Damon said. The only conflicts revolved around the question of who should be the first target of America’s belligerent foreign policy. While Trump wants to focus action against China, the Clinton camp prefers a direct confrontation with Russia. The basis of the policy of both wings was the collapse of industrial production in the US since the post-war period, he said.

The interests of the population no longer found any expression within the existing political system. In 2003, the largest demonstrations in world history had occurred, against the Iraq war. “The vast majority of the American population rejects war,” Damon said. “They are not enthusiastic for the campaign against Russia or China. They are not represented by the political establishment in any way, either by Trump or Clinton.” The only way to fight against war is through the building of a socialist movement based on the working class.

The IYSSE spokesperson in Germany, Christoph Vandreier, then developed this argument. Nationalism and militarism were well advanced in Europe, although a majority of the population rejected this policy. Trump’s coming to power had further fueled this development.

Vandreier quoted from an interview with Trump by the tabloid Bild, in which he announced a ruthless trade war and a nationalist economic policy. The German elites have responded by demanding an upgrade to the country’s military capacity. “The danger of a third world war is greater than ever before,” said Vandreier.

But the IYSSE has not reacted to this development with pessimism: “The same contradictions that lead to social inequality and war prepare the objective basis for revolution, for the overthrow of capitalism. That is why today, one hundred years after the October Revolution of 1917, the question of revolution is back on the agenda.”

Vandreier quoted extensively from the perspective on the anniversary of the October Revolution, published on the WSWS earlier this year, and explained why it was so important to draw the central lessons of history in order to build a socialist anti-war movement.

Sven Wurm, the spokesperson for the IYSSE group at Humboldt University, concluded the contributions by talking about the importance of the fight against the ideological preparations for war and the work of IYSSE. Three years ago, the IYSSE had fought against attempts to rewrite history to discredit the October Revolution and therefore deny there was any alternative to capitalism.

At that time, Jörg Baberowski, professor of Eastern European history, had invited Robert Service, the author of a discredited biography of Leon Trotsky, to the university. It quickly became clear that Baberowski too sought to falsify the history of the October Revolution and play down the crimes of the Nazis. Today, Baberowski is beating the drum for a new war and a police state.

The ruling class is increasingly reliant on lies because its policy is hated by the population, Wurm said. The IYSSE, on the other hand, is fighting for the historical truth. “With our work, we contribute to raising the political consciousness among students, young people and the whole working class. This is how we prepare a socialist movement against war and capitalism,” he concluded.

Following the contributions, audience members raised many questions. One student wanted to know what would be the consequences of a trade war between the US and Europe. Another asked how students in the US have responded to Trump’s election and the work of IYSSE. Another student asked what a revolution really means and whether it is really necessary.

Several IYSSE speakers stressed that a revolution was necessary to prevent new wars. “In order to stop workers being plunged into a mutual slaughter, they have to fight against the ruling class, against capitalism, which is responsible for war,” said one.

Andre Damon returned to the question of the anti-war sentiment among US students, but stressed that a new anti-war movement required a historical understanding of the roots of the war. This could only be provided by the IYSSE, he said.

The discussion continued long after the official end of the event. Many participants were impressed by the contributions and discussion and expressed their desire to participate in the work of the IYSSE. Daria, who studies economics, thanked the speakers for their contributions, saying, “I found it particularly interesting that the IYSSE does not support one or other government, but stands for an independent movement against war.”

Chloe, a visiting student from Shanghai, said the meeting had been “very good.” “I had not been so clear about how far the preparations for war against China have progressed,” she said. She said she would support the IYSSE election campaign and help build the organization.