More than 200 arrested in Washington DC

Dozens of protests against Trump’s inauguration across the US

Dozens of cities throughout the US saw major protests against the presidency of Republican Donald J. Trump on Friday, with even larger protests being planned for hundreds of cities today.

The ascendency of the demagogic billionaire real estate developer to the highest political office in the United States has provoked unprecedented disgust and opposition from millions of people throughout the country and around the world.

Dalton Bennett, a Washington Post photojournalist, was harassed and slammed to the ground by police as he sought to film the protesters. One law enforcement vehicle was torched and at least two officers received minor injuries. The authorities have charged several protesters with rioting, Reuters reported.

The inaugural events in the nation’s capital and accompanying protests were the impetus for a massive buildup of the military and police apparatus. “To accomplish having a tranquil event amid worries of terrorist attacks and threats by some groups to disrupt the celebration requires bringing in 3,000 police officers from across the nation and 5,000 members of the National Guard,” the Washington Post noted, adding that these forces will bolster “the already large law enforcement footprint imposed on everyday Washington.” 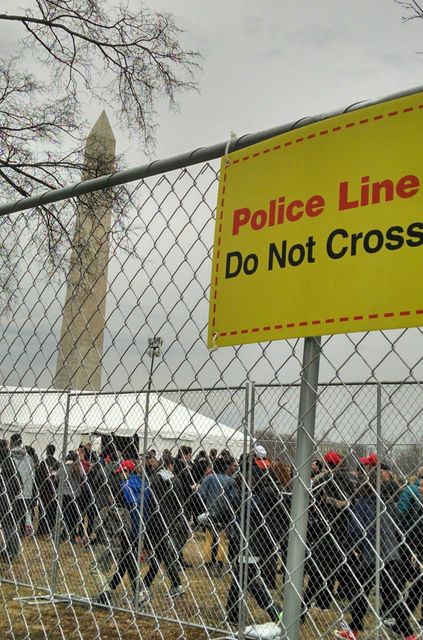 Washington Monument blocked off by barricades

The heightened security measures are aimed at intimidating and suppressing public opposition to Trump. The Post quotes Scott J. White, director of the cybersecurity program at George Washington University, who states “I think [Trump’s] use of social media has a tendency to inflame people’s attitude toward him. And I think this particular method of engaging the public has definitely resulted in a different kind of adversary.”

According to the Post, as many as 28,000 police officers have been summoned to the District of Columbia in order to oversee the protests. Checkpoints and security gates have been set up throughout the Washington Mall and downtown area, requiring attendees to undergo intrusive searches in order to proceed to the Mall area, where the inauguration occurs. 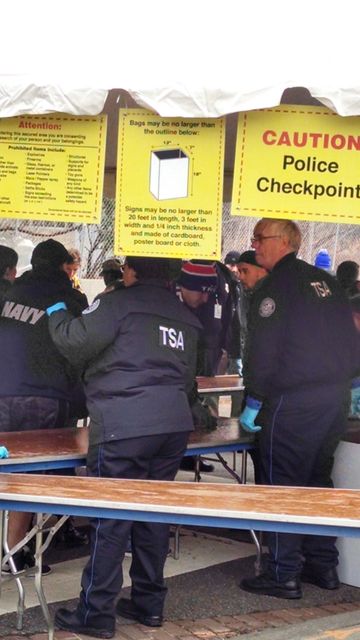 TSA checkpoint on the Washington Mall

On Friday morning, protesters associated with Black Lives Matter momentarily overran a major checkpoint leading to the inaugural gathering while 150 protesters representing an anti-Trump group overwhelmed a security point near the Canadian Embassy. Police pepper sprayed protesters as they confronted attendees at the “DeploraBall,” a pro-Trump gathering being held at the National Press Club on Thursday night.

The protests Friday were among a number of anti-Trump demonstrations occurring throughout the weekend. The Post reports that as many as 63 demonstrations were planned yesterday in DC, with 36 others happening throughout the week. The largest event is likely to be the Women’s March on Washington today, which has garnered several hundred thousand "likes" on social media.

The sheer number of protests and demonstrators, who far outnumber the slight turnout in support of Trump’s inauguration, is a nascent reflection of the mass opposition to the policies of the ruling class in the United States among workers and young people which will only deepen as the class character of Trump’s administration becomes clear. 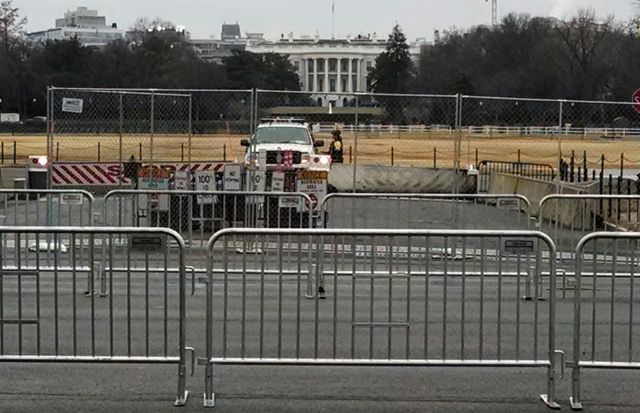 In New York City, a “unity” rally organized by the Democratic Party and attended by a number of celebrities attracted thousands on Thursday night outside of Trump Tower in downtown Manhattan.

Throughout the day Friday, protesters gathered in downtown Chicago to oppose Trump’s presidency. The main address at a 3 p.m. rally hosted by Socialist Alternative, the International Socialist Organization, Democratic Socialists of America and various neighborhood organizations was given by Democratic Cook County Commissioner Jesus “Chuy” Garcia, who challenged Rahm Emanuel for the mayor’s seat in 2015 at the behest of Chicago Teachers Union President Karen Lewis. Garcia’s statements were directed at burnishing the reputation of the Democratic Party as “progressive,” and it is politically significant he was the main speaker at a rally held by so-called socialists.

Around 5 p.m., the crowd of several hundred moved closer to Trump Tower, growing to several thousand. Within 45 minutes the marches broke off into different directions, with some protesters walking onto thoroughfares to stop traffic. Five have been arrested at the time of this writing.

WSWS reporters spoke with a number of protestors in Chicago.

Maria, a high school student, came to the protest to express her opposition to Trump’s attacks on foreigners. “I think what he’s said has been really inappropriate, because regardless if you’re immigrant, refugee, illegal, whatever, we’re still all human beings and we should be loved just the same. 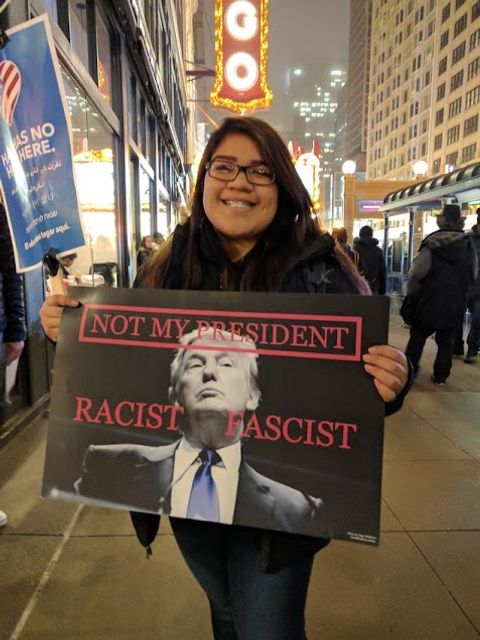 “I feel like he represents brutality at this point, because of everything he’s said and everything he’s acted upon. I think he’s just thinking about himself and his family, and not even taking in mind anybody else, and people he sees on the streets.”

Camilo, a college student studying urban planning, said, “Where do you start? I think the biggest things are the lies that Trump tells, the conflicts of interest, and the level of corruption that’s possible in his presidency. I think his cabinet picks are tremendously bad. It’s going to be a rough four years, but I’m excited about this [the protest], about people getting involved.”

In San Diego, approximately 400 people turned out in the rain to protest against Trump. There was a notable militarized police presence, with officers in army fatigues and bulletproof vests perched on balconies with heavy weapons and binoculars looking down on the protest. Police officers were deployed to prevent students at San Diego High School from walking out to join the protest. Students at the school had previously walked out to protest Trump last year. 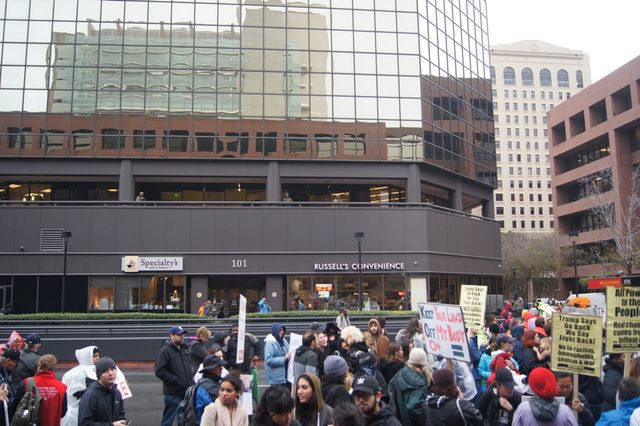 A section of the San Diego protest

A number of those who turned out in San Diego spoke to WSWS reporters.

Ramsey and Pamella, a Mexican American couple living in San Diego but with many friends and family in Mexico, expressed concerns about Trump’s positions on restricting immigration.

“I came out here because I think our civil liberties are threatened by a Trump presidency.” Ramsey explained. “I care about a lot of issues, but especially immigration. I am an immigrant and I work at a restaurant where there are many immigrants, and we are all scared for what might happen under the Trump Presidency.”

WSWS reporters explained that the Socialist Equality Party fights to unite the working class across international boundaries against the national chauvinism promoted by Trump. “We agree, I think connecting working people on both sides of the border is important. I was at a rally recently and someone explained it like this, your liberation is our liberation. I really believe in this. I think all parts of the community need to unite.”

Ramsey was also critical of the Obama administration and the Democrats, noting that, “Many people were won over by his slogan of hope and change but now we have to critically look at what happened the past eight years. Obama was not good for immigrants, and he also supported war and the use of drones.”

Jacob, a San Diego High School student who walked out despite the police presence, also spoke to WSWS reporters. “It was a little scary leaving the school because the cops were all around and a bunch even had their hands on their guns.” When asked what compelled him to leave school, he said, “We feel like us teenagers have rights too. I just don’t feel like Trump represents the people. He’s racist, especially to Mexicans.”

Other students told WSWS reporters that they were protesting Trump in their classrooms daily by not standing for the pledge of allegiance and faced punishment for their actions.