UK protesters speak out against Trump and May 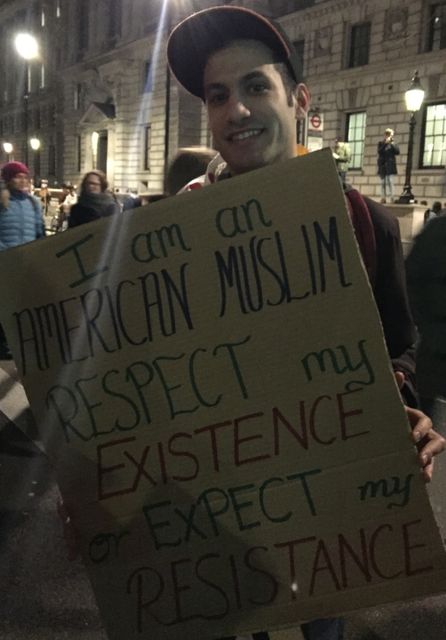 Angelica, 15, said, “I think it’s important for young adults to be interested in political movements and it’s going to impact the whole world, not just America, adding, “We have to make sure things will change and that means more protests like this one.”

Zaine said, “I am an American Muslim living in London and grew up in America and what Trump is doing now is not the America I grew up in. We were welcome in school. I was one of three Muslims in the class with my sister and we had no problems with the teachers and other students in the class.

“In the US, the richest stay strong while the small people at the bottom are run over.” Zaine thought Trump would “get kicked out of the White House as I have never seen a president have this much outrage in history in the first weeks of his presidency.” 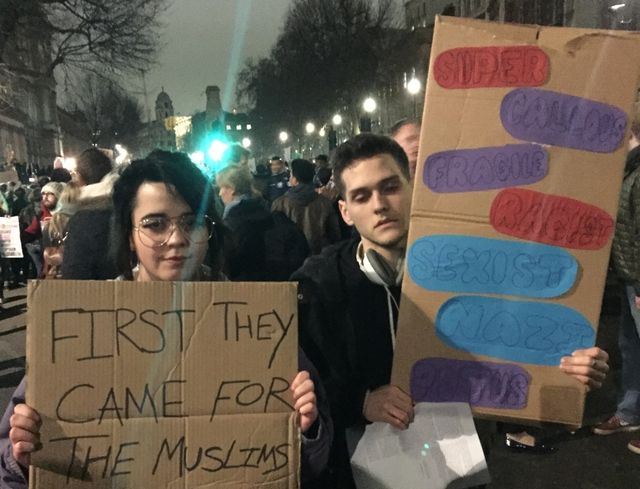 Anna, a forensic worker, said, “To disrespect someone because of their religion is absurd ... The power of people is stronger than the people in power. We can speak above them because they do not speak for us. The Democratic Party is silent on this and through that silence they are helping Trump.” 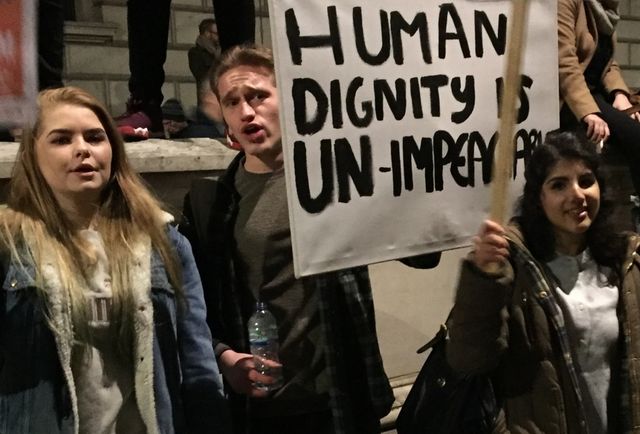 Lara said, “This is now very similar to the 1930s. Trump has created unbelievable amounts of racial division and frankly, he did not win the popular vote. My grandfather fought the Nazis so I am proud of that. Fascism is a result of failure of capitalism. We need more widespread popular support for these type of demonstrations.” 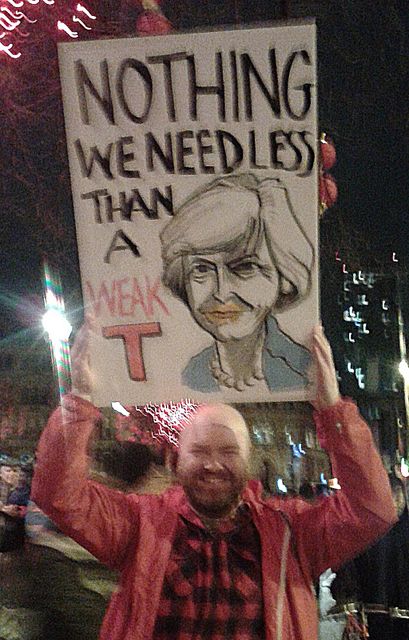 Jamie, who holds down three jobs, said, “I’m one of these people who don’t believe in borders. I don't understand the concept of being proud of one’s nation. I want Theresa May out. To replace her will take a seismic shift. We need to give a revolutionary attitude a chance.”

Jamie expressed support for Labour leader Jeremy Corbyn. When reporters pointed out his record of constant accommodation to Labour’s right wing since he became leader, Jamie responded, “We’re waiting for the knock-out punch [from Corbyn] that never comes.”

Jackie, a teacher, said she attended because “I didn't want to look back and think I had not done anything to change what was happening.” She said the dismissal by the May government of over 1 million people protesting Trump’s policies and his upcoming state visit to the UK was similar to the Blair Labour government ignoring mass protests against the Iraq war in 2003.

“I hope that we have learned the lessons war is about the money and vested interests. Trump has not banned people from countries where he has business interests. The Iraq war was all about the oil.” 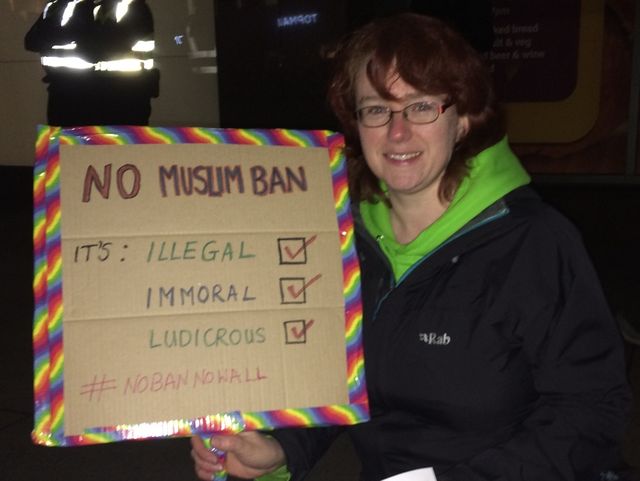 Angela at the demonstration in Glasgow

Angela said of Trump’s chief of staff Steve Bannon, “I don’t think this is a Trump presidency, I think it is a Bannon presidency. He is the one who is controlling Trump. Bannon is basically a Nazi. ... Talking to people who are slightly older than me and remember the end of the 1970s, they say they have never felt this kind of tension since Cold War times when everyone was afraid that someone would press the nuclear button. Given the global tension that is there, something could feasibly kick off.”

Justin, a student from Lithuania, said, “I think there should be demonstrations and people should act because people are being cut off from their homes and from their families. Everything is inter-connected right now, you can’t generalise against certain groups and nationalities.”

Roisin, a nurse, said, “I think the start made by the Trump government is diabolical. It is on a slope that is taking us back in time. I am worried about my future, about the future of people across the world who are going to be victimised and criminalised.

“A lot of his rhetoric, comparing people to vermin and animals is exactly what Nazi Germany was doing, to move people against the Jewish population. He is doing the same against the Islamic population.” 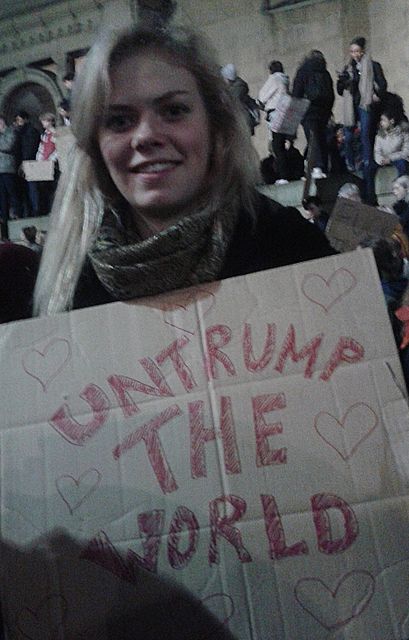 Molly at the Leeds demonstration

Molly, an international development student in Leeds, said, “Trump and what he represents is not just a problem for the US. It is a problem all over the world—that is the rise of the far right. It is an attempt to move everything backwards in time.

“I think there were a lot of reasons he was elected. The main one was a protest vote because of how bad things had become in the US. People are very dissatisfied and they voted for someone they thought was anti-establishment.

“They were sadly mistaken. He represents the elite, but to a more terrifying degree than we have seen in decades. He wants to take things back to the 1930s. It is going to make things worse for all of us. I think we have to take collective responsibility. We have to change the system. Socialism is the only way forward.”

Lauren said, “It’s beyond me how dangerous America is right now. Trump is an egotist who’s only thinking about himself, and he’s drawing in dangerous people behind him, who are going to make changes that are going to have an impact on generations of people.”

Ethan said, “Trump’s executive order is banning people coming and stopping people travelling who have green cards and have been vetted and are definitely not terrorist. Those countries with oil and stuff like that, which makes him money and he has vested interests in, he won’t sabotage them.”

Alison said, “They seem to be turning the clock back to the middle of the last century. ... It is in every area, from the misogyny, the attitude to ethnic minorities, the reaction to refugees, to climate change. Every day when you wake up, you wonder what will be next.

“There are obviously huge inequalities in society that Trump is able to exploit. He claims to speak for them, with his criticisms of the ‘elite.’ But he is part of the elite. Hillary [Clinton] was obviously disliked as a candidate, so lots of people didn’t want to vote for her. Another person would probably have done better. That said, she still won the popular vote.”

Carrie said, “Everything that has been simmering below the surface for a long time has come to the top. There are those who feel finally they can get their way.” 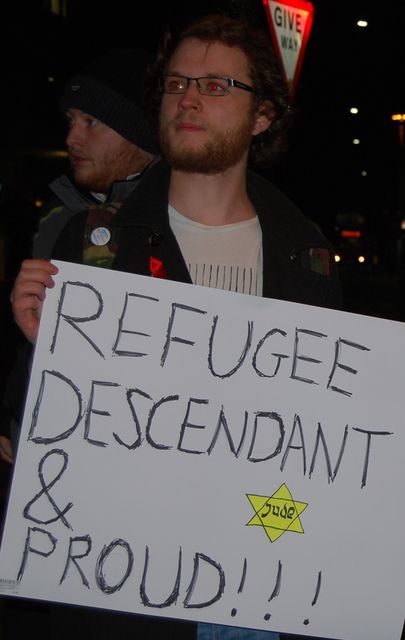 A group of pupils from High Storrs School attended. Euan explained, “We’ve come out because we have a strong hatred towards Trump. He stands for everything I disagree with.” Stan said that it felt like the world, and the US in particular, was “stepping backwards.” Quin, agreed. “It is similar to what happened in the 1930s.”

Jill said, “Both my sons are in the United States and they are married to American women. I hate Trump’s stance on women in particular. It is part of his whole mentality. Presidents are meant to be the figureheads of a country, to unite it. What I find most worrying is that his actions will only increase the danger of terrorism by removing people’s rights.”

Will said, “My grandmother was an Austrian Hungarian refugee during the Second World War. Innocent people are fleeing conflicts, we should all be doing everything we can to help them out.”