More than 200 students rallied and marched at Wayne State University in Detroit on Monday evening against Trump’s executive order banning refugees and visitors from seven majority-Muslim countries. Metro Detroit has a higher percentage of residents with Middle Eastern roots than any urban area in the US, and Wayne State University is the home of thousands of students who are immigrants or the children of immigrants.

The protest was the latest in the series of demonstrations in the Detroit area and around the US after Trump signed the order Friday, which indefinitely bars Syrian refugees, suspends all refugee admissions for 120 days and blocks citizens of Iran, Iraq, Libya, Somalia, Sudan, Syria and Yemen from entering the United States for 90 days. Local protests were held over the weekend at Detroit Metropolitan Airport and the Detroit enclave of Hamtramck, which has a large Yemeni, Bangladeshi and Eastern European population.

Students carried handmade signs reading, “No person is illegal,” “No Wall! No Ban!” and “Our Nation is a nation of immigrants.” 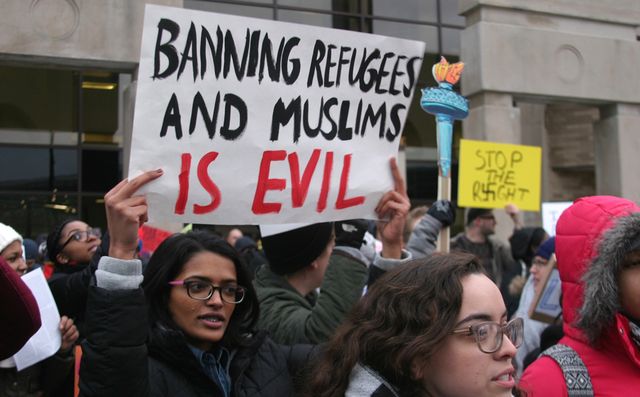 The protest was sponsored by Students Organize for Syria, Amnesty International, Students for Justice in Palestine and By Any Means Necessary (BAMN). Several speakers denounced Trump’s attack on immigrant rights. Nathan Kuehnl, a PhD student, announced that signatures were being gathered to petition the university president and governing bodies “to make Wayne State a sanctuary campus so that we guarantee we do not share information about students’ immigrant status unless it is legally ordered of us.”

The organizers, however, offered no other political perspective than protesting and appealing to the political establishment, particularly the Democratic Party, to defend immigrant rights. This was encouraged by the pseudo-left organization BAMN, which presented the election of Trump as the outcome of the supposed domination of “white supremacy” and the “growth of a neo-fascist, anti-immigrant movement” in the United States.

In his comments, BAMN leader and organizer David Douglass did not say a word about the Obama administration and the Democratic Party and how it paved the way for Trump through endless wars, mass deportations, and relentless attacks on the working class. Instead, he issued a series of demands clearly directed to the Democratic Party, including abolishing the electoral college and stopping deportations. He called for the building of a “new immigrant rights and civil rights movement” based on a “new generation that is majority non-white.”

After organizers led a series of chants, the microphone was opened for other speakers. Socialist Equality Party member Jerry White was warmly received by the audience when he announced he was speaking on behalf of the SEP and the International Youth and Students for Social Equality at Wayne State University. 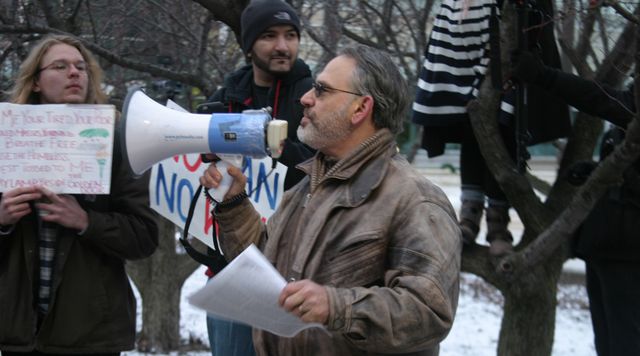 “The anti-immigrant ban imposed by the Trump administration is an attack on all working people, black, white, immigrant and native born,” White said. “What is being done to immigrant workers today will be done to crack down on the democratic rights of all those who want to oppose Trump’s attacks on education, on health care and Social Security, and all of those who want to oppose war.”

White referred to the Palmer Raids in 1919-1920 when thousands of immigrant workers and working class leaders were rounded up and deported in the aftermath of the Russian Revolution and the wave of militant strikes in the US. “Because they were sympathetic to socialism and opposed the war, they were rounded up in cities like Detroit, thrown in mass detention camps in Fort Wayne on Jefferson Avenue and deported from the United States,” he said.

“The rich have always sought to divide the working class along ethnic, linguistic and religious lines; have used racism to divide and weaken the working class. And it has only been through the unity of all workers of every race and nationality that the working class ever made any gains in its social struggle,” White said as the crowd applauded.

“Mr. Trump and his fascist adviser Stephen Bannon are attempting to tell the workers of the United States that the cause of our problems such as unemployment, of budget cuts and school closures is not the billionaires, like Trump, Betsy DeVos and the Wall Street barons. They are telling workers that workers in other countries are getting rich by taking away our jobs and our schools. This is an absolute fraud.

“There is a redistribution of wealth in American society and it’s not going to immigrants; it’s not going overseas; it’s going to Wall Street. It’s going to the corporate aristocracy which controls both big business parties,” White said as the crowd cheered.

“To take up a fight, students here should turn to the workers throughout the city of Detroit, including the workers at GM’s Detroit-Hamtramck plant where in March 1,300 workers will lose their jobs.” The report of the impending layoffs was greeted with boos.

“We have to unite all of the struggles against war, against police killings, against unemployment, against the attacks on education. But one thing must be understood. The Democratic Party is not going to fight Trump. The working class has to fight Trump.”

White noted that President Obama was the “deporter-in-chief” and had deported 2.5 million immigrants. “He bombed the people of the Middle East—the very countries that Trump is banning people from.

Nicholas, a graduate student attending the march told the WSWS, “I think the Trump immigration policy is wrong. What he is doing is illegal. You can’t deny entry on the basis of religion.

“I have a friend who is in grad school who is Iranian. If he goes home he will not be allowed back into the country. The uncertainty is so great. People don’t know what to do.

“I have members of my family who were in the Holocaust. I think it is the same danger that is coming back now. Fear is growing, and in some cases fear is preventing us from being human.”