Food banks, also known as food pantries, are rapidly proliferating on college and university campuses across the US. The College and University Food Bank Alliance counts 434 member food banks at colleges and universities nationwide, an increase of 23 in the span of just two months.

2016 brought additional hardship to part-time students along with unemployed workers in Pennsylvania and 21 other states that implemented changes to eligibility rules for the Supplementary Nutrition Assistance Program (SNAP), otherwise known as food stamps. The federal government cut SNAP benefits for an estimated 500,000 to one million childless adults between 18 and 49 who have been unemployed for over three months. Students enrolled in higher education more than half their time are generally ineligible for SNAP unless they work at least 20 hours a week, care for dependent children, or meet a handful of other exemptions. The change in the work requirement does apply for part-time students.

In response to high unemployment levels in the aftermath of the 2008 financial crisis, many states were allowed to temporarily waive requirements that SNAP beneficiaries work at least 20 hours per week to receive benefits after 90 days. 22 states implemented the cut in 2016, with 22 others doing so in 2015. The justification given for these cuts is a drop in the quasi-fictional official unemployment rate, which does not count workers who have given up looking for work. The US labor force participation rate, the fraction of the working-age population that is employed, remains at lows not seen since the late 1970s, when women entered the workforce en masse.

The draconian SNAP work requirement was itself a product of the 1996 welfare reform law, which then-President Bill Clinton boasted would “end welfare as we know it.” The Democrats are fully complicit in these cuts. At the federal level the question was not seriously raised by either congressional Democrats, then-President Obama or any of the Democratic presidential candidates. At the state level, the cuts were ruthlessly implemented in states with Democratic as well as Republican-controlled administrations. 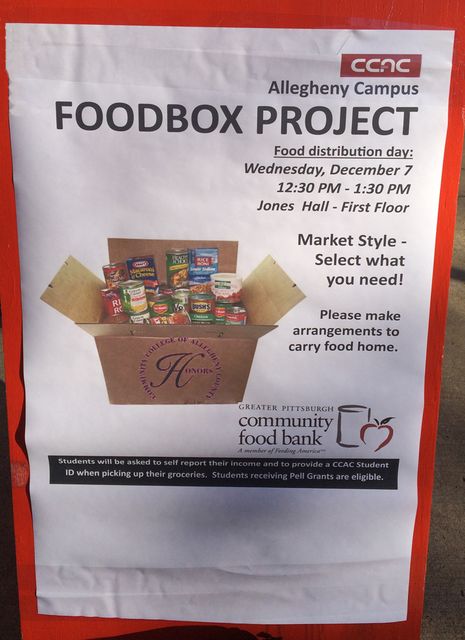 A CCAC staff member, who asked not to be identified, explained her reasons for helping start the food bank during the mid-December holiday season. “I wrote a small grant to get the initiative started. We partnered with the honors class, and this is our third food pantry.”

She spoke of the stigma surrounding hunger. As a result of reluctance to discuss the issue, student hunger is almost certainly under-reported. The proliferation of food banks, however, is a clear indication of the growing need. 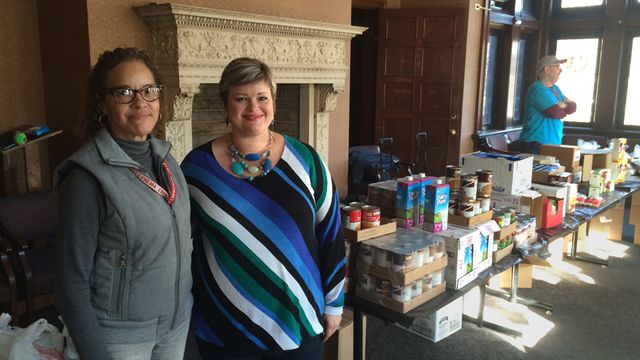 CCAC staff and student coordinators of the food bank

“People don’t want to talk about it; maybe a small circle of friends know. But I put a box of snacks on the table in the cafeteria yesterday, and before I could get them to my office, it was gone. So it helps if they see something that’s easy to pick up. We try to give them things that they can eat right now and they don’t have to worry about shelf life.

“Students have a lot of pride, and that’s why we chose this location, because there is a culinary program in the basement. There’s a bus stop on the corner. If you’ve got a car, you can at least stop temporarily to go load up your food, and nobody is really seeing you carrying bags of groceries through the student union. We try to be mindful of people’s pride.

“When someone thanks us four or five times as they’re walking out the door, we know they really need it. One person said, ‘I’m just trying to fill in gaps from what I already have.’”

She went on to emphasize the need for students in the greater Pittsburgh area. “At South Campus [several miles away], a student stole some food because they were hungry.

“I only got a small grant. We’re trying to get a bigger grant now so we can carry this through to next year.”

Michelle, a CCAC student, explained her reasons for volunteering at the food bank. “Everybody needs to eat, and not everybody can afford to go to the store as frequently as they might need to, especially students.”

Abby, a culinary student at CCAC, gave her thoughts on hunger among students. “I feel that it’s becoming more of an issue in today’s society because the cost of school is so high. People often can’t feed themselves or their families. Some of the students have families, or are single parents, and that makes it even harder.

“I was working 35 hours a week part-time, but I hurt my thumb, cut it with a knife at school, and had to quit my job. I didn’t get workman’s comp because I was hurt at school. I live off loans, about $1,000 a month, and I live with my boyfriend.” 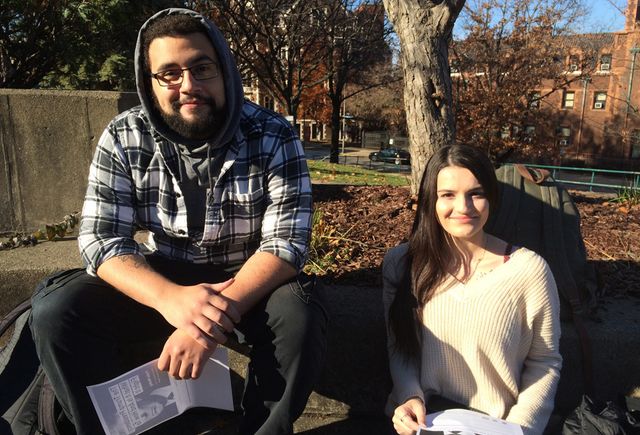 CCAC students Joe and Elle have volunteered at food banks

Elle, a student at CCAC, spoke on hunger in the working class more broadly. “In high school, I volunteered at the Food Bank of Greater Pittsburgh. I definitely think it’s important. I think that hunger is definitely a problem that needs to be solved, because there are people who go to sleep hungry all the time. There are people who don’t have money for food, and that’s a problem.

Joe, who studies graphic communication at CCAC, added, “I heard there were more foreclosed houses than there are people who can actually use them. I used to volunteer in high school as well at a food bank in Homestead. I saw people all the time down there who both took from food banks and volunteered at food banks. It definitely helps out a lot of homeless people.”

Elle continued, “It’s expensive to live and be able to afford everything you need as a human being. The minimum wage is not enough. Fifteen dollars an hour is not enough. Something needs to change. It’s just a question of what and how we can do it.”

The Struggle for Social Equality