By our correspondents
6 February 2017

On February 2, about one hundred students at the University of Bremen attended a meeting in support of the General Student Committee (Asta), which is the target of legal action from Jörg Baberowski. Baberowski, the right-wing professor of Eastern European history at the Humboldt University in Berlin, has sued the Bremen student committee after it criticized his denunciation of refugees and his theory of violence.

“This was one of the biggest meetings in the past few years, despite the fact that we were only able to do relatively little work to promote it,” said Irina Kyburz from Asta. “Those in attendance reacted with indignation to the reports detailing Baberowski’s activities and his political positions.” At the end of the meeting, a vote was held in which all those present unanimously expressed their solidarity with Asta. 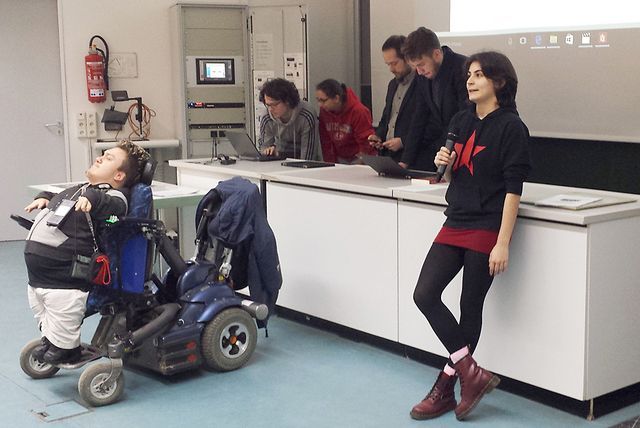 At the start of the meeting, Kyburz and Jan-Eric Hahn explained what had taken place. Baberowski has filed an interim injunction with the Cologne District Court against Asta. According to the terms of the injunction, leaflets drawn up by Asta, which criticise Baberowski’s statements on refugees, could no longer be circulated or reproduced.

“We are outraged by the fact that the Cologne District Court has described our criticisms of Baberowski as vile slander which are to be banned, and has failed to defend our constitutional right to free expression,” Kyburz said. All of the critical comments made in the banned Asta leaflet cited Baberowski’s own statements to the press.

The Bremen Asta invited two representatives of the International Youth and Students for Social Equality (IYSSE) from Berlin to report on their own research and experiences with Baberowski. Sven Wurm, spokesman for the IYSSE at Humboldt University, began by reading a declaration of solidarity for the Bremen Asta from the student parliament of Berlin’s Free University, adopted on the morning of the same day. 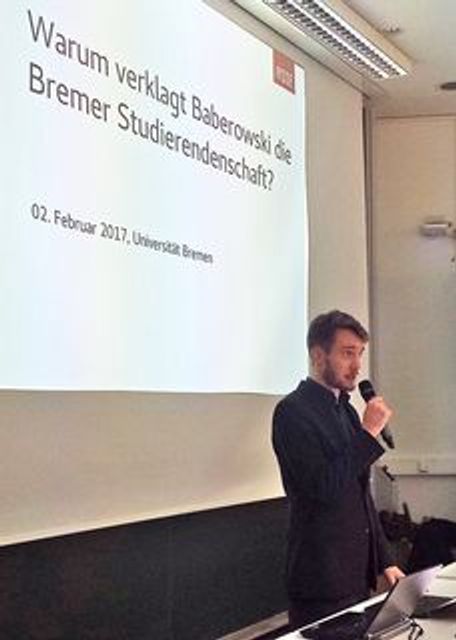 Wurm then explained that the IYSSE is the youth organization of the International Committee of the Fourth International (ICFI). “We are fighting in many countries of the world to build an international, socialist and anti-war movement based on the working class to overthrow capitalism.” Wurm said. One of the central tasks of the IYSSE is the struggle against the ideological campaign at universities to justify and prepare for war and dictatorship.

Humboldt University is a centre for right-wing, militaristic ideology, Wurm explained. In particular, history is being rewritten in order to whitewash the crimes of German imperialism. HU lecturer Herfried Münkler relativizes Germany’s responsibility for the First World War, while Baberowski plays down the crimes of National Socialism. 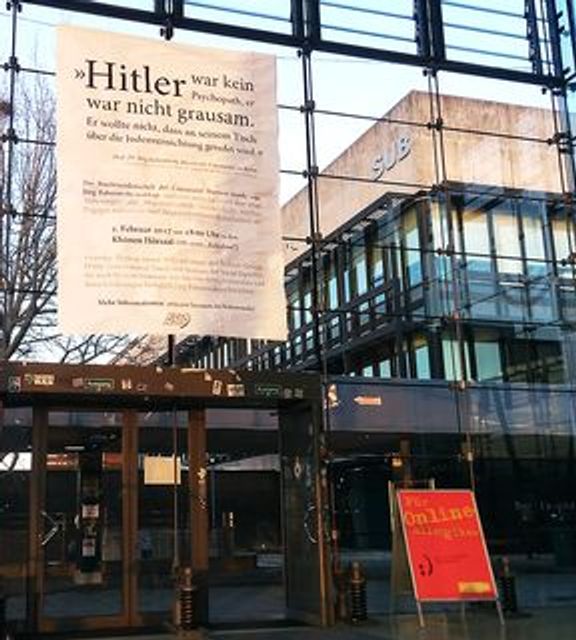 A poster advertising the Asta event with the quote from Baberowski

The second speaker was Christoph Vandreier, assistant national secretary for the Partei für Soziale Gleichheit. Vandreier addressed the quote by Baberowski with which the Bremen Asta had advertised the meeting: “Hitler was no psychopath and he wasn’t vicious. He didn’t want people to talk about the extermination of the Jews at his table,” Baberowski declared in Der Spiegel in February 2014.

Such a statement about the man responsible for the greatest mass murder in history is groundless and cold-blooded. “It is also completely false,” Vandreier said.

As proof, Vandreier played a video featuring Budd Schulberg, who assembled evidence used against the Nazi defendants at the Nuremberg Trials following WWII. Schulberg reports that the SS had its own unit that documented the atrocities of the Nazis on film. The films portraying the atrocities were nicknamed “desserts” because they had been shown to Hitler and his confidantes after dinner as a “dessert.”

“It is quite stunning that the brutality of the Nazis and their leader Hitler is once again up for debate in German universities, based on crude historical forgeries,” Vandreier said, summing up Baberowski’s position. The quotation had not been taken out of context, but had rather been put forward by Baberowski to argue that the opinions of the apologist for Nazi crimes, Ernst Nolte, were historically correct.

Vandreier went on to demonstrate that this statement was no mistake. In fact, the relativisation of Nazi crimes is a thread running throughout Baberowski’s work. Again and again, one finds formulations in his work that deny that the Nazis carried out a systematically planned mass murder in Eastern Europe, and that justify the extermination of millions as a reaction to the resistance of the Red Army. 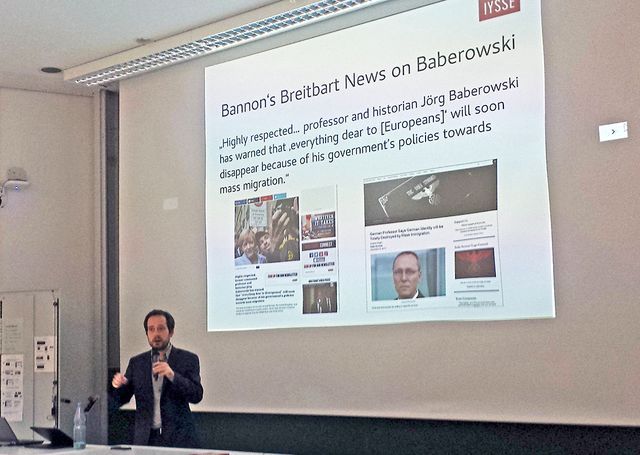 Vandreier then cited a number of quotations demonstrating the reactionary character of Baberowski’s theory of violence. In essence, he justifies social inequality and oppression while advocating military violence and the construction of a police state. On this basis, he argues that “terrorists” should be fought “eye for eye, tooth for tooth.” “Terror can only be met with violence,” according to Baberowski. Baberowski also denounced refugees, which he has described as a “burden.”

One can only understand the vehemence with which Baberowski advances his views in relation to a major shift to the right by the political establishment, Vandreier said. With the election of Trump, nationalism, xenophobia and militarism have once again become politically acceptable in Europe as well. It is therefore no wonder that Baberowski reacted enthusiastically to the election of Trump.

Vandreier pointed out that the far-right US web site, Breitbart News, which was headed for years by Trump’s current chief strategist, Stephen Bannon, had praised Baberowski for his stance against refugees. Similar praise for Baberowski came from the biggest neo-Nazi site The Daily Stormer, as well as the far-right German newspaper Junge Freiheit and the fascist German Democratic Party, NPD.

“It would be no problem for Baberowski to undertake legal action against any of these publications and parties, or to at least publish a comment distancing himself from their views,” Vandreier explained. “Instead, he sued Bremen’s Asta, which dared to criticize his right-wing opinions. Evidently, Baberowski feels at home in such far-right circles.”

At the same time as the political establishment is reacting to the deep crisis of capitalism and the growth of social inequality with a sharp turn to the right, broad layers of the population are moving to the left. The IYSSE has confirmed this development in its own campaign to oppose the ideological preparation for war.

“While the university management, newspapers and professors all defended Baberowski and denounced us, we were able to mobilize masses of students and workers to defend our rights. Every time Baberowski and his allies stepped up their campaign against us, we were able to mobilize more and more support. Now, after trying to deny us rooms and throw us out of the university, he is now trying to sue Asta in Bremen. He evidently has a very ambitious agenda,” Vandreier concluded, to considerable applause. 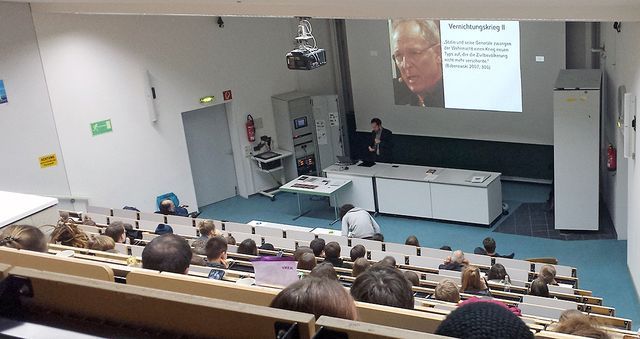 The event at the University of Bremen

After the meeting, students expressed their support for what had been said. One student thanked the speakers “for their excellent presentation.” At the very end, Kyburz read a declaration of solidarity from Professor Frieder Nake, who taught computer science at the University of Bremen and had attended the meeting.

The statement read: “What a thin-skinned teacher this man must be, how underdeveloped is his sense of the importance of the right to free expression, how low must be his opinion of those who seek to draw lessons from Germany’s recent and not exactly distinguished history.” Nake’s statement criticising Baberowski was also greeted with great applause.