UK protesters speak out against Trump

Protesters opposed to US President Donald Trump’s travel ban on people from seven majority Muslim countries entering the US spoke to the World Socialist Web Site at Saturday’s demonstrations in London, Leeds, Sheffield and Manchester. 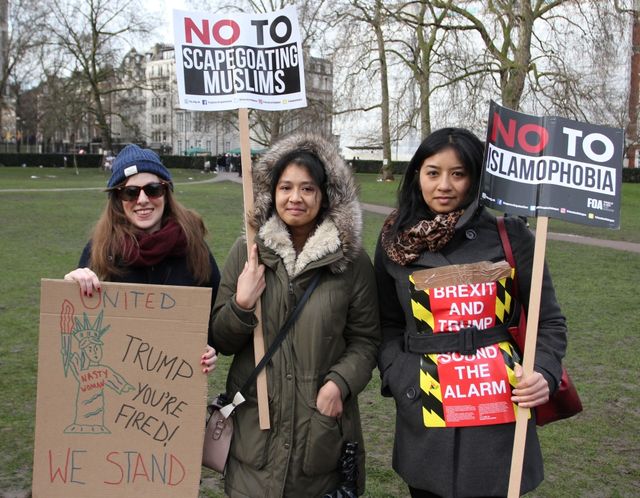 Mary said, “The problems we have go deeper than this one US presidential election. It stems over decades with a lack of any politics that represent ordinary people. What you see in the US, you have the same here. London is a bubble compared with much of the UK so I can understand why people are angry.”

Anna is half-American and half Irish. She had been contacted by her grandmother, who had marched against the Vietnam War, who told her, “You have to get out there now and get on these marches.” 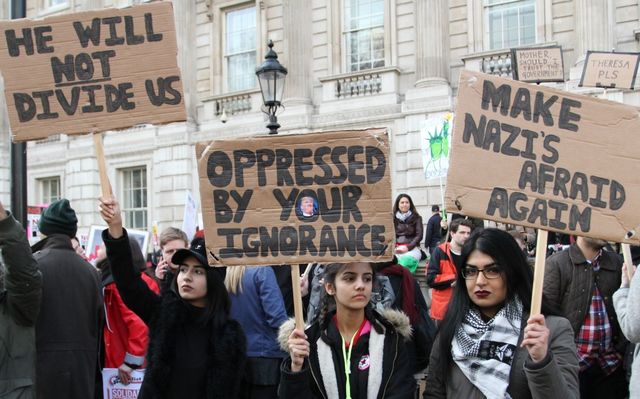 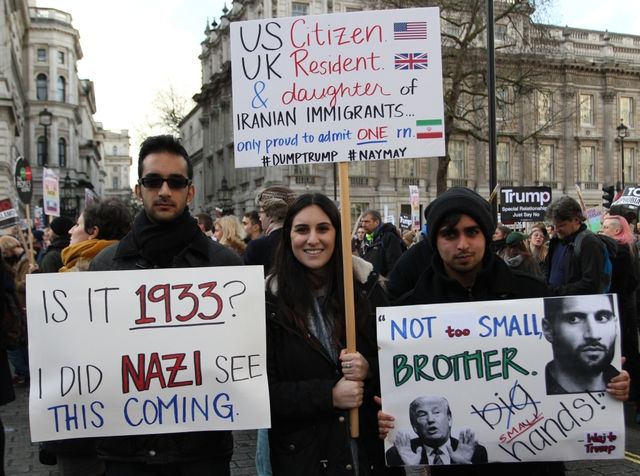 Neda said, “I’m a US citizen and US resident and I come from Iranian heritage. My family came to the US after 1979 only to be discriminated against now. They should be able to live the rest of their life freely and not be ostracised.

“There are quite a few members of my family who came with a Green Card and now they can’t actually leave the US because they are worried they will be stopped on their return. I have family from Iran who have been detained for several hours.

“I’m worried about the new threats on Iran. We are talking about an old culture that goes back before Christ’s time. There are so many important landmarks from history that are at risk now. The people in Iran just want peace and just want to live their lives.”

Asked about the global protests against Trump, Neda said, “It made my heart very full because I don’t want another holocaust, and it’s nice to see Jews, whites, blacks, Muslims coming together to make sure this doesn’t happen again.”

Neda said of Trump’s election, “I see that the very rich have a lot of interests that will be multiplied by Trump’s presidency, and the poor have a big sense of injustice and I think may have thought they would get a sense of release with Trump. But people are now saying, ‘I wish I could redo my vote and take it back as he is not going to be helping us.’ He has already started upsetting the working class.” 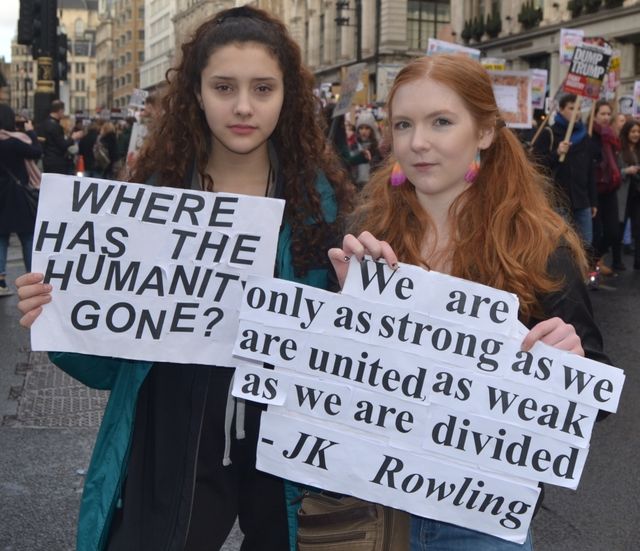 Amelia (right) and her friend Liela

Amelia, a student, said, “With someone as reckless and ignorant as Trump with the finger on the nuclear buttons, it’s dangerous for the entire world. We had hopes in Obama. So did most Americans. He did so many horrible things in the latter part of his presidency. But Donald Trump, we can compare him to Hitler. ... His economic nationalism and protectionism are taking us to the dark days of the First World War and the Second.” 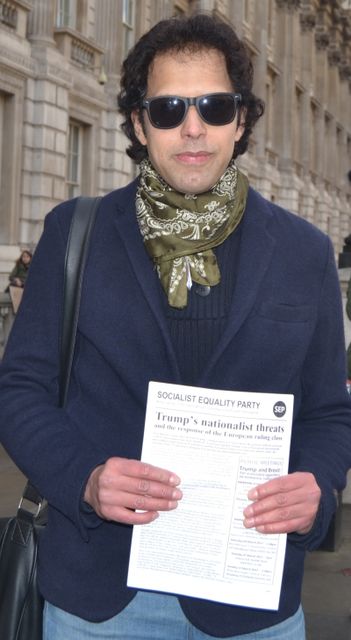 Adheeba, a human rights researcher, said, “I believe that when laws such as the Muslim ban are passed, they go against the constitution and human rights. We need to stand up and start resisting.”

Ishran Khan, a musician, said, “Trump represents the worst sections of the corporate and business world. He is the most hated president in American history.

“Unending wars, drone killings, mass surveillance on the world and attacks on democratic rights have been American policy for some time. It is going to be far worse under Trump. Look at what he is doing to Iran. He sacked the attorney general last week. His threats are not only limited to Muslim people. He is threatening Mexicans, Latinos and immigrants.

“Today if we stand together against capitalism we can defeat the evils that come out of it, not only in America but all over the world.” 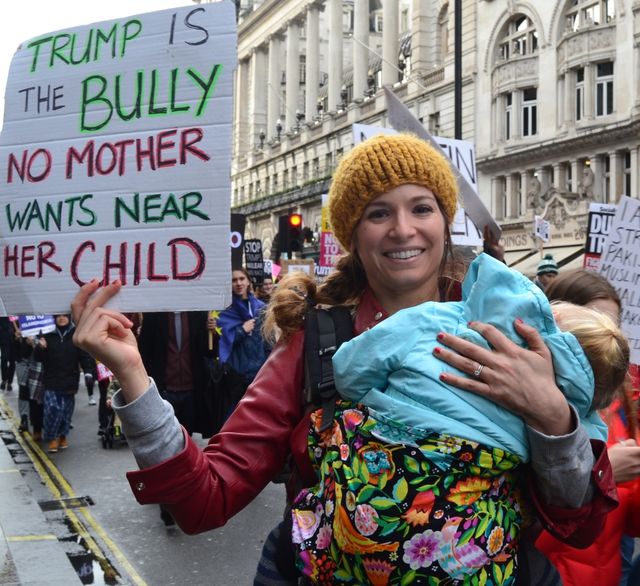 Gavi said, “I have a UK husband born to a Mexican mother and an American father. What is happening in America right now is terrible. The Muslim ban, racism and other economic policies of Trump terrify me. I have got a lot of Iranian friends and his threats against Iran worry me.” 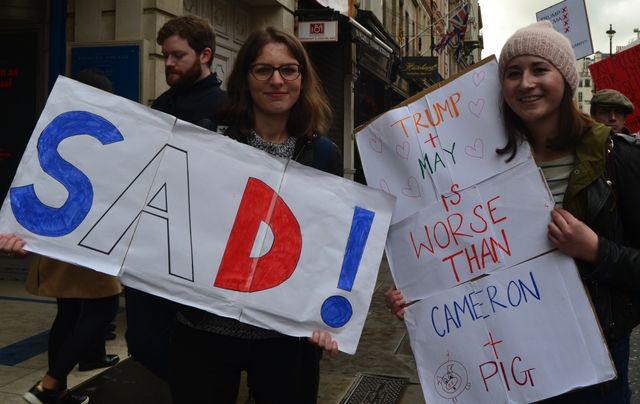 Sosha (left) and her friend Ali

Sosha, a student, said, “We are here to protest against the divisive policies of Donald Trump, whereas Theresa May is building a relationship with him. She is a prime minister that no one voted for.

“Trump is aggressively trying to defend the business interest of corporate America. People need to rise up against him and the establishment he defends. Trump is a product of the capitalist system. He represents the extreme of that system.”

James said, “Being free to travel anywhere one wants to or needs to be is a basic human right.”

Alan said, “I deeply cherish the basic democratic values we have enjoyed since the end of the Second World War.” 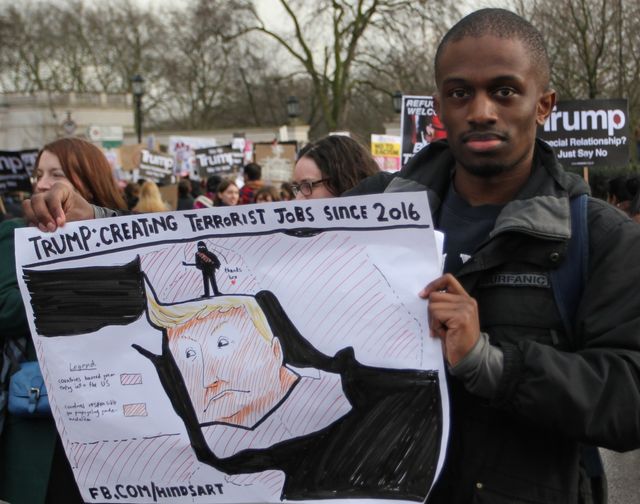 Jacob said, “I don’t think the worst thing about Trump is the sexism or the racism. These are issues but they will be small fry compared with the corporations running riot.

“I think the left needs to take responsibility for its failure to connect with the working class. The left are just like splinter groups from liberalism. The Democrats and liberals are too smug. They did not focus on the economic issues. I don’t think they want genuine social change.” 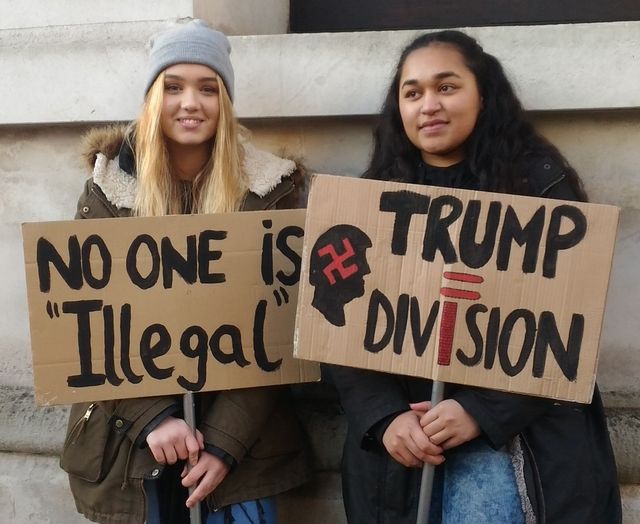 Maria said, “I am against the visa ban. It is discrimination. I am young and I want to be able to travel where I want for finding a job after I finish my studies.”

Delph said, “I don’t like his stance against women in general. I don’t like the fact that he is against abortion. It’s a basic right every woman should have. We have the right to decide when we want to be a mother.”

Tamsin, a student, said, “What is happening in the US is a massive wake-up call and a big warning to anyone who may be complacent and who may have thought that politics doesn’t affect them.

“People have expressed a lot of shock about recent events, i.e., the Trump presidency and Brexit. But they didn’t fall from the sky. There is such an imbalance of wealth and power. The gulf between rich and poor is getting bigger and bigger. I think we are reaching a point where we have no choice but to unite against all these attacks.”

Natasha, Sara, Farnoush, Hemanshi, Ethan and Samia at the protest in Sheffield

Farnoush from Sheffield University joined friends at her first-ever rally: “I’m from Iran and I’ve seen and heard of people who can’t go to the US and see their families and children—so many people. No one likes Trump, especially the younger generation like us.”

Asked whether people saw any connection between Trump’s policies and those of the Obama administration, Samia from Egypt replied, “I think most people saw Obama as a kind of nice guy, but he was probably just as bad as any other American president. There were all of these videos on Facebook, of Obama being goofy, but he’s been murdering people.”

She spoke about the Egyptian revolution in 2011, explaining the military was now back in power: “Basically we are back to square one, or worse than square one. People speak of Trump banning Muslim countries, but he hasn’t banned Egypt. It’s clearly not about religion. ... If you just think about religion then you don’t get to the real interests and what’s clearly beneath the surface.”

Janice said, “I am concerned that Trump is the kind of dangerous person who would carry out the threat to use nuclear weapons. I read that America is upgrading its whole nuclear arsenal.

“Theresa May got very cosy with Trump and if Brexit is going ahead, as looks likely, the plan is to get even closer to the US, and that means Britain will be its number one ally in any war. I agree with what you say about Hillary Clinton being as war-crazy as Trump. I never trusted her. During the presidency of Obama there were conflicts and wars across the Middle East and in Ukraine. That’s amazing, considering he came with such hope after the Bush years.

“I agree with you about the Labour Party. My dad supported them through thick and thin and he would be disgusted the way it’s turning out. ... I don’t think my dad would like me saying this, but it is time for a different party, one that shows real fight for the working class.” 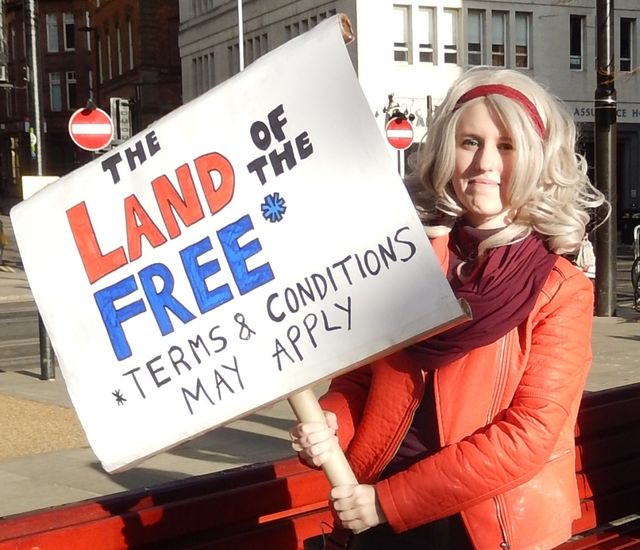 Vanessa, who studies art history, has a lot of friends in the US. “I had believed that it was the land of the free,” she said, “and people came to the US from all over the world to escape terrible situations in the past, to find hope and liberty. What is happening now is denying everything that America was built on.” 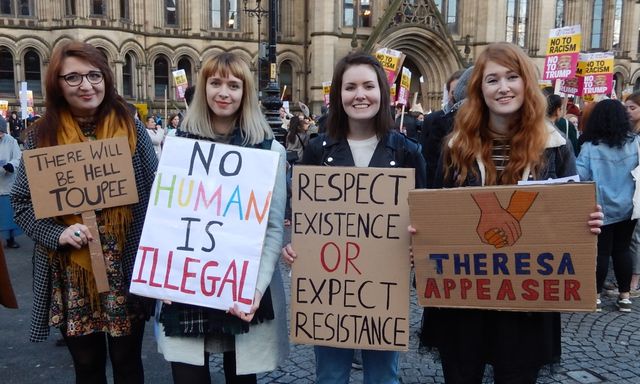 Siobhan from Liverpool said, “I don’t want to live in a world that thinks that having a racist leader in the most powerful nation in the world is okay. It’s not okay and it’s not acceptable.”