Over the past three days, several thousand people participated in demonstrations around Australia against the immigration restrictions imposed by the US administration of Donald Trump, including a ban on citizens from seven Muslim-majority countries entering the US.

Many of those who joined the protests, including students and young people, expressed their hostility to the persecution of refugees by successive Australian governments, the growth of nationalism and militarism, and the onslaught on the social conditions of the working class. 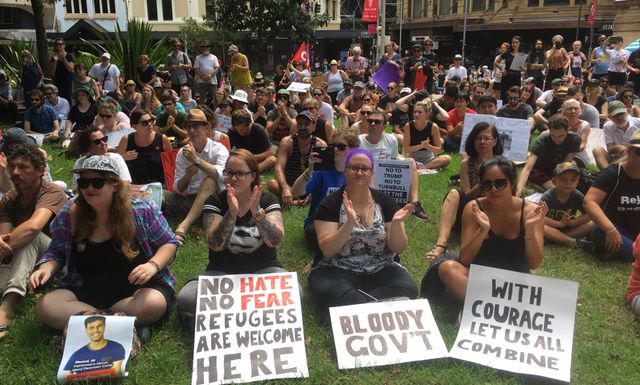 A section of the protest in Sydney

The aim of the protest organisers, however, was to channel these progressive sentiments behind Labor, the Greens and the political establishment, and promote the reactionary line that a more “independent” Australian foreign policy would mark a step forward.

The demonstrations in Sydney and Melbourne were both attended by around 1,000 people. Smaller events were held in Brisbane, Adelaide and Perth.

In Melbourne, Greens leader Richard Di Natale was the featured speaker. He was introduced by Anneke Demanuele, a member of the pseudo-left Socialist Alternative and education officer of the National Union of Students.

Demanuele fawningly declared that Di Natale “has been one of the few voices in parliament to stand up to Pauline Hanson, the racist far-right loser.” Hanson is the leader of the xenophobic One Nation party. Di Natale “led a walk-out during her maiden speech,” Demanuele said. “This is the type of resistance we need to see so we don’t normalise racism in our society.”

Demanuele’s remarks demonstrated how the pseudo-left invokes the danger of the far right to establish closer ties with Labor and the Greens. Like every other speaker, she was silent on the Greens’ record of supporting the former Labor government of Julia Gillard, which sent refugees to detention camps on Manus and Nauru Island in the Pacific, and aligned Australia with the massive US military build-up in the Asia-Pacific, directed against China.

Di Natale restated his earlier calls for an end to the US-Australia alliance. He denounced Prime Minister Malcolm Turnbull for remaining silent “when leaders across the world are condemning the actions of this dangerous president.” He was referring to the self-serving statements of Angela Merkel and other European political figures, who are themselves implicated in the wars in the Middle East and the persecution of asylum seekers.

“It’s time to stand up and say to Donald Trump, our interests are no longer your interests,” Di Natale declared. “It is time to say, no longer does the US alliance protect us, but that it is now a source of danger.

“The nation’s peace and security, indeed the world’s, lies not in the US but in resisting the actions of the US. It is no longer time for appeasement, it is time for leadership. We can no longer leave our security to a mad man on the other side of the world.”

Di Natale’s references to “the nation’s security” made clear that he was speaking as a representative of the corporate and political establishment. His remarks were indistinguishable from a host of worried comments in the financial press, which have warned that the bellicose stance of the new Trump administration threatens Australia’s trading relations and strategic interests. In other interviews and media appearances, Di Natale has called for a “renegotiation” of the alliance.

The Greens have long called for military forces to focus on bolstering Australian dominance in the South Pacific, and have at times voiced concerns over Australia becoming embroiled in lengthy US-led wars in the Middle East. Di Natale’s references to ensuring “our security,” paralleled comments by foreign policy hawk and former deputy secretary of defence Paul Dibb, who issued a call in the Australian today for a major expansion of the defence forces amid mounting tensions in the South China Sea and uncertainties over the Trump administration.

Di Natale’s nationalist line was repeated by representatives of the pseudo-left in Sydney. Ian Rintoul, a leader of Solidarity and the Refugee Action Coalition, stated: “Malcolm Turnbull needs to be told very clearly that we don’t want Turnbull sucking up to Donald Trump. We want a political leadership that will stand up to Donald Trump.”

Rintoul, who occasionally claims to be a socialist, was speaking, no less than Di Natale, as a representative of the “national interest,” i.e., of the interests of Australian big business.

New South Wales Greens MP Mehreen Faruqi called for a “people’s movement of resistance,” while other speakers promoted the lie that limited protest actions could halt the persecution of refugees. A representative of the Construction Forestry Mining and Energy Union, which has carried out xenophobic campaigns against foreign workers, was given the platform to posture as a champion of “multiculturalism.”

For Rintoul and the pseudo-left, the goal is a Labor government that pays lip service to human rights, while pursuing the interests of the corporate elite, and securing “respect,” from other governments, on the world stage. Rintoul’s comments also showed that for the pseudo-left, the bipartisan persecution of refugees is unfortunate, largely because it tarnishes Australia’s “national image.”

None of the speakers in Sydney or Melbourne from the Greens or the pseudo-left even referred to Australia’s central role in US-led wars in Iraq and Syria, which have contributed to the greatest refugee crisis since World War II, or to Australia’s integration into the US military build-up in the Asia-Pacific.

The remarks of two Syrian “community representatives” at both protests confirmed the fact that the pseudo-left milieu, speaking for affluent layers of the upper middle class, supports the wars and predatory intrigues of the major powers. Both hailed the US-led regime change operation in their homeland directed against the regime of Bashar Al-Assad.

In Melbourne, Monther Alhamdoosh obscenely declared that the Syrian government was “much worse than Trump.” He appealed to the new US administration, stating: “Mr Trump, if you have a good intention and want to put America First, stop the Syrian regime and its government officials from entering the US.”

In Sydney, Mukhtar Jansiz denounced Iran and Russia for supporting the Syrian regime, declaring they were “terrorist” states and using language indistinguishable from the most hawkish sections of the US military establishment. He called for an expansion of US wars in the Middle East, stating that if the US and Australia “don’t want Syrians as refugees in your countries, help them to get rid of the dictator and his regime.”

In opposition to the nationalist line-up at the protests, Socialist Equality Party campaigners warned of the dangers of military conflict, and called for the development of an international anti-war movement based on a socialist program.