Opposition is mounting to the threat by Michigan’s State Reform Office (SRO) to close as many as 38 schools by the end of the school year for “non-performance.” The threatened closures would have a devastating impact on communities and students, many of which would be forced to travel long distances to alternative schools.

The closure threat is the product of a right-wing attack on public education long championed by Michigan billionaire heiress Betsy DeVos, who was recently installed as Trump’s secretary of education. Under a 2009 state law schools ranked in the bottom five percent on standardized tests for three years in a row can be closed. Another 35 schools are targeted for state intervention and could face closure at the end of the 2017-18 school year.

The schools are in poor and working class neighborhoods with the majority in Detroit. If implemented, the closures would impact 53 schools in the city, nearly half of the schools in the newly formed Detroit Public Schools Community District (DPSCD). 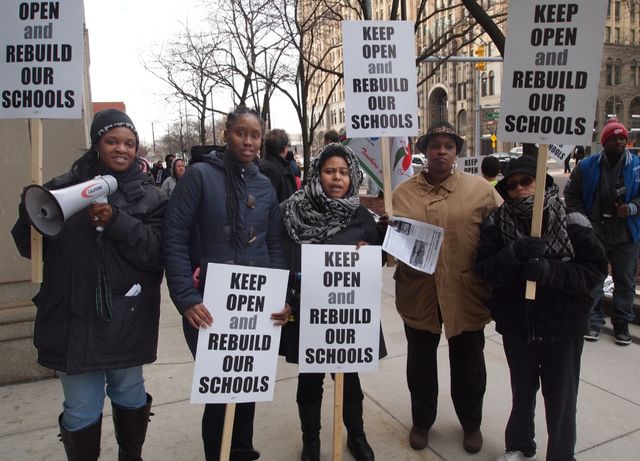 The board of the DPSCD has retained the services of a law firm and has said it will take legal action against any attempt to close schools in the city. School districts in the city of Kalamazoo and Saginaw are likewise threatening lawsuits if the state goes ahead with plans to close schools.

The current crisis is the product not only of the pro-privatization legislation pushed by DeVos, but of decades of defunding of public education by both Democratic and Republican administrations. Michigan officials have carried out one round of school cuts after another and closed hundreds of schools.

Parents and teachers spoke out against the threatened school closures at a series of town hall meetings over the past week called by local officials to vent and dissipate growing public opposition. At an “Education Town Hall Meeting” last week in Detroit members of the audience continuously interrupted state officials as they discussed the planned school closures.

Hundreds of Kalamazoo parents, teachers and students also attended a public forum last week to voice opposition to the threatened closure of two schools in that city. A petition by Kalamazoo residents against the closures has garnered close to 2,000 signatures.

Some 150 parents, students and teachers attended a rally in Detroit Friday against school closures, which was called by local Democratic and teachers union official. While parents and teachers attending the rally expressed a determination to fight, many of the speakers heavily promoted the conception that public education attacks were fundamentally a question of race. 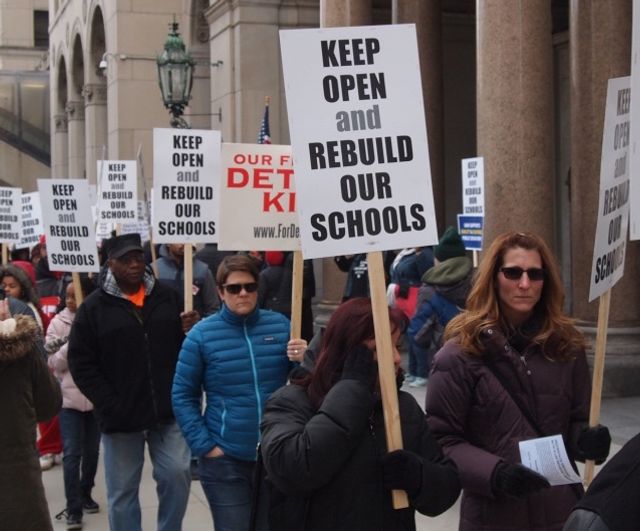 The focus on race has long been used by the Democratic political establishment in Detroit to divide the working class and divert attention from the more fundamental class issues involved in the assault on public education taking place nationwide. It is being used to deflect attention from the critical role played by the Democratic Party at every level of government, including the Obama administration, which oversaw the destruction of 300,000 public school employee jobs, scapegoated teachers and sharply expanded the publicly funded and privately run charter school industry.

The Democrats, the Detroit Federation of Teachers and the Obama administration joined Republican Governor Rick Snyder last year to subvert and ultimately halt protests by Detroit teachers against the breakup of the Detroit Public Schools and deplorable learning conditions. In the aftermath of the dissolution of the district, state lawmakers imposed new anti-strike penalties on educators.

The World Socialist Web Site spoke to several of those attending the Friday protest in Detroit. A parent from Osborn High School said, “It is devastating. It is creating a crisis. It is taking away from our students’ possibilities. Our students are leaving.”

Osborn High School contains a cluster of three academies, all of which are targeted for closure by the state of Michigan.

The parent continued, “The two schools nearest to Osborn are also on the list of closures. If Osborn closes, the nearest school is 40 miles away.”

Her friend, Roquesha, added, “We have students who want an education. We need investments. If they close our school, it is miles to the nearest school.

“This is a Michigan-wide problem. There are also other school districts in trouble. They want to take away public education and have all charters. The charters can pick and choose the students they want. We want public education for all.”

Leah, a social work student at Wayne State University, said, “I don’t agree with school closings. I don’t think students should have to drive miles and miles to go to good schools.

“I don’t agree with the system of basing the funding of education on the property tax. I think all kids in America should have good schools.” 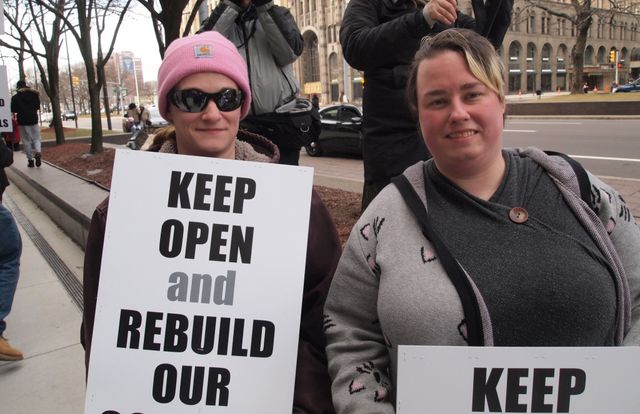 Sarah, a teacher at Ben Carson High School, said “They shouldn’t be closing schools—30,000 students could be affected. That is an awful lot of charters. They don’t say it openly, but that is what is happening.

“Detroit once had 300 buildings. Now it is down to 100. The rest have gone to charters or to scrappers.

“Any school closure affects my building. People leave the district and don’t come back. When you close a school, you lose 20-25 percent of the population in the area. Last year we had many families pulling out of the district.”

A young teacher at Osborn said the conditions that existed in her school were atrocious after years of budget cuts, neglect of repairs and endemic poverty in Detroit, the poorest big city in America.

“They just found mold in our locker rooms. They have shut down our gym. We need a clean building and transportation for our kids.

“We have attendance problems and behavior problems because children come from poor neighborhoods. There are social and emotional stresses. It is hard to teach a kid when he hasn’t had breakfast. When the whole community is under stress kids can’t do well.”

Stephanie, a parent at Paul Robeson Academy, said, “My school isn’t on the list, but if you attack one, you attack all. Public education is a foundation. It is fundamental to neighborhoods and communities.”

Asked what she thought was behind the attack on public education, she replied, “It is about profit—money. You take from the weakest first.”