After one month of the Trump administration, protests continue across the US

Demonstrators turned out in the thousands in cities throughout the US for the fourth weekend in a row since the inauguration of Republican President Donald Trump to express their hostility to the reactionary policies being implemented by his administration, foremost the attack on immigrants and refugees.

Protests called to oppose the Trump administration’s attacks on immigrants and Muslim refugees drew thousands in Chicago and New York City on Sunday and Los Angeles and San Diego on Saturday. Thousands also gathered Sunday in Boston to oppose the government’s threats to scientific research and funding.

This weekend’s protests come after the “A Day without Immigrants” nationwide protests on Thursday, which closed thousands of restaurants and businesses nationwide. Parents also kept their children home from school, resulting in a number of school closings. There was significant participation in demonstrations in New York City, Atlanta, Detroit, Washington DC, Philadelphia, Los Angeles and Austin, Texas.

Reports emerged over the weekend that scores of workers have been fired or victimized for refusing to work on Thursday in solidarity with the anti-Trump protests.

Twenty-one workers were terminated from Encore Boat Builders in Lexington, South Carolina after they stayed home. At least 30 masonry workers employed by JVS Masonry on a job site in Denver, Colorado were terminated when they informed their boss they would not be working Thursday, while 18 workers lost their jobs at Bradley Coatings in Nashville, Tennessee. Dozens of school employees and restaurant workers also report being fired.

Thousands of people are expected to protest again today in rallies billed as “Not My President’s Day” in Washington DC, Los Angeles, New York City and Chicago as well as at smaller gatherings in at least two dozen other cities, including Salt Lake City, Utah; Greensboro, North Carolina; Rapid City, South Dakota; and Kansas City, Missouri.

WSWS reporters spoke to some of those who turned to protest on Saturday and Sunday in San Diego, Los Angeles and Chicago.

Signs at the San Diego in support of immigrants

At least 2,000 protesters marched in downtown San Diego on Saturday in a rally to defend immigrants organized by the San Diego Activist Network and a host of other groups that operate in the orbit of the Democratic Party.

Little or no criticism was made of the Democrats by the speakers on the official platform, except for the ritual call to put pressure on the political establishment. Outside of members of the Socialist Equality Party who intervened at the protest, there was never an explicit call to break with the Democrats and Republicans.

Harry, a worker, told the WSWS, “The Democrats and Republicans are the different sides of the same coin. If the Democrats really wanted to do something they should have done something the past eight years, especially when they had control of both chambers.”

Doug, himself an immigrant to the US, expressed his support for immigrants and refugees. “This is a global society,” he said. “We have been for a while now; we’re not turning back. People are traveling back and forth between countries on a daily basis. I’m not a very politically educated person, but I think a lot of people are going to start coming out in support now.”

A section of the protest in Los Angeles

More than 2,000 demonstrators marched a mile to city hall in downtown Los Angeles on Saturday to voice their grievances. The protest was followed by a “United for America” rally at the Islamic Center of Southern California in downtown and another rally is scheduled to begin Monday morning at city hall.

The protests follow a series of ICE (Immigration and Customs Enforcement) raids throughout the greater Los Angeles and Southern California areas.

Organizers of Saturday’s “Free the People Immigration March/Sanctuary for All” included in their list of demands “an immediate stop to ICE raids and deportations” as well as a demand that Democratic Mayor Eric Garcetti officially designate Los Angeles as a sanctuary city.

Garcetti in fact stated last Monday that Los Angeles was not a sanctuary city, defensively explaining that local police regularly turn over individuals to federal authorities with a warrant. The mayor’s remarks only underscore the fact that no possibility exists to oppose the Trump administration’s attacks on immigrants within the confines of the Democratic Party, whether they inhabit either the local or national stage.

Reporters from the World Socialist Web Site spoke to several participants at Saturday’s rally. In opposition to the rally organizers’ plan of pressuring local Democratic Party members, many in attendance agreed with the perspective of uniting workers of all nationalities in a common struggle against capitalism as the only means of stopping the attacks on immigrants.

Azita, an art therapist originally from Iran, expressed her solidarity with both those who were blocked from traveling to the United States from her own country and with Mexican workers who were being unjustly blamed for the crisis of the capitalist system.

“Trump’s actions are horrible,” she said. “They are saying to entire peoples that you must be a terrorist or a gang member because of what you look like or the language you speak. They are trying to get rid of presumption of innocence. They are trying to isolate us from one another and we need to stop it.”

“I’m in support of these protests. Luckily myself and my immediate family are all citizens, but I know so many others, friends and many of my students who could all be potentially affected by this,” she said. “So many of my students are really worried that they may go home from school one day only to learn that they might never see their parents again because of an immigration raid.”

Demonstrators against Trump in Chicago

On Sunday, the ANSWER (Act Now to Stop War and End Racism) Coalition, Socialist Alternative, the Party for Socialism and Liberation, along with various gender and race-based organizations around the Democratic Party, held a rally in front of the Trump Tower in Chicago, one of the US president’s luxury hotels.

While the event was attended by a significant number of young people and many genuinely interested in the defense of the democratic rights of immigrants, the politics that dominated the event from the platform of the rally were shallow and entirely conventional.

The pernicious influence of the Democratic Party’s pro-war political line was also evident in a significant number of anti-Russian protest signs. Drawing the connection between Putin and Trump’s presidency in this way takes as good coin the evidence-free campaign waged in the media to attribute Trump’s victory to “foreign meddling,” thus removing any blame from the Democrats for losing the election and paving the way for war with Russia.

Tom, from Austria, said he came to the rally because he was “outraged at all the cabinet nominations, and taking off all the regulations, and all the disrespect to human beings,” adding, “I’m very alarmed with where this is going.”

When asked what he thought about the anti-Russia campaign in the media and the danger of war, he said, “I’m more focused on the home front, and environmental regulation, but absolutely, that’s super scary too.”

Chris, an engineer from Bulgaria, interjected, “Isn’t that the focus though, because you create this destabilizing regime change, in Russia or in China, and then you can do whatever you want at home, under the premise of, ‘We’re at war.’” 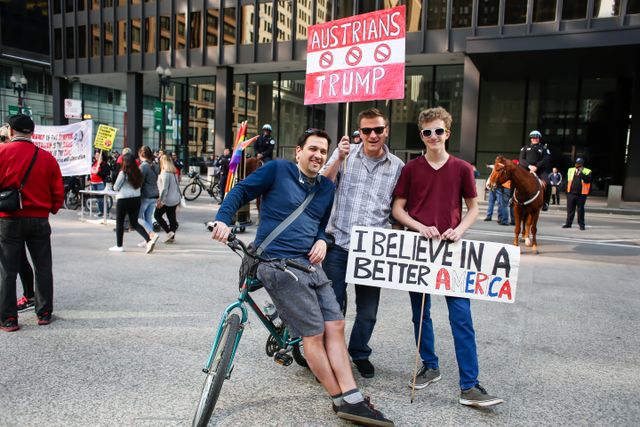 Hope, a graduate student at Northwestern University, said she came to the protests to voice her opposition to capitalism and expressed her interest in socialism. She said, “I grew up protesting almost every presidency from an antiwar perspective. I lived in Denmark for two years, so I’m interested in socialism. Trump’s administration is dangerous, fascistic and racist. The John Kelly memo on immigration—it’s appalling. I read that they want to create new deportation criteria. But it doesn’t surprise me that the Democrats and Sanders also voted for John Kelly.

“I used to be a legal assistant to attorneys that deal with immigration rights. I also went to a lot of rallies against Obama’s anti-immigration policies. But it’s looking like today with the Trump administration there is a rapid acceleration. My grandmother was a Holocaust survivor and as a Jewish person, it’s looking a little too familiar to that period in history. The implications of the anti-Russia policies seem to be dangerous if it results in war.”

Patrick chimed in, “I care about labor and workers’ rights a lot. I think we have to strike back and organize. I also don’t really support the Democrats at all. The anti-Russia campaign of the Democrats seems to me like a real distraction. Because I think the problems in the US would still be there without Russia.”

When asked by Hope what the alternative was today, a WSWS reporter stated, “We have to build an international, antiwar, socialist movement of the working class.” Hope replied, “I’m in! I want to learn more.”