Thousands of people once again turned out across the US on Monday to protest the right-wing policies of the Trump administration.

The protests were billed by organizers as “Not My President’s Day,” a play on the President’s Day federal holiday marking George Washington’s birthday which fell on Monday. While the protests drew several thousand people in New York City and a thousand people each in Chicago and Los Angeles, the crowds were noticeably smaller than other anti-Trump protests that have occurred in the last four weeks. 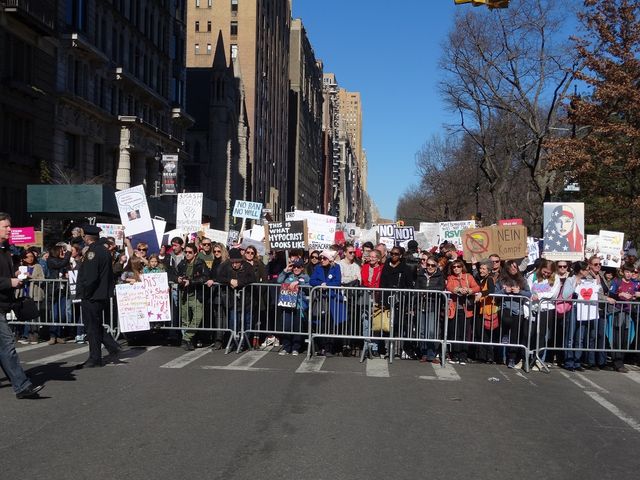 A section of the protest in New York City

The one month since Donald Trump was sworn in as the 45th president of the United States has been marked by almost daily protests in cities large and small across the US and around the world. The first major protest, called as the “Women’s March,” drew millions of protesters into the streets in cities around the world on January 21, Trump’s first full day in office.

Last Thursday saw “A Day without Immigrants” protests in which thousands of immigrant workers and supporters stayed home from work and school, resulting in the closure of hundreds of businesses. Thousands of people turned out in a number of cities over the weekend, including Los Angeles and San Diego, to oppose the Trump administration plans to deport millions of immigrant workers. Tens of thousands marched in Milwaukee, Wisconsin last Monday to oppose plans to deputize county sheriffs as federal immigration enforcement agents.

The Democratic Party and liberal media’s efforts to redirect mass popular opposition to Trump’s anti-democratic and anti-immigrant policies in a right-wing, pro-war direction by pushing unsubstantiated claims that Russia “hacked” the election in favor of Trump, and that Trump coordinated his campaign with Moscow, found some expression in Monday’s protests.

In downtown Chicago, demonstrators gathered Monday across from Trump Tower for the second day in a row. The crowd, estimated at about 1,000, was somewhat smaller than the previous day’s protest.

Many of the protesters bore signs expressing their opposition to Trump’s attacks on immigrants and refugees, his right-wing cabinet picks, and his pro-corporate agenda. However, as with Sunday’s demonstration, a minority centered their attacks on the unsubstantiated claims of Russian influence in the election, reflecting the impact of efforts by the Democratic Party and the national security apparatus to channel opposition to Trump behind a pro-war agenda.

A supporter of the Socialist Equality Party was able to address the rally, and was alone among the speakers in calling for a break with both big-business parties: “Not a drop of confidence or support can be placed in the Democratic Party, that pack of cowards, co-conspirators and liars,” he said. “The Democrats do not stand in opposition to the Trump administration, but are complicit in its crimes. It was Obama who said, after the election of Trump, that both parties, Democrats and Republicans, are ‘on the same team,’ and wished Trump ‘every success.’ 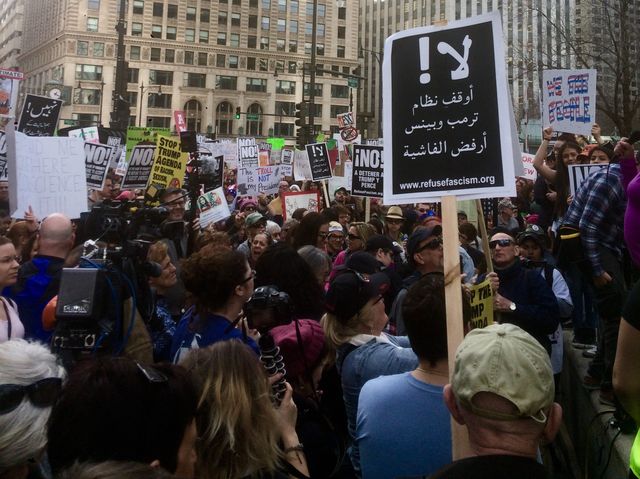 Part of the demonstration in Chicago

“Right now, the Democrats, including those who are nominally ‘left-wing’ such as Elizabeth Warren and Bernie Sanders, are attempting to whip up an anti-Russian hysteria, to convince the American public that we should go to war with Russia, a war that could possibly lead to nuclear destruction of the planet.”

Reporters for the WSWS also spoke with a number of attendees.

Jodie, a graduate student, said, “I mean, Obama was deporting millions of immigrants, and the fact that Trump is trying to ramp that up with the Muslim ban is just ridiculous.”

When a WSWS reporter referred to the recent report that the eight richest billionaires control as much wealth as the bottom half of the world’s population, Jodie noted, “That’s what people at these protests are reacting to, but they don’t realize it yet.

“I don’t think Trump’s economic policies are a departure from the capitalist system. In an ideal world, we would have a radical redistribution of wealth.”

Karen, a small business owner from Chicago, expressed opposition to Trump’s nationalism and chauvinism, saying, “For me, Trump represents everything that’s wrong with America, that section that believes in racism and isolationism, and I don’t believe that. We’re a global nation and it’s a global world and everyone is welcome here. There shouldn’t be these kind of policies. I don’t think anyone should have the right to control anyone’s bodies, and I don’t think anyone should control who comes in and out.”

Sophia, a computer programmer, noted that Obama had provided the framework for much of Trump’s anti-immigrant policies. She said, “That’s something that I had struggled with at a previous protest. Everyone was there to oppose Trump, but somebody was there who was very vocally a proponent of Obama, and I kind of got into it with him.”

“I think Trump is definitely a product of capitalism and American society,” she said. “Capitalism is just a really harmful system.”

Several thousand rallied in New York City Monday, filling a half mile stretch up from Trump International Hotel and Tower along Central Park West. Similar to other recent large demonstrations, protesters expressed widespread hostility to the policies of the Trump administration and a determination to fight back.

Placards denounced the president as a liar and a fascist, and called for his impeachment. Many also criticized Trump for his alleged ties to Putin, in line with the relentless campaign by the Democratic Party and the media in recent weeks.

Hampton, a worker at a local bookstore, told the WSWS, “I think we are living in an intensely flawed system, and it has allowed far-right-wing movements like Trump to sweep across the industrialized world.

“The current situation impacted me particularly. I’m from a Latino community outside of Houston. You can see that people are afraid there about losing their jobs, and if one person is deported it impacts the entire family. It is really concerning when the delusions of one individual like Trump can impact so many people.”

Asked about the Democratic Party’s allegations of Russian influence over Trump, he added, “I don’t think what they are doing is useful. They are attempting to play off the same xenophobia and nationalism that Trump was able to tap into, and it is like modern McCarthyism.” 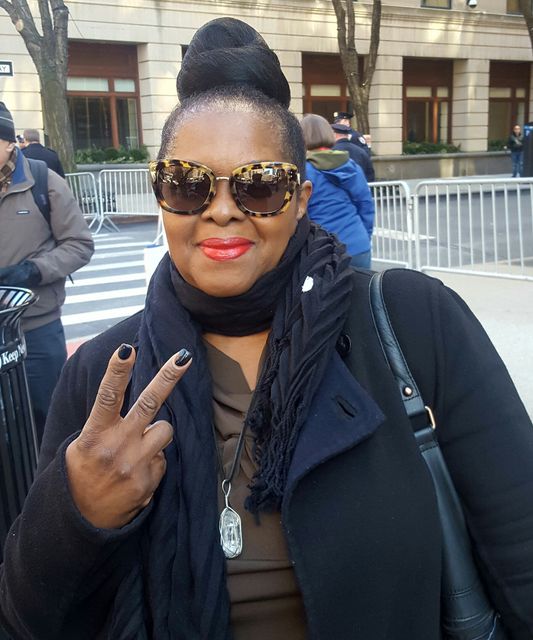 Sarah, a recently unemployed worker, said, “I came here and I went to the Women’s March because this man [Trump] represents everything wrong with America. He is the antithesis of diplomacy. He is not a politician, and honestly I don’t even think you have to be a politician, but all he cares about is big business.”

While Sarah said she thought that Russian hacking influenced the election, she added, “The Democrats did not get everybody involved. They took us [Democratic Party supporters] for granted, and they are not fighting on issues people care about. I even said if Hillary didn’t win I would have to reevaluate the party. It is clear that the Democrats of today are not the Democrats my father supported.”

Sydney, a political science and gender studies student, came with a group of students from Pace University in lower Manhattan. “We have been to other protests. I identify as a socialist. To get change, we need to change the system. This system created Trump. A lot of people here are upset Hillary is not the president, but she was for neo-liberalism. A lot of protests organized by students were more radical. It is unfortunate we have Trump but he will create more protests, especially from marginalized groups.”