By our correspondents
1 April 2017

The Socialist Equality Party (SEP) in Sri Lanka and the International Youth and Students for Social Equality (IYSSE) held a picket in downtown Colombo, Friday afternoon to popularize the demand for the immediate freeing of the 13 Maruti Suzuki workers that the Indian state has jailed for life on trumped-up murder charges.

The SEP/IYSSE picket was organized as part of the International Committee of the Fourth International’s campaign to mobilize the working class in India, South Asia and around the world against the frame-up of the Maruti Suzuki workers.

Last month a court in the northern Indian state of Haryana found the 13 workers guilty of the death by asphyxiation of a company manager in a fire, although the prosecution failed to prove any connection between the workers and the fire, and the judge in his verdict had to admit that police had illegally colluded with the management of the Japanese-owned automaker and fabricated evidence against the workers.

Twelve of the 13 were elected officers of the newly-founded Maruti Suzuki Workers Union (MSWU). Workers at Maruti Suzuki’s car assembly plant in Manesar, Haryana had established the MSWU in a bitter struggle against a government-recognized, pro-company union.

Close to a hundred SEP and IYSSE supporters participated in yesterday’s picket. A sizeable delegation of Tamil-speaking supporters travelled from the war-ravaged north to Colombo to show their support for the Maruti Suzuki workers. Tamil-speaking plantation workers from the Hill Country (central highlands) also joined the picket. 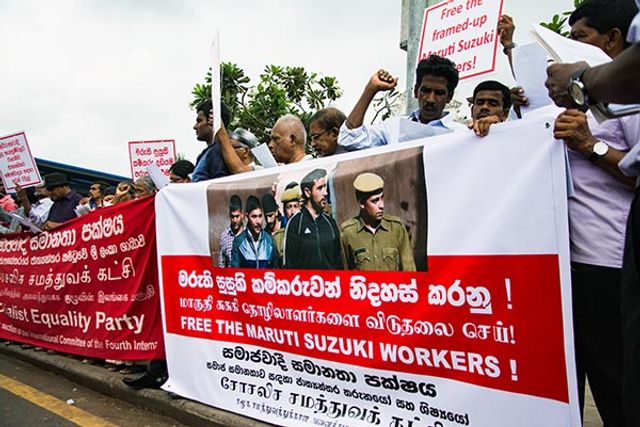 The protest was held outside the Fort Railway Station, Colombo’s largest. It lasted more than an hour and attracted the attention and interest of workers and youths who were returning home after finishing work or school. Before and during the picketing, SEP and IYSSE supporters distributed copies of statements issued by the International Committee of the Fourth International (ICFI) and Sri Lankan SEP calling for the mobilization of the industrial and independent political strength of the international working class to win the freedom of the Maruti Suzuki workers. They discussed with workers and youth the significance of the company-state witch hunt against the Maruti Suzuki workers and how it exemplifies the assault on the rights of workers all over the world.

Picketers displayed a banner reading “Free the framed-up Maruti Suzuki workers!” in English, Sinhala and Tamil, and carried placards, which read “Unite to defeat the witch hunt against the Maruti Suzuki workers,” “Forge the international unity of the working class,” “Fight for international socialism against imperialist war plans,” “Fight for international socialism against the assault on social and democratic rights,” “For a Union of Socialist Republics in South Asia” and “Build the revolutionary party of the working class”.

Picketers raised slogans demanding the immediate release of the framed-up Maruti Suzuki workers and the reinstatement of the more than 2,300 militant workers the company purged and replaced in 2012. They denounced the war plans of the US and the other imperialist powers, the global capitalist elite’s promotion of chauvinism and turn to state repression, growing joblessness and the assault on workers’ rights and called for the working class to take up the struggle for socialism.

The SEP/IYSSE picket had been publicly announced by the World Socialist Web Site. It was also advertised though a postering campaign in Colombo and its suburbs. Police were deployed to surveil the protest, but they did not intervene, as such a move would have drawn attention and opposition from the large numbers of workers and youth transiting through the area. 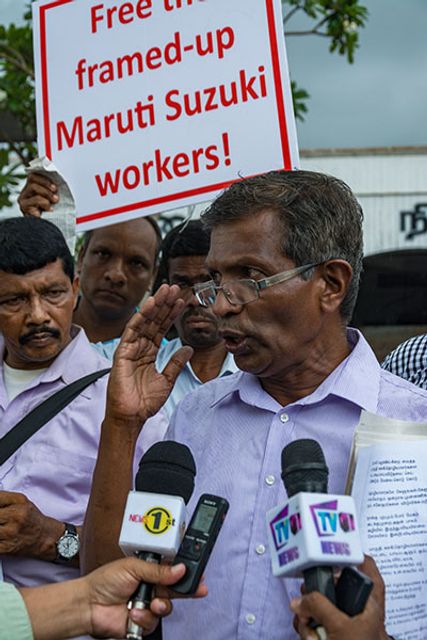 SEP/IYSSE members set up facilities to get passers-by to sign the ICFI-launched online petition demanding the immediate freedom of the Maruti Suzuki workers during the picket and won significant support.

At the conclusion of the event, SEP Political Committee members, W.A. Sunil and Thevarajah briefly addressed the gathering, speaking respectively in Sinhala and Tamil. They explained that the frame-up of the Maruti Suzuki workers was the outcome of a joint-conspiracy involving company management, the police, judicial authorities, and political establishment, including Haryana’s then Congress Party-led state. “The workers only ‘crime’,” declared Sunil, “was to have fought against the against slave labor conditions maintained by the transnational company.”

The SEP speakers explained how Maruti Suzuki management had mounted a provocation against the workers on July 18, 2012 and deployed hired thugs to attack them on the factory floor. In the midst of this altercation a fire mysteriously erupted that resulted in the death of Awanish Kumar Dev, a company human resources manager. “Seizing on the fire and the death of this manager, who was known to be sympathetic to the workers,” explained Thevarajah, “13 workers have been convicted and sentenced to life imprisonment on frame-up murder charges.

The speakers exposed the trial of the Maruti Suzuki as a legal travesty, noting among other things that prosecution witnesses systematically failed to identify those they had implicated and that the judge repeatedly mangled the law, shifting the onus of proof from the state to the workers. “The verdict against the workers was clearly politically-motivated,” declared Sunil. “It was a clear message to foreign investors that Modi and his (BJP) government will ruthlessly suppress worker opposition to sweatshop conditions and cheap labor. And on the other hand, it was meant as a warning to the entire working class that the government will brutally suppress any challenge to poverty wages and contract labour.” 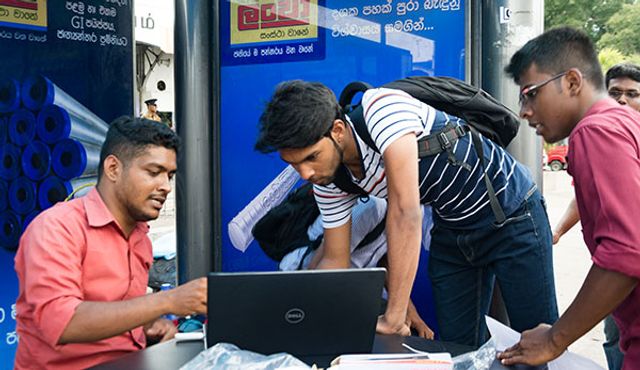 Explaining that the frame-up of Maruti Suzuki workers is not an isolated Indian phenomenon, Thevarajah said, “It is a part of a social counter-revolution being implemented by the bourgeoisie worldwide under conditions of the growing crisis of global capitalism.”

The speakers pointed out how the newly-inaugurated Donald Trump administration in the US, governments across Europe, and the Sri Lankan ruling elite, under ex-President Rajapakse and the current Sirisena-Wickremesinghe government, have carried out sweeping attacks on the social and democratic rights of working people. “The only way to defeat such attacks,” they declared, “is through the international unity of the working class.”

They concluded by calling on workers and youth in Sri Lanka to join with their class brothers and sisters internationally in fighting to free the framed-up Maruti Suzuki workers, to support the international defense campaign launched by the ICFI, and to attend the public meeting that the SEP/IYSSE are holding on Tuesday, April 4 at Colombo Public Library Auditorium to promote this vital campaign.