An estimated 2,000 workers around New Zealand from KFC, Pizza Hut, Carl’s Jr and Starbucks restaurants walked off the job at midday on Saturday over employment contract demands. The two-hour stoppage by about half the company’s workforce forced many of the stores, which are owned by Restaurant Brands, to close. The strike was called by the Unite union, which covers predominantly young workers in the retail, fast food and entertainment sectors.

Large and enthusiastic pickets outside stores in the main centres attracted much attention with passing cars tooting their support. In Auckland, up to 70 people picketed the Balmoral KFC on Dominion Rd, blocking drive-thru access to the store. The St Luke’s KFC was also shut down. In Wellington, more than 30 workers picketed the KFC outlet on Kent Terrace, which was closed, while the Johnsonville KFC shut its front counter. In Christchurch, Starbucks Riccarton and Hornby KFC were closed. 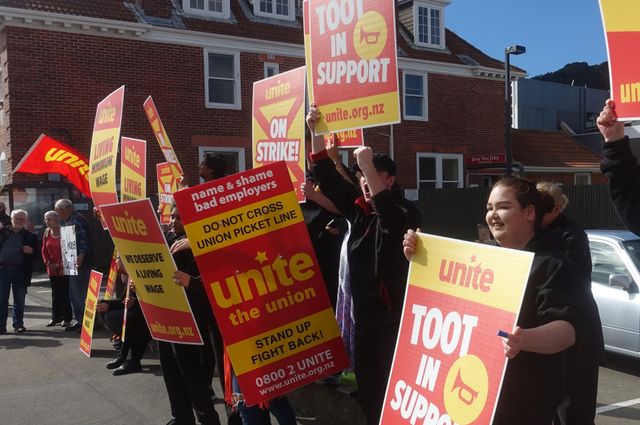 A picket in Wellington

At the Carl’s Jr outlet in the Bush Inn Shopping Centre in Christchurch, workers preparing to walk out were locked inside the store for an hour while management waited for an on-call relief employee to arrive. The union accused the restaurant’s manager of taking the workers hostage. In a video shared on Facebook, Carl’s Jr workers were shown behind locked doors, and customers unable to get in.

Workers voted to strike after Restaurant Brands refused a pay rise of 10 cents an hour each year, for three years. The claim is intended to eventually increase workers’ pay to 30 cents above the minimum wage, currently set at $15.75 an hour for adults, and $12.60 for new hires and trainees, by 2019.

Restaurant Brands last week announced a profit of $NZ26 million after tax in 2016, up $1.9 million from the previous year. Unite union national director Mike Treen said “we need to show we’re serious. Our three main concerns are getting workers off the minimum wage, getting supervisors onto a living wage, and pay equity.”

KFC supervisors are paid $1.80 an hour less than cooks, who received a $2.50 pay rise last year. Unite also accused Restaurant Brands of refusing to pay redundancy. Workers are given one week’s notice if they are fired. In December, KFC announced it was to shut its Kaikohe outlet in the impoverished Northland region, with no payout, three weeks before Christmas.

According to Unite, Restaurant Brands has had significant staff shortages over the past year. Many workers have had long and demanding shifts. Despite this many skilled and experienced workers still rely on the government’s Working for Families tax credits and accommodation supplements to make ends meet.

Restaurant Brands’ chief executive Russel Creedy said the company had made Unite a “generous” offer of a flat 50 cents above the minimum wage after 10 weeks on the job. The union rejected the offer, saying it would require 400 hours’ work, which many part-time workers would struggle to achieve. Many would simply quit.

Unite national secretary Gerard Hehir said; “These are not school kids. They are qualified and experienced workers, who can run a store on their own—managing staff, managing a retail store and a food production facility. They deserve a living wage and Restaurant Brands can afford to pay them a living wage.”

In fact, 10 to 30 cents an hour above the legal minimum is far from being a “living wage.” Hehir described the claim as “a very modest proposal” that would close the growing gap between rich and poor “a little bit.” A Unite site delegate at KFC in Wellington, also on the union’s bargaining team, echoed the leadership’s line. She told the WSWS that the 10 cents claim was “a fair ask … Saying that Restaurant Brands is not a minimum wage employer would be awesome.”

In reality, the derisory claim will only serve to further entrench poverty level wages among the youngest and most vulnerable section of the workforce. The contract claim and limited industrial campaign is in line with Unite’s history. It postures as a “radical” and “campaigning” union while acting to corral young workers around the union bureaucracy and Labour Party. All the trade unions, including Unite, have been instrumental in assisting the ruling elite to depress the wages and living standards of the working class.

In a 2006 deal with McDonald's, the company agreed to pay every union member a lump sum equal to 1 percent of their quarterly earnings every three months, effectively paying the union fees for Unite members. According to then Unite director Matt McCarten, it was an arrangement in which “everyone wins.” The company in effect granted Unite a franchise to recruit members—a vote of confidence in the union’s ability to keep young workers under control.

Led by Treen, a former leader of the Pabloite Socialist Action League, Unite has conducted high-profile campaigns to pressure the government to remove youth pay rates and “zero hours” contracts. But the fundamental position of young workers in poorly paid, insecure and highly-exploited work remains unchanged.

Like other unions, Unite has lined up with the nationalist anti-immigrant policies of the Labour Party, the Greens and New Zealand First. The union lobbies government agencies to prevent employers from bringing in overseas labour.

Treen boasts on the Unite web site that after a major dispute to get its first agreement with Restaurant Brands in 2005-6, “we have successfully negotiated without the need to take strike action.” Generally, he notes, “the company saw sense in the end on the important issues. They were the first to agree to guaranteed hours in 2015 for example. While the union had secured slightly better wages and conditions at Restaurant Brands than the other companies, “there was a limit on how far ahead we could force the company to go,” Treen comments. 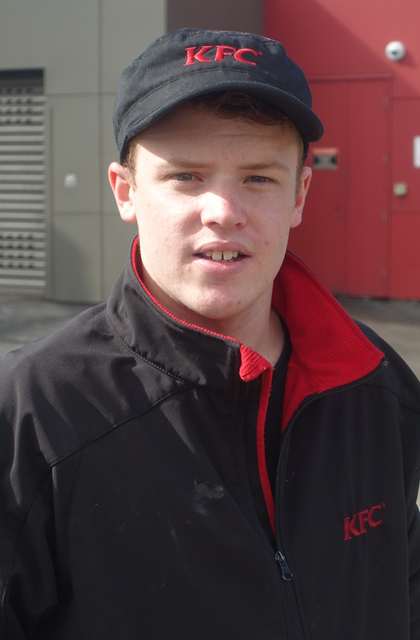 Chris, 19, works permanent part-time at KFC Kent Terrace and has just completed his first year at KFC, during which time he worked 30 hours a week as well as studying. He described the experience as “physically and emotionally draining.”

Asked about his main concerns, Chris said: “We do a lot. There are a lot of shifts and much of the time it is just me, and I don’t get paid enough for that. Living in Wellington is not that cheap.”

Although there is about 30 staff, Chris said “they are never rostered on working when they need to. They either work 3 hours here, or only on Fridays. It’s always in the mix. One of the major issues is definitely the staffing thing. They are saying we are not understaffed, but we clearly are. It’s just so busy all the time, and they are making record profits.”

Asked about the “modest” 10 cents an hour pay claim, Chris said; “honestly, when you think about it, 10 cents an hour is not much. In the long run it is not that great, but it is something. I think it is enough for them [Restaurant Brands] to say ‘OK they are standing up.’ It might just be a start, a stepping stone for something bigger.” 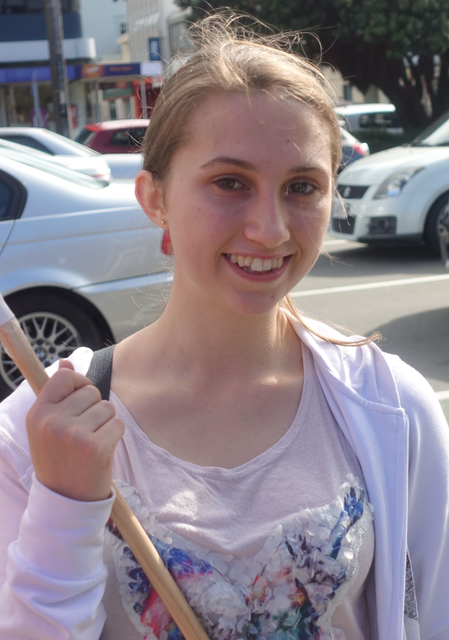 Olivia, 20, is a third-year Chemistry university student, was working part-time at KFC Kilbirnie. She said the main issues for her, more than just the pay, were understaffing, workload and rostering.

“It’s really ridiculous. Normally we don’t even get our 15 minute breaks. I did all the night shifts Saturday night and Sunday nights last year and for some reason I’m doing Sunday day shifts now. We do have set shifts now, which is good, but basically they are asking us to work all the time as well, and I don’t want to do that because of my studies.”

There are currently about 22 workers at the outlet but “tons of people left all at once. They just got sick of it,” Olivia said.

While the Kilbirnie shop had not been closed by the stoppage, she explained that her co-workers, many of whom were just new, were “behind the action.” Olivia said the workers did not get what they want from the company, they would be prepared to keep striking. “It’s a really good thing to do,” she concluded.