On March 8, with a one-sentence decision, the UAW Public Review Board (PRB) affirmed its December decision denying the request by a member of UAW Local 600 in Dearborn, Michigan for an audit and revote of the 2015 Ford contract ratification.

This was the eighth time the UAW rejected the Ford worker’s requests for an investigation into his charges that the UAW violated its own statutes and committed vote fraud. The UAW first heard the worker’s request for an investigation in November 2015, shortly after the vote took place. They told the worker he “lacked standing” to bring the issue before the International Executive Board. The worker then requested and was denied a copy of the ratification procedure from many UAW officials at Local 600 and Region 1-A. A Local 600 officer told him, “The document you are asking for doesn’t exist.” UAW Regional Director Rory Gamble never indicated denial or approval of the voting procedure that was used.

After taking the matter before the UAW PRB, the worker requested an oral argument in accordance with standard procedure. On November 14, 2016 the UAW PRB denied the worker the right to testify in his own case. The denial notice said: “The panel concluded that this appeal presented no issues of fact or constitutional interpretation concerning which the PRB’s understanding would be enhanced by oral argument from the parties.” 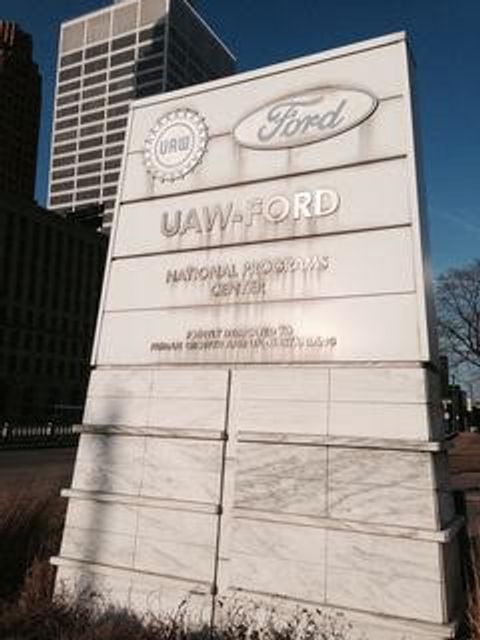 The Ford worker wrote in his rebuttal before the UAW PRB, “The ballots used in the ratification vote were not only unnumbered, they were made with a copier and no one had any idea how many were printed.... The elections committee should have challenged the ballots found clumped together rather than trying to explain this phenomenon with talk about a yardstick.

“The presence of one questionable ballot might be acceptable, but the failure to account for 500 ballots at the DTP [Dearborn Truck Plant] and another 300 in the M&C Unit [Maintenance & Construction] indicates corruption and dishonest behavior. If nothing deceptive were taking place, why did the local union fail to honor my original request for a recount of the ballots? Why didn’t the local union put the membership lists and ballots into the record?”

The UAW failed to disprove these connections. Instead, they dragged out the worker’s request for nearly two years, leading him through an administrative Alice in Wonderland.

In rejecting the worker’s appeal for an investigation of this evidence of fraud, the UAW PRB wrote:

“We will not retroactively reverse ratification of a negotiated contract that has been accepted by a majority of the covered employees based on procedural objections raised by a local union member or group of members. Such an order would disenfranchise the members who voted to ratify the agreement and thereby violate the very democratic practices we are charged with preserving.”

What hypocrisy! The PRB has the nerve to accuse him of disenfranchising his fellow workers by demanding a revote on a contract, which he demonstrated only passed because the UAW manipulated the vote.

This is what is known as a circular argument. If workers “ratify” a contract because the UAW rigged the vote, they are giving their stamp of approval to the rigged process. This begs the question: How is it possible for workers to reject a contract—and the process as a whole—if the UAW can ignore the actual vote and say it was ratified?

The review board also claimed the worker’s request for a fair election “is a misreading of the Constitution” because Article 38’s requirement that elections be “fair and democratic” does not apply to contract ratifications but only to the election of union officers.

The PRB claimed the UAW is not required to have any transparent procedures for ratification votes if the regional director follows some set procedure. “The UAW Constitution allows a local union broad discretion to adopt ratification procedures for negotiated contracts, subject only to the approval of the Regional Director.” However, the UAW failed to provide evidence that the regional director approved any of the shadowy procedures used during the vote at Local 600.

The fact that the review board resorted to such rotten arguments is proof it had no intention of seriously examining the worker’s evidence of UAW fraud. If the UAW had nothing to hide, the PRB would have had no problems refuting the worker with facts, transparency, and honest analysis.

The Public Review Board was constituted by the UAW in 1957 “for the purpose of insuring a continuation of the high moral and ethical standards” in the operation of the UAW. Its ostensible goal was to hear autoworkers’ claims regarding UAW constitution violations by the leadership. Its present four members are law professors with ties to the trade union bureaucracy.

The review board has a long history as a rubber stamp for the anti-democratic, anti-worker operations of the UAW leadership. It repeatedly rules against workers on phony technicalities. It is the place where workers’ grievances with the UAW go to die. In a July 2016 edition of Solidarity Magazine the UAW boasted, “The board heard 64 appeals in the last four years and in no instance has the union been found to have committed a serious ethical lapse.” 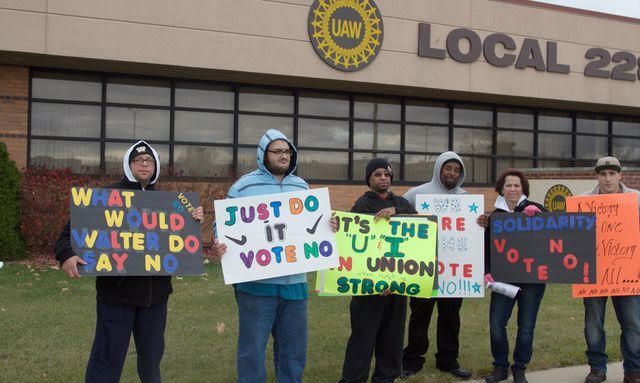 The UAW’s efforts to shut up autoworkers and prevent them from challenging the fraudulent 2015 contract is aimed at protecting the profits of the corporations and ensuring the “right” of the companies to exploit the working class however it chooses.

Under the fraudulent contract, Ford has subjected thousands of workers to temporary layoffs and “secret” terms not previously disclosed to workers. Third tier workers currently make $9 an hour at some Ford plants, for example, and speed-ups and dictatorial shop floor conditions dominate. If the vote was passed through fraud, that means the contract is not legally binding and the workers have been cheated out of thousands of dollars over the course of the life of the contract.

Their handling of the Ford worker’s appeal proves—for the thousandth time—that the UAW cannot be reformed. This worker followed all the UAW’s procedures at each step in the review process and his efforts were stonewalled and rejected. At subsequent contract votes at John Deere in 2016 and Caterpillar in 2017, many workers raised similar questions surrounding the legitimacy of vote outcomes.

The UAW is not a “workers’ organization” subject to the will of its dues-paying members, but a tool of the corporations. In exchange for imposing the dictates of big business, Williams, Settles and other top union executives are rewarded with seats on corporate boards, direct cash transfers from the auto bosses to UAW-controlled “training centers” and other business opportunities.

The degeneration of the UAW is the product not simply of the corruption of its top executives. It is rooted in the failure of its pro-capitalist and nationalist program and long-standing political alliance with the corporate-controlled Democratic Party.

To defend their interests, workers must build new, fighting organizations, democratically controlled by the workers themselves. Rank-and-file committees should be elected in every factory. These committees should bar UAW officials from their meetings and social media pages so they can have a free discussion without the interference of company agents and spies.

Rank-and-file factory committees will create the basis for a genuine unification of workers. They will establish lines of communication across all industries and workplaces to bring together all workers, black, white and immigrant, in the United States and internationally, in a common struggle to assert their social rights against the insatiable appetites of the super-rich.