Amazon and the CIA: a match made in hell

This is the second in a two part series, read part one here.

Prior to and during the C2S contract negotiations process, Amazon demonstrated its willingness to collaborate with the IC to stifle growing opposition to American imperialism and its spy agencies. In November 2010, AWS deliberately crashed WikiLeaks’ website after the organization began publishing the Cablegate documents.

After WikiLeaks had already published the Afghan and Iraq War Logs, numerous politicians had denounced the organization, with some calling for the execution of Assange. Right-wing Democratic Senator Joe Lieberman, who was instrumental in forming the Department of Homeland Security and served as chairman of the Senate Homeland Security Committee from 2007 to 2013, publicly called upon Amazon and other companies to sever ties with WikiLeaks, declaring, “No responsible company, whether American or foreign, should assist WikiLeaks in its efforts to disseminate these stolen materials.” Amazon dutifully complied, cutting off the public’s access to WikiLeaks’ web page. 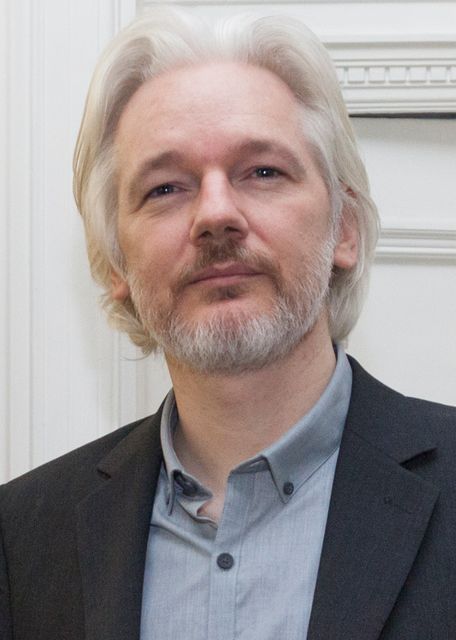 In response, WikiLeaks tweeted: “WikiLeaks servers at Amazon ousted. Free speech the land of the free—fine our $ are now spent to employ people in Europe.”

Amazon’s sabotage of WikiLeaks forced the organization to find a new server provider, and demonstrated to the state Amazon’s readiness to crack down on those opposed to the government’s criminality. This nefarious use of its power to control Internet communications no doubt piqued the interest of the CIA, which two years later would include AWS as a bidder for its private cloud contract.

In the summer of 2013, two months after Snowden’s first revelations of massive spying by the American government, Amazon CEO Jeff Bezos purchased the highly influential newspaper the Washington Post for $250 million.

After winning the Pulitzer Prize in Public Service in 2014 for its coverage of the Snowden leaks, in 2016 the Post became the first newspaper to call for the criminal prosecution of its own source. In an article headlined “No pardon for Edward Snowden,” the Post Editorial Board denounced those calling for Snowden’s pardon and demanded that he stand trial on espionage charges.

During the 2016 election campaign, the Post endorsed Hillary Clinton, the military and intelligence community’s favored candidate. Since the election of Trump, the Post has been one of the leading outlets engaged in a hysterical campaign of anti-Russia propaganda, intended to force the Trump administration to shift its foreign policy orientation toward continuing the drive to war with Russia begun under Obama. They have served as a direct conduit for the CIA and other intelligence agencies, repeatedly releasing sensationalist “breaking news” stories citing anonymous intelligence officials, in an attempt to stampede public opinion behind the right-wing campaign against Trump. 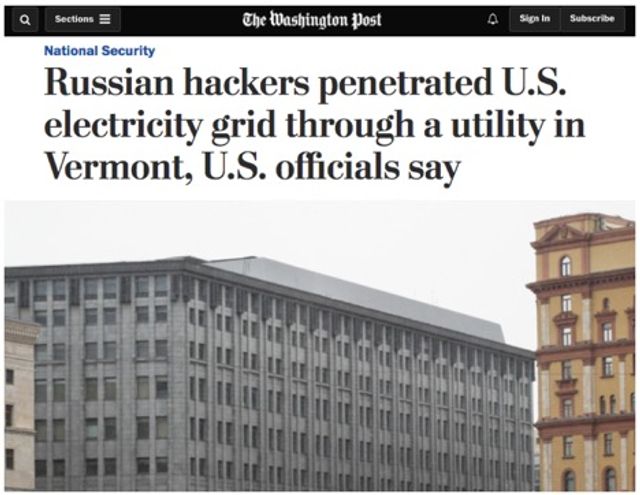 Undoubtedly, AWS’s undermining of WikiLeaks, combined with Bezos’s purchase of the Post and the increasing dominance of Amazon as a multinational corporation, influenced the CIA’s decision to award the C2S contract to the company. The company was recognized as a willing and competent ally in the fight to suppress free speech and democratic rights.

Cementing ties between Amazon and the military

In September 2013, while the Court of Federal Claims was determining whether the CIA would need to re-open the bidding competition between Amazon and IBM, AWS went ahead and posted more than 100 job listings for engineers possessing the highest security clearance offered by the US government, “Top Secret/Sensitive Compartmented Information.”

The jobs were listed for an AWS center in Herndon, Virginia, a 20-minute drive from CIA headquarters. Last month, Amazon announced that it will be locating its new AWS East Coast corporate campus at One Dulles Tower in Herndon, and are expected to employ up to 1,500 tech workers at the campus. The company situates most of its data centers in the northern Virginia area, through which an estimated 70 percent of global Internet traffic flows.

Further developing its connections to the state, in 2015 Amazon partnered with the Department of Defense (DoD) to create a program titled “AWS Military Fellowship,” in which active-duty military personnel spend time working for Amazon. The company currently has at least three soldiers working at AWS.

In its statement announcing the program, Amazon wrote that it is intended to “build a unique cadre of officers who understand not only the profession of arms, but also the nature of the strategic problems facing the DoD, and the organizational and operational opportunities made possible by revolutionary changes in information and other technologies. These officers will be at the forefront of transforming defense strategy, military forces, and the supporting infrastructure.”

In March 2016, Secretary of Defense Ashton Carter visited Amazon headquarters in Seattle, “as part of a West Coast swing aimed at strengthening ties between the Department of Defense (DoD) and the tech community,” according to an Amazon blog post on Carter’s visit.

Carter first met with the AWS Military Fellowship employees, then held a meeting with Jeff Bezos and other key figures in AWS leadership, “to discuss innovation topics and ways to strengthen military exchange programs and partnerships with the technology industry,” the report notes. Reports also suggest that there were discussions of expanding the Pentagon’s use of AWS cloud-computing technologies.

During his West Coast tour, Carter also announced the formation of the Defense Innovation Advisory Board, which would be headed by Carter and Eric Schmidt, the executive chairman of Alphabet, the parent company of Google. In July 2016, Bezos was invited to join the board, whose purpose is to further integrate leading figures from the technology sector with the military. It is a component of the broader “Third Offset Strategy,” which seeks to maintain the global supremacy of the American military over potential rivals, in particular Russia and China.

Announcing the program, Carter declared that the board is “charged with keeping DoD imbued with a culture of innovation in people, organizations, operations, and technology ... and also to ensure that we’re always doing everything we can to stay ahead of potential adversaries.”

Over the past year, the board has met with leading figures in the military, including at the headquarters of U.S. Central Command and U.S. Special Operations Command in Tampa, Florida. In early January, the board voted to approve 11 recommendations to enhance the military in areas ranging from strengthening cybersecurity for advanced weapons to increasing funding for artificial intelligence research. 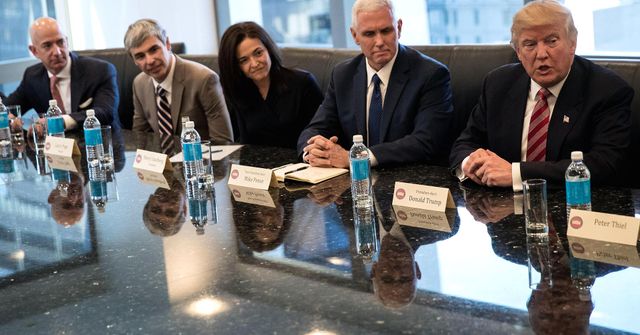 During the 2016 election campaign, Bezos made mild criticisms of Trump, who accused the Post of being a “fake news” outlet. Since Trump’s inauguration, however, the two have reconciled their differences, with Trump appointing Bezos to the American Technology Council that he formed in May. Bezos and the 18 other tech executives on the council met cordially with Trump in June.

The fight against Amazon requires a struggle against imperialism

The integration of Amazon with the state and its spy agencies typifies a broader trend of modern capitalism, in which all of the major corporations closely collaborate with their respective governments and facilitate imperialist war abroad. This is one of the defining features of imperialism.

Under the catch-all justification of protecting “national security,” a euphemism for upholding the global interests of the American capitalist class, the military-intelligence apparatus has carried out unremitting atrocities abroad and erected the infrastructure for a police state within the US. Since its contract with the IC in 2013, Amazon has directly facilitated these behind-the-scenes machinations. 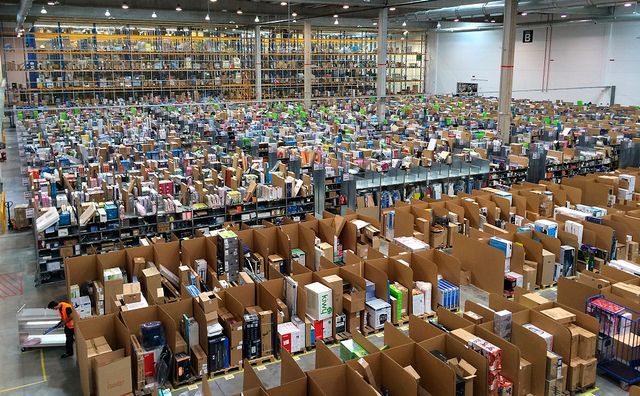 As Lenin noted in the Preface to his 1917 work State and Revolution, written during World War I and in the midst of the Russian Revolution, “The imperialist war has greatly accelerated and intensified the transformation of monopoly capitalism into state-monopoly capitalism. The monstrous oppression of the laboring masses by the state—which connects itself more and more intimately with the all-powerful capitalist combines—is becoming ever more monstrous. The foremost countries are being converted—we speak here of their ‘rear’—into military convict labor prisons for the workers.”

Amazon exemplifies these characteristics described by Lenin. While collaborating with the spy agencies to wage war abroad, Amazon subjects its workforce in the US and around the world to brutal sweatshop working conditions.

As the International Amazon Workers Voice (IAWV) has reported, the company pushes its workers to their utmost limit, causing widespread workplace injuries and even fatalities. It tracks employees’ movements and enforces ever-increasing productivity requirements, creating conditions at Amazon warehouses that increasingly resemble the “convict labor prisons” described by Lenin.

The struggle to put an end to class exploitation and war are inseparably connected. There can be no fight against war without a fight against its root cause, capitalism and its division of the world into rival nation states. The resources squandered on imperialist war and the spy agencies, and the immense wealth accumulated by figures like Bezos, must be seized by the working class and redirected to provide for social needs, not private profit or the destruction of foreign countries.