The lack of systematic aid by the US government to its Caribbean territory of Puerto Rico in the aftermath of Hurricane Maria and President Donald Trump’s dismissive response has evoked widespread disgust among working class New Yorkers.

Scores, if not hundreds, of aid centers and relief efforts have popped up around the city in the last week as the scope of the crisis has become clear. Workers and middle-class people are donating food, water, blankets and medical supplies throughout New York. Donations are reportedly being collected much more quickly than they can be shipped to the island and distributed to those in need there. 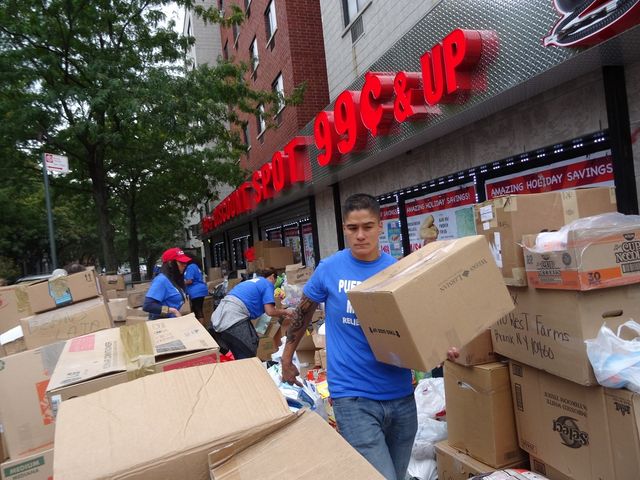 Part of the relief effort

Of the 5.4 million Puerto Ricans living in the 50 states, the region of New York, New Jersey and Connecticut has the highest concentration, with 1.8 million residents. Puerto Rico itself has a population of approximately 3.5 million.

World Socialist Web Site reporters went to one of the aid events on Saturday in the South Bronx to speak to those donating supplies. The Bronx is the poorest urban county in the United States, and the South Bronx has historically been one of its most depressed areas. It has a large percentage of Puerto Rican residents.

Reporters witnessed a scene that has repeated itself in the last two months all over the United States and in the Caribbean from Hurricane Harvey in Texas to Hurricane Irma in Florida and now Hurricane Maria. The help and aid to those stricken by disaster is coming largely from the working class, while the official state institutions offer too little, too late.

People waited in their cars for hours to donate supplies they had purchased or collected; volunteers lifted boxes and packed crates. Local Democratic Party politicians came by, primarily for photo ops, but the working class supplied the brain and muscle.

One volunteer, Louis Reyes, told the WSWS, “I have been working for hours as a volunteer to help get these donations to Puerto Rico. It is the poor in the South Bronx who are donating their time and money to help the poor people of Puerto Rico. 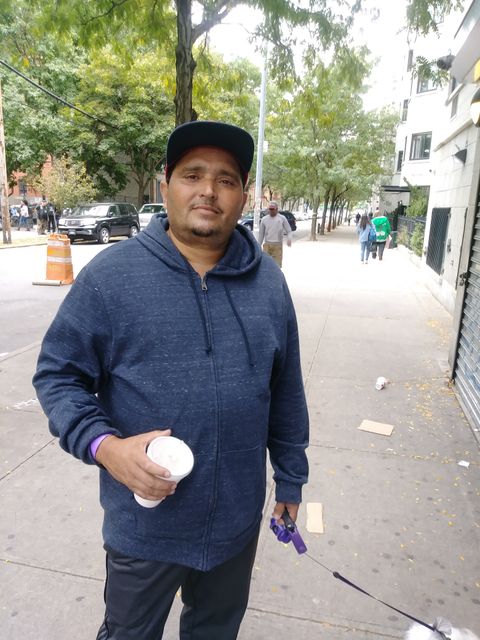 “These people are doing more than Trump is doing. Trump is worrying more about the football players who don’t salute the flag then helping the poor of Puerto Rico. He is finding one excuse after another as to why nothing is being done. He is more worried about his tax plan which will give tax cuts for the rich,” Reyes noted.

“I have family in Puerto Rico, sisters and brothers, aunts and uncles. They still have no lights, no food, no water, no gas for their cars to go get the food and other supplies. They are thirsty and hungry,” he explained. “They are very upset about the lack of response from the government. A lot of cargo is sitting at the ports and not being distributed to those in need of them.”

Andy and Yari Toledo were at the relief collection volunteering before going to pick up their child from the nearby school. Yari has family in Puerto Rico, in Toa Baja, 20 minutes from San Juan, near the north shore.

“I was able to get in touch with them and they were OK. But they need water, they need electricity,” Yari reported. “I was able to reach them because when they went out at 5 a.m. to try to get gasoline, people were able to put up cell towers. There has been a big miscommunication from the governor who said there were no drivers for the trucks to carry fuel and aid from the port. But people were even walking to volunteer to drive the trucks.”

Andy was quick to blame the federal government for its lack of action. “It took 10 days to get the Jones Act out to have foreign ships help bring in needed aid. We are seeing a political moment. We are seeing Puerto Rico’s colonial relationship with the US.”

“Trump says Puerto Rico owes a lot of money. That says a lot, to be talking about it when they need help. About 20 years ago there was a financial collapse in Argentina. Wall Street allowed an arrangement and the debt was restructured. It goes to the heart of the colonial relationship that they won’t do this for Puerto Rico. It resonates with ‘guilty as charged,’” Andy exclaimed.

A WSWS reporter pointed out that Puerto Rico had been pushed into debt and financial dictatorship during the administration of Democratic President Barack Obama. Andy agreed, noting, “Obama and Clinton were part of Wall Street. People bought into Trump saying he would clean up the government. But now Trump is only lowering taxes for the rich. Houston is already seeing profiteering on the land devastated by Hurricane Harvey and now the rich are profiteering in Puerto Rico. They will wipe out the houses, like in La Perla, a historic area. Real estate vultures are buying up land. For years they have been trying to privatize the electric grid.”

Wearing the blue shirt of the volunteer workers, labeled “Puerto Rico and Mexico relief effort,” Jesus Robles, a retired postal worker, sat on a bench in the park at the end of the block where donations were being sorted, boxed and loaded onto trucks. 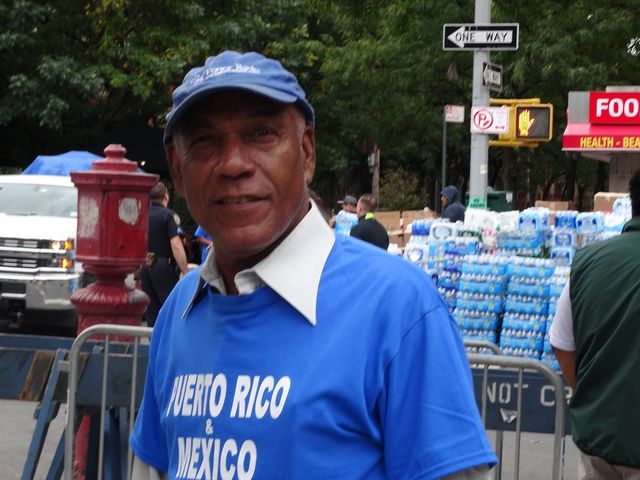 “I was working here earlier,” he said. “But I’m 62 and need to stop. I help out whenever there are some aid efforts in the neighborhood. My sister and brother-in-law are in Puerto Rico, toward the North Coast. I have not heard from them. My calls would not go through. When I am seeing the news, it makes me cry.”

“Trump is no good! Are we less citizens there than here?” Robles asked. “But the rich minority rules. You can see here who is doing good for Puerto Rico—their own people.”

A veteran wearing the jacket of the “Wounded Warrior Project,” Ricardo Garcia, stopped briefly from his work to talk to the WSWS. “Puerto Rico is being run for the corporations. It is obscene. Trump temporarily lifted the Jones Act but he will not get rid of it.”

Vanessa Garcia commented, “This relief collection has nothing to do with the government. This is like Katrina. Katrina was in 2005. Go to New Orleans today and look at the 9th Ward. It is just like it was after Katrina destroyed it.” As the reporting team was leaving, she called out, “Expose everybody!” 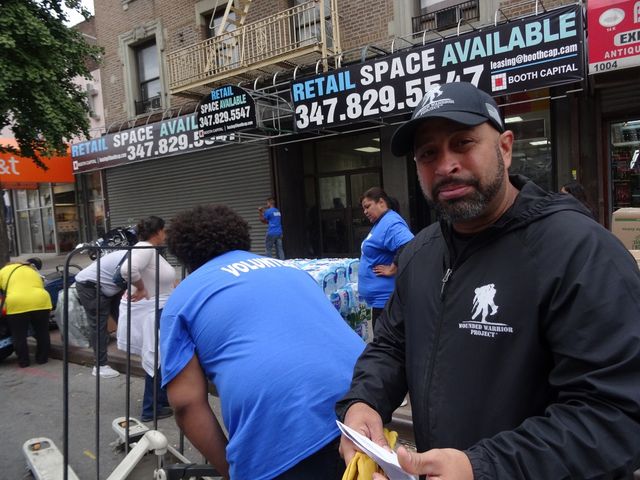 Flora Rivera was delivering relief goods in his car. He told the WSWS, “I called my family there on Thursday, but there was still no communication system to connect with. One bridge has collapsed near where they live in Narajita. This is in the middle of the island. My family in Florida told me they had survived.”

“The politicians take everything for themselves. They give garbage to the people,” Rivera noted angrily. “Trump didn’t go to Puerto Rico. He just stayed in Washington and tweeted. As a businessman, he thinks only of himself. Politicians have two licenses: One to steal, one to lie. The businessmen on the financial board ruling Puerto Rico are racketeers. They just think about themselves, not the poor. In Latin American countries, it is all the same.”

Brenda Ortiz was part of a convoy of seven or eight cars bringing supplies from Public School 97, where she is a paraprofessional teacher. She said, “I haven’t been able to talk to my family in Puerto Rico. The bridge from San Sebastian has collapsed, so they couldn’t cross the river. They are now using a metal wire to cross the river. Despite this, they don’t mention anything about what is going on there in the news.

“The response by the US government is horrible. It has been nine or 10 days now. The people are hungry with no food to eat. The people are thirsty with no water. There is no communication, and no one knows what is going on. There is price gouging, with doubling the cost of airline tickets. But the president is talking about the NFL or tax cuts when a life-and-death crisis is going on in Puerto Rico.”

Jennifer Nadeau and her son Damien had walked to deliver supplies even though she had just been laid off from work. She said, “What has happened in Puerto Rico has affected me. I am 100 percent Guatemalan, and I just want to help everybody. I brought some supplies to be sent to Puerto Rico, and I hope they will get through to the people who need them.