Last week, the Lower Parliament Hall in St Andrews, Scotland hosted a debate, “This House Believes That Capitalism Has Failed”, organised jointly by St Andrews University Union Debating Society and the university’s Economics Society. The national secretary of the Socialist Equality Party in Britain, Chris Marsden, was invited to move the motion.

Thursday’s debate was run with great attention to democratic proceedure before an engaged and attentive audience. Speakers were given between seven and 10 minutes to outline their position. 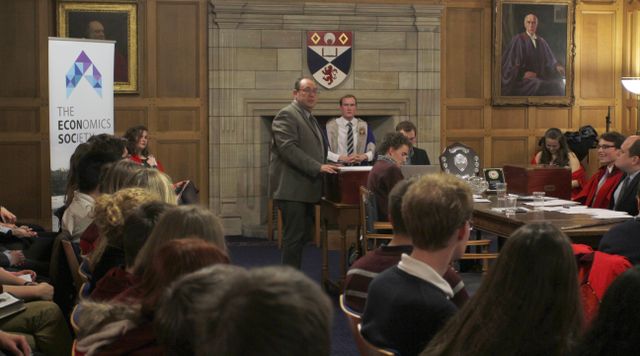 Chris Marsden speaking at the debate

Marsden cited utilitarian philosopher Jeremy Bentham’s declaration that the measure of what is right and wrong is what guarantees the “greatest happiness of the greatest number.” On this basis, the “only verdict that can be delivered” as to the success or failure of capitalism “is one of abject failure.”

Marsden cited figures showing the extraordinary social polarisation as the “entire wealth of society is funnelled into the bank accounts and investment portfolios of a tiny layer of the super-rich.”

“Capitalism’s apologists insist that this does not matter, as long as life for the rest of us gets better. But life gets worse by the day,” he noted. “Nearly half of the world’s population—more than 3 billion people—live on less than $2.50 a day. More than 1.3 billion live on less than $1.25 a day.”

Marsden explained “the fundamental driving force for the eruption of social inequality is a system based on class exploitation that in turn drives the capitalist class in a relentless global search for markets and resources as new sources of super-profits.”

The “cut-throat competition between the major powers, corporations and banks to dominate the globe… gives rise to the twin evils of fascism and war,” he continued.

“Fully 160 million people died in wars during the 20th century… Even that horrific figure would be dwarfed if [US President] Trump and his coterie of generals, with the Democrats behind them all the way, made good on their threats against North Korea and China.”

Marsden concluded by stating, “Capitalism has failed. The question is what must be done about it? With what must it be replaced and how?

“…This year is the centenary of the October Revolution, the first time in world history where, in the midst of world war, the working class gave a practical answer to capitalism’s bankruptcy and made good on Marx’s declaration: ‘The philosophers have only interpreted the world in various ways—the point however is to change it’.”

Supposedly speaking for the motion before Marsden was Joshua Osborne, campaigns officer for the Labour Party at the university. Instead he began by explaining that he did not agree with it.

Rather than capitalism having failed, Osborne insisted instead that only a certain model of capitalism was failing. “We need to realise that capitalism is not working currently, we need reform… an economy based on ever rising house prices is unsustainable and goes away from a capitalism that has worked previously.”

“Capitalism can only work when regulated by the state and can provide fair opportunities for everyone,” he said.

Three times in his nine-minute contribution, Osborne insisted he was not a communist, nor was he advocating communism. This left Marsden in the unusual position of arguing against his nominal platform ally and beginning his contribution by reminding students of what the motion stated!

Both speakers against the motion put forward right-wing and libertarian views, couched in terms that claimed that untrammelled capitalism somehow served the world’s population.

Malcolm Risk, a member of the university’s debating team, informed his audience that capitalism had “lifted hundreds of millions of people out of poverty.” But to truly take advantage of capitalism meant curtailing democratic oversight, as “governments are susceptible to nativist lobbying in a way in which the free market isn’t. Government, because we live in democracies, are going to pander to their own people and are not going to help the global poor and the globally dispossessed actually gain a leg in the world.”

Moving blithely on from his assertion that capitalist CEOs and billionaires are devoted to assisting the world’s poor, Risk returned to his anti-democratic theme. “Governments”, he complained, “are ultimately incentivised to pay attention to their short-term political interests and mortgage the future of their populations so that they don’t have long term success.” Risk’s solution was to “take these things out of the hands of the government.”

The audience at the debate

Ross K Allan, who campaigned for Vote Leave in the 2016 referendum that took Britain out of the European Union, also spoke against the motion.

Vaulting airily over centuries and epochs, Allan asserted that “command and control systems, [which] you can have as fascism, you can have as feudalism, you can have as communism, or Marxism” contributed to “bad decisions.” This was because under capitalism, “every exchange of goods is voluntary... both sides are benefitting from that and society as a whole has improved from that single trade.” Therefore “every system that is not market based… has to be harmful.”

Two-minute contributions could be made from the floor, during which several admirers of a system from which they have benefitted greatly spoke while others took their cue from Labour’s Joshua Osborne and urged an abstention.

Among those speaking in favour of the motion, one student opposed the claim that capitalism is based on “free exchange… you can’t abstain from selling your labour, you can’t not work for someone... I came from the United States, the most capitalist country in the world. I defy any of you to go to the States without millions of dollars in pocket change and fall and break your leg outside of somewhere with socialist healthcare like the NHS. I pay $1,000 a month to keep me alive for services that are free here as a right to be alive.”

Another said, “I honestly believe that capitalism has failed. If you look to Hong Kong... there is a housing crisis in Hong Kong. It will cost me the equivalent of £200,000 to buy a 400 square-foot apartment. How is that fair, when the rich people can afford to pay what they want to buy penthouses?”

The motion was defeated by 28 votes to 52, with 20 abstentions—a victory of sorts, given the privileged social composition of St Andrews’ student population and a sign of growing political disenchantment and oppositional sentiment in the generation now reaching adulthood.

Some students stayed to discuss with Marsden and with SEP members in attendance. Jacob commented, “Mr. Marsden did an excellent job presenting a factual, evidence based account of what the failure of capitalism looks like in real terms. The opposition were reduced to arguing that we can reform away capitalism’s systematic failures. Failing to be persuasive even on this matter, they deigned to suggest that capitalism is the best system we have. Such tired arguments expose the absolute bankruptcy of bourgeois ideology: Capitalism offers no solutions to the perpetual and ever-intensifying crises in which it is embroiled.”