A would-be “black comedy,” directed and co-written by George Clooney, Suburbicon is set in 1959 in a bland suburban community.

The first involves the Lodge family. One night, two thugs invade the home of Gardner Lodge (Matt Damon), his wife, Rose (Julianne Moore), and their son, Nicky (Noah Jupe), ostensibly as part of a robbery. They chloroform the family members, but Rose dies of an overdose. Her twin sister, Margaret (also Moore), then becomes a kind of stepmother to Nicky. 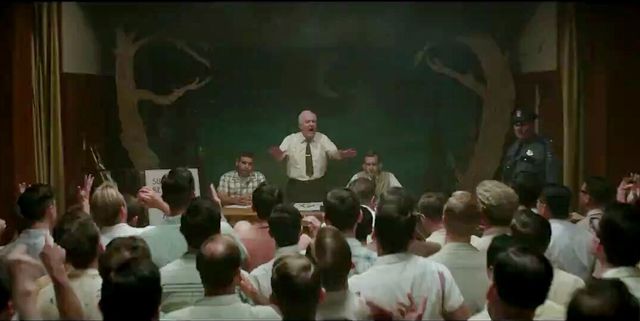 It soon becomes evident that the “robbery” was staged by Gardner so that his wife could be done away with and he would be free to pursue a relationship with Margaret. Nicky eventually catches on to this too. The criminals become angry with Gardner because he hasn’t paid them for their efforts. An insurance agent, Bud Cooper (Oscar Isaac), whose company is on the hook for a large claim on Rose’s life, shows up and makes clear that he sees through the plot. Things thereupon get sadistically and pointlessly bloody.

Meanwhile, an African American family, the Mayerses (Leith M. Burke, Karimah Westbrook and Tony Espinosa), has moved into the previously all-white community where the Lodges live. Angry residents protest outside their home. The mob grows larger and larger, and ultimately turns violent. A riot occurs the same night as the Lodge family drama explodes into mayhem.

Suburbicon has very few redeeming features. Many of the principal figures, including Gardner, Margaret, Cooper, the two thugs and, of course, the members of the mob, are thoroughly detestable. It is not clear why we should concern ourselves with their respective fates. The violent conflicts and confrontations, which occur for the most part between equally dislikeable characters, generate little interest.

The Lodge story, even considered as a parable, doesn’t really make any sense. Gardner, a cautious white-collar worker, proceeds in a manner guaranteed to get him either caught by the authorities or dispatched by his hired assassins. It doesn’t seem a good idea to employ a couple of psychopaths and then refuse or be unable to pay them. The thugs themselves do not seriously function as one would imagine cold-blooded, professional killers to act.

With the exception of Nicky, every white person in the suburban community we encounter is either a sociopath or a bigot, or both. Does Clooney intend us to take this seriously? Suburbicon is mean-spirited, unfunny and clumsy. It has not been well received even by American film critics, whose standards are so low these days as to be nearly invisible.

The film’s script was apparently first worked on by Joel and Ethan Coen in the 1980s. It originally included only the murder-insurance strand of the plot. Clooney and his collaborator, Grant Heslov, added the neighborhood opposition to the black family, the refusal of local stores to serve them and the final riot. 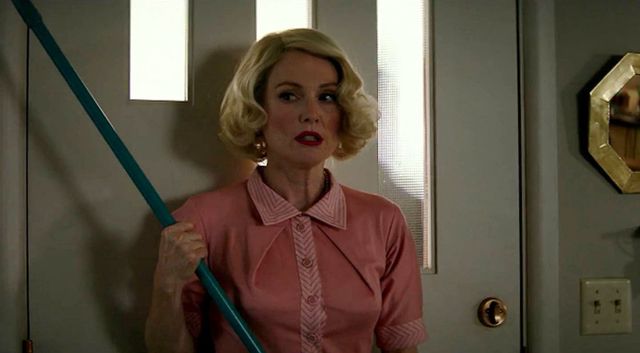 Clooney told the Atlantic: “I got an idea about sort of mixing these two [stories] up and having everybody looking in the wrong direction. I thought it would be the fun way to talk about these issues … [Suburbicon] was really written as a piece to talk about the idea that there’s a group of white Americans who are terrified that they’re losing their place in society and are blaming minorities for it.”

He added, “I think it’s really important to remind ourselves that every time we see these things, this [racism] is ingrained in our soul, and it’s part of our original sin, and it’s something that we still have to exorcise.”

Clooney should speak for himself. His viewpoint here jibes with the general efforts of the Democratic Party and its pseudo-left hangers-on to paint the mass of the American population as hopelessly backward, if not overtly racist. Indeed, the election of Donald Trump, partway through production of Suburbicon, darkened the film, according to both Clooney and Heslov.

If Suburbicon had been directed by the Coen brothers, it would probably not have been any less misanthropic, but it might very well have been a bit more elegantly executed.

The two dramas sit unpleasantly side by side in Clooney’s film and never cohere or convince. Almost no one comes off well here, including the generally reliable Julianne Moore.

In the proper circumstances, Clooney is an appealing and often amusing performer. In the 1990s, I once referred to him, in an unkind moment, as “a walking smirk.” However, the 2000 election and the ascension of Bush-Cheney, the Afghanistan and Iraq wars and accompanying tragedies pushed him to do more valuable work, as an actor, a director, or both: Good Night, and Good Luck (2005), Syriana (2005), Michael Clayton (2007), Burn After Reading (2008) and The Men Who Stare at Goats (2009).

The election of Barack Obama had the effect on Clooney, as it did on the liberal Hollywood milieu as a whole, of largely sealing up whatever was critical in his psyche. Clooney, a frequent visitor to the Obama White House, became an unofficial member of the administration, a spokesman on “human rights” issues and advocate of UN and US intervention.

In October 2010, for instance, Clooney had a meeting with the president on the crisis in Sudan. The New York Times reported: “Mr. Clooney reported to Mr. Obama on his recent week-long tour of the Texas-sized southern Sudan; preparations are lagging there for a referendum in January that is expected to result in residents favoring independence from the Khartoum government but which could end up reigniting civil war and atrocities.”

Speaking to the media following his conversation with Obama, Clooney “praised the president” for his Sudan policy, “But Mr. Clooney urged continued, tough diplomacy by world leaders.”

In 2012, the actor stopped by at the White House again, also to discuss the situation in Sudan. “Asked about Obama’s chances for re-election,” the Washington Post noted, “Clooney, who has donated money to his campaign, said: ‘I hope they’re very good. I’m a Democrat and a supporter of the president. I hope he has a successful election.’”

Whatever an actor or artist may think, joining the establishment, and a deeply reactionary and crisis-ridden establishment at that, has consequences. The last three films the fabulously wealthy Clooney has directed, The Ides of March (2011), The Monuments Men (2014) and now Suburbicon, have been largely lifeless. 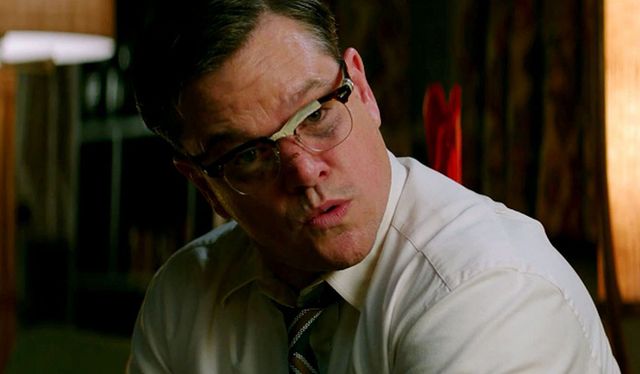 Clooney and Heslov based their race-related sequences on events that took place in Levittown, Pennsylvania, not far from Philadelphia, in 1957. The planned community was officially white-only (actually, Puerto Ricans, American Indians, Asians, mixed race couples and even black families with light skin already lived there!) until a Jewish couple from the Bronx resold their home to a black couple, William and Daisy Myers. Protests erupted, the vacant house next to the Myers’ home became the headquarters of the “Levittown Betterment Committee,” which unfurled a Confederate flag and provocatively blasted loud music, and, in the end, a small-scale riot, in which stones were thrown at police, broke out.

However, in an excerpt from her memoir included in Second Suburb: Levittown, Pennsylvania (edited by Dianne Suzette Harris), Daisy Myers presents the events in more complex terms than Suburbicon cares to. She refers at one point to a press conference the Myerses held at which she asked the reporters, “Why don’t you newspapermen write about the good things happening to us? One hundred fifty Levittown people have written us letters. Other Levittowners have mowed our lawn, hung our curtains, presented us with a fine oil painting, brought cakes and fruit, and kept us busy receiving well-wishers.”

A white teenager arrested outside the Myers’ home during the subsequent riot wrote the family a letter, which Daisy Myers observes she and her husband particularly valued, explaining that he had been picked up by mistake: “I wanted to let you know that I harbor no malice against you or your family, and I was never once among the mob … I have no objection to you living there, as I am sure most of your neighbors don’t object. I hope you can believe this and do not think that I was one of the rioters.”

The Myerses received mail from all over the world expressing support. Daisy Myers writes, “As the opposition continued, we were blessed by the many deeds of kindness toward us. Many additional Levittowners let us know we were welcome. … Visitors continued to come. A friend I had known previously from the Country Club section [of the community], who had a full-time servant, came and scrubbed my floors.”

Daisy Myers does not paint the entire incident in pretty colors, nor is there any need to. In a comment written in 2007, at the age of 86, she wrote, “Levittown was like a wound that healed and left a scar, with some goodness and some sadness. That’s true even today. But it gave me a better understanding of people and where they came from.” If only one could say the same about Clooney’s film.